Home F1 Ricciardo features on ‘The Ellen Show’ to about talk F1 & Drive... 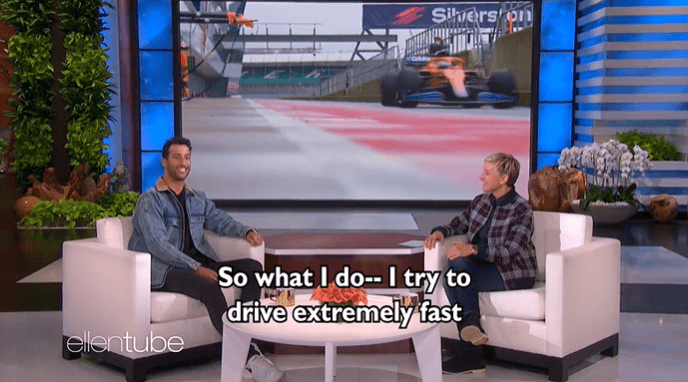 Daniel Ricciardo featured on the Ellen DeGeneres’ ‘The Ellen Show’ this week to talk about F1 and also Netflix’s Drive to Survive show.

The Ellen De Generes show had an unexpected guest this week when the popular Australian driver Ricciardo dropped in for an interview. At the outset, the host advised that her brother-in-law would be very jealous as he wanted to be there for the interview as he is a huge fan and has been to each Grand Prix except Monaco.

DeGeneres advised that she herself knew nothing about the sport but started watching the F1 series “Drive to Survive” on Netflix and found herself unable to stop watching the series. One might go as far to say that she has become a fan like her brother perhaps.

Ricciardo himself goes to say that he drives as fast as he can all around the world and F1 itself is a travelling circus of speed and adrenaline. In the background there is a high screen depicting Ricciardo driving, particularly at Monza two months ago where he achieved his latest win.

He goes on to state that it’s a sport, it’s fun, it’s high adrenaline but it can be difficult to understand due to its nicheness. He then furthers the discussion by advising about the tightness of the schedule they undertake. DeGeneres is in awe of this and questions how drivers can adjust to this with schedules and jet lag to also consider.

Ricciardo admits it is hard but tries to adjust before they go to a specific destination so they are acclimated to the particular one in question. Furthermore, he notes that because the sport is so high adrenalin, it is possible to operate without much sleep.

The conversation moves on to a discussion about the speed of the cars and the G forces drivers experience while in the cockpit. He goes on to talk about the level of fitness that drivers have to sustain and in the middle of this, Ricciardo finds it amusing that DeGeneres says “Y’all” having just been in Texas.

They talks about the race duration and further discusses G Forces and the effect they have on the drivers bodies in their cars. He also stated that drivers can lose up to 10 lbs in weight during races. They also amusingly discuss peeing in a car while racing, something Ricciardo admits he has never done.

The discussion concluded with a brief chat around Drive To Survive about the amount of series so far and when the next series will be airing, possibly March 2022. DeGeneres concludes the interview by advising that the series is being streamed right now on Netflix and opening advises people will like it even if the believe they won’t.

This is the second TV talk show that Ricciardo has been to after he featured on the Trevor Noah show, which was also to promote Netflix’s Drive to Survive. For DeGeneres, the Aussie wasn’t the first F1 driver as she hosted Lewis Hamilton too, some five years ago.

I didn’t know how much I loved Formula One until I started watching #DrivetoSurvive, now I can’t get enough of it or of @DanielRicciardo. pic.twitter.com/cVCa1iERKS