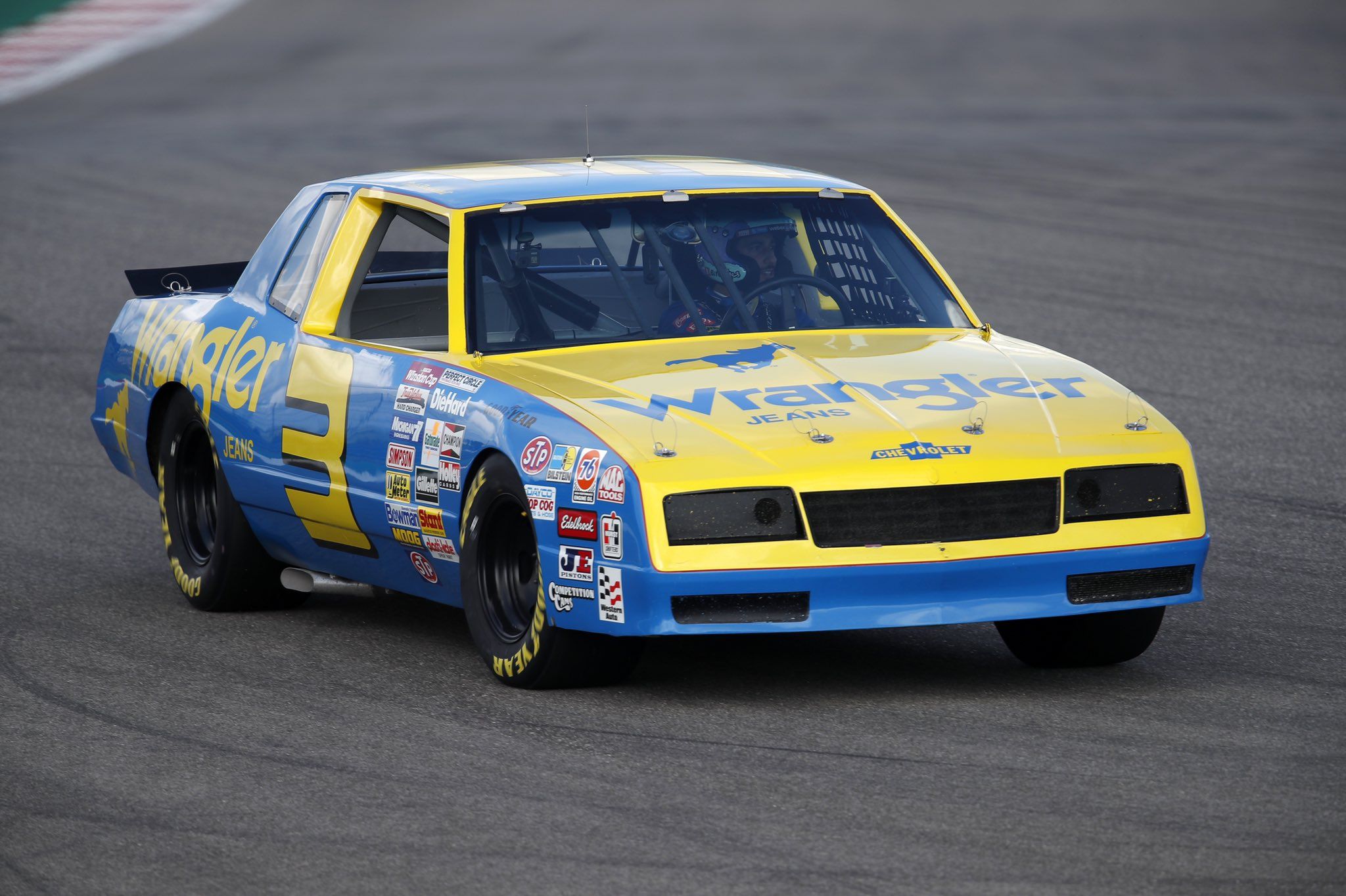 Daniel Ricciardo was elated having driven a NASCAR machine during the F1 US GP weekend as he relayed his feelings about the car plus also his helmet, while Zak Brown talked how he got the car in the first place.

It was a happy moment for Ricciardo in last weekend’s F1 US GP when he got to drive the #3 Wrangler-sponsored Chevrolet Monte Carlo of Dale Earnhardt Sr from the 1984 season. The Australian is a proper fanboy of the American driver.

The bet of a drive came from McLaren Racing boss Brown, who put Ricciardo under pressure lens. The Australian had to register a podium finish in 2021 and he would get to drive the #3 NASCAR machine – and he did better, he won the Italian GP.

With the US GP happening this time, it was logical for Brown to have the car on American soil and let Ricciardo lose around the Circuit of the Americas. The Australian was certainly chuffed with the chance and the subsequent drive as he was smiling all-through.

“I think everyone is glad that I wore a face helmet,” started Ricciardo to media including FormulaRapida.net. “It was sick, it was so much fun. It was just so different as well. I am definitely get my kicks out of it just because it is so raw and foreign. The noise, kind of smashing gears, the driving position – everything’s quite unique.

“And it’s Dale’s car – one of my all-time heroes, so that was surreal. It was good fun. And I think to do it here as well – if we had rented a private track somewhere in England, I don’t know, it wouldn’t have had the same effect. So I’m really grateful that Zak flew it out here,” summed up Ricciardo, who was then alerted about the Twitter message from Earnhardt Jr, who appreciated the Australian’s gesture.

“I’m happy for Daniel,” wrote Earnhardt Jr. “I’m also appreciative for how he celebrates my father. That makes a lot of dads family members and fans smile.” When Ricciardo told about this, he was pretty stoked and pumped up, as usual.

“I immediately got goosebumps when I was told about it,” said Ricciardo. “Honestly, if we’d been in a private setting and Dale Jr told me that one-on-one, I think I’d probably have cried a little bit. It was pretty crazy – like, happy-crazy – to be appreciated by that family in general. I’ve been such a fan. After Senior, I was a massive fan of Junior.

“I was watching every NASCAR race for years. I’d wake up and watch Junior try and win the 500 every February. It was pretty cool just to be recognised and appreciated for having support for his dad,” summed up Ricciardo, who went on to rely the first time the Australian ran a special helmet in dedication to Earnhardt Sr.

“It does and that’s why and I think with something like that, I ran the famous #3 in his font on my helmet in that first year when we had our number,” recalled Ricciardo. “And I remember speaking to Dale Jr., I was like, ‘Do I ask if I can do it?’ Even before I asked, he was like, ‘That’s so cool, we really appreciate you.’ But I didn’t want to do it if…but I was also confident enough in my ‘fanboy’.

“I’d followed Dale for so many years as a kid, and then Dale Jr., so I was confident that if I got questioned about it I could speak truly and truthfully about it. And to bring that into F1 – it’s a bit like myself and Lando with Valentino Rossi. He’s got nothing to do with F1 but he’s a huge figure in motorsport and I appreciate that. It’s the same with Earnhardt. It is kind of cool that we always loved Senna era and it kind of flew through us,” summed up Ricciardo.

While there was definite elation for Ricciardo, McLaren chief Brown took time to recall the memory of buying the #3 NASCAR after having watched it as a kid. Its been three years since the American has the car with him in his huge collection room.

“With all the cars I collect, they all have some sort of special memory and my memory behind that is when I grew up, going to races just as a fan, first one springs to mind is 1981 Long Beach GP, then my father used to take my brother and I to watched 2-3 NASCAR races and we saw few GT races and then we saw some drag race back with John Force in action and at my age, that made such a huge impression as a young kid,” started Brown to media including FormulaRapida.net.

“I have ton of respect for these different forms of motor races and NASCAR in particular, Dale Earndhardt Sr is a legend and I remember the Wrangler car which Ricky Rudd started in 1983 with the Piedmont sponsorship, then in 1984 and 1985 it ran in different liveries with sponsorship with Dale Sr and he won 4-5 races in the car. And so the avid collector I am, I needed a NASCAR [for my collection].

“And if we are going to get a NASCAR, then why not get one that I actually saw races win and it was driven by arguably the one of if not the greatest NASCAR driver of all time and a lot of the time these cars, you have to be opportunistic, sometimes you seek them out and other times it comes across your desk, as you are known as a collector and so quite often I say thanks but no thanks, when this came up and yeah this is, either you want the Richard Petty STP car or Dale’s Wrangler car, so it was cool when I saw it race,” summed up Brown.