Home In the Spotlight Petrucci gets emotional by mum’s call; Miller reveals switch to troubled bike 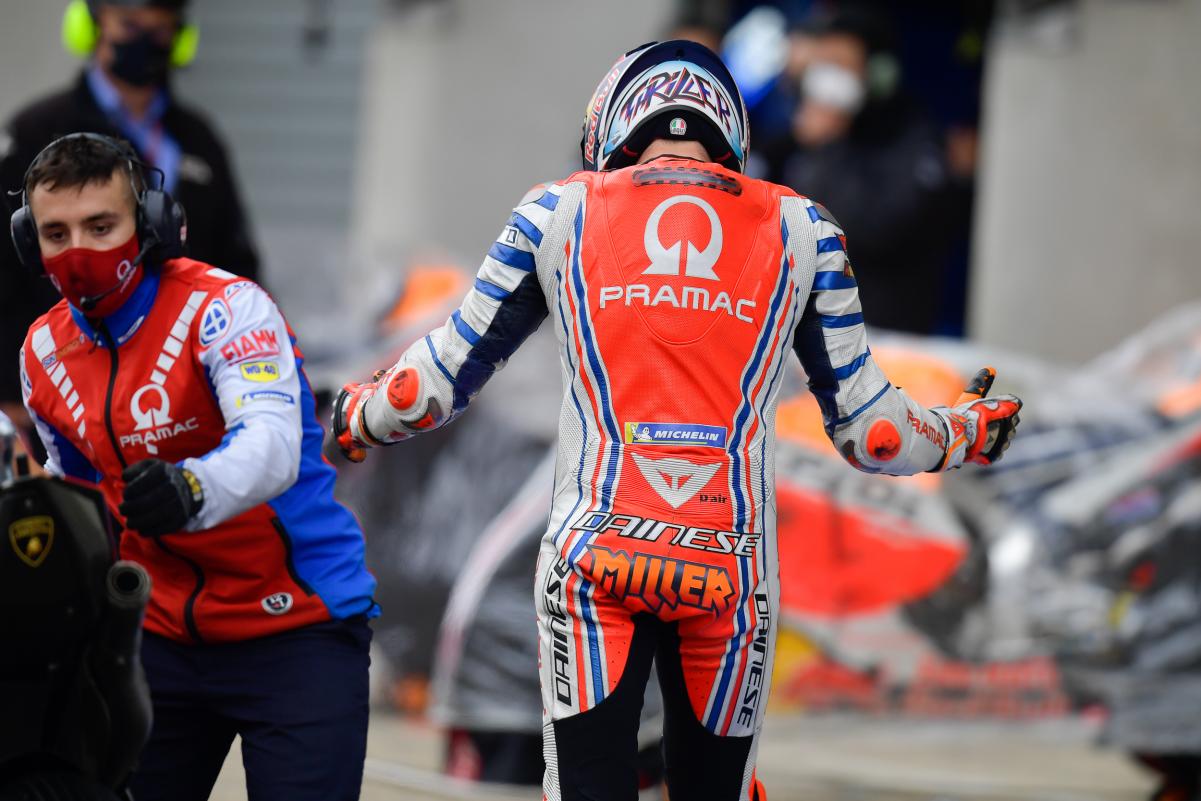 Danilo Petrucci got slightly emotional when his mum surprised him with a video call after French MotoGP race as Jack Miller reveals bike switch.

The weather conditions changed, perhaps, at the right time for Ducati’s Petrucci in French MotoGP race as the Italian took advantage of it to score his second career win, first since he was announced to join Tech 3 KTM for the 2021 season.

It was not easy for Petrucci as teammate Andrea Dovizioso and Pramac’s Miller had him in check along with Suzuki’s Alex Rins. While the Spaniard and the Australian dropped out but the Italian remained and was joined by Pol Espargaro and Alex Marquez then.

The main threat was from Marquez in the end but Petrucci hung on eventually. “It was a very, very crazy year because the season had not started but I lost my seat,” said Petrucci in press conference. “It felt like in that moment nobody trusts me.

“But there was some movement of other riders and other people trusted me. At the end, the season started and the changes to the rear tyre made me struggle a lot. I first started working on the electronics, but was not the way to do it and at the end in Misano test we found something, then in Barcelona I felt the bike again like I wanted.

“Then here I knew that I got a big opportunity. For sure I was really scared about Alex coming through in the last laps because I know he is a very good rider in the wet. Like me, he lost his factory seat before the season started. So, he is a world champion and he wants to prove he is very fast also in MotoGP.

“So, I think in the end it was who wants to win more and fortunately he started so far back and I start in the first row,” summed up Petrucci, who now feels good to fight for podium in remainder of the 2020 MotoGP season after finding the confidence in Barcelona.

While speaking to media, though, he was surprised by the team’s PR with a video call from his mum. It was a shock for him considering his mother doesn’t like to be in front as he got a bit emotional after speaking to her in a heartwarming moment.

While there was joy for Petrucci, it was literally agony for Miller, who was furious after yet another retirement. He did not do any media session post the MotoGP race but clarified what happened on his social media channel with a calmer mind.

The Australian revealed that the bike he rode in the race had engine issues in the Warm-Up session. It was the only one with the wet set-up and so when it started to rain, they were forced to use the troubled GP20 in the grand prix, which eventually gave away.

“One that got away,” wrote Miller. “We had an issue with the engine that sprung up in the warm-up, so we swapped to the second bike for the race. But then when it rained just before the start, we had to switch back to the original bike with the wet set-up, we didn’t have time to fix anything, so we just had to cross our fingers but the inevitable happened. Just one of those days… Onto Aragon, see what we can do there,” he summed up.