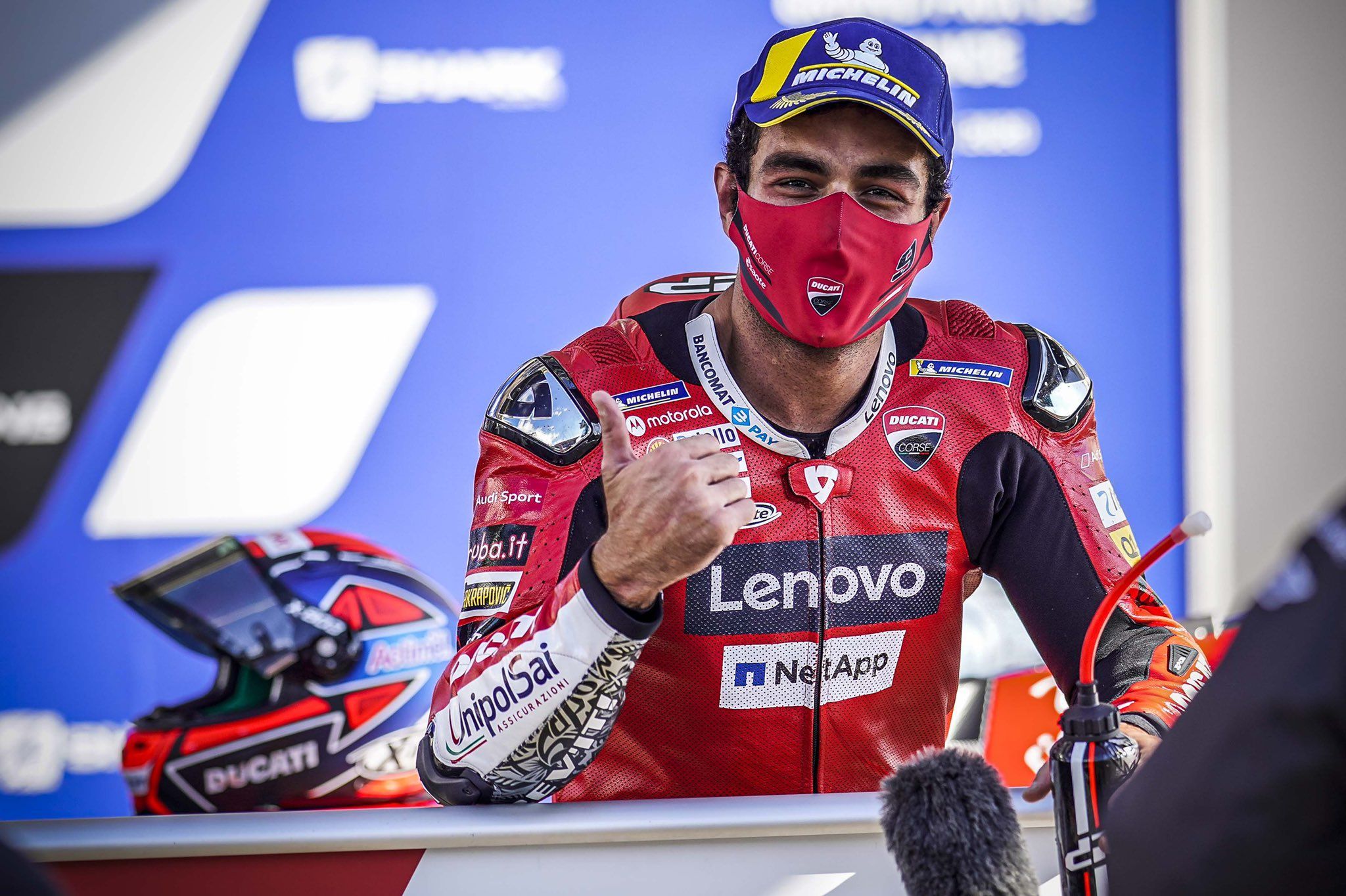 Just as they were getting ready to start the MotoGP French GP, it started to rain heavy at Le Mans which delayed the start of the grand prix. Everyone had to switch onto the wet weather tyres with the lap count truncated to 26 from the scheduled 27.

Suzuki’s Alex Rins did well to be seventh from Aprilia pair of Aleix Espargaro and Bradley Smith as Avintia Ducati’s Johann Zarco rounded out the Top 10. It was disaster for the Yamaha factory riders with a crash for Valentino Rossi in the first few corners.

The Italian lost momentum in the pack as Suzuki’s Joan Mir and Yamaha’s Maverick Vinales touched each other to evade Rossi, which dropped them to the back of the grid. Even Petronas SRT’s Franco Morbideli and Pramac’s Francesco Bagnaia dropped back.

At the front, Petrucci cleared Miller to take the lead of MotoGP French GP as Dovizioso slotted in second from the Australian. Rins moved to fourth from Espargaro with Crutchlow in sixth as Smith got the better of his teammate A Espargaro to be seventh.

Honda’s Alex Marquez was the gainer in this to be eighth with Tech 3 KTM’s Miguel Oliveira moving to ninth ahead of LCR Honda’s Takaaki Nakagami. MotoGP points leader Quartararo dropped to 11th with no pace in his Yamaha in the wet conditions.

The fight at the front intensified as Petrucci led Dovizioso and Miller. The trio had Rins chasing them with a quicker pace as Espargaro and Crutchlow stationed in fifth and sixth. Marquez, meanwhile, was up to seventh from Oliveira and Nakagami.

It was disaster for the Aprilia as Espargaro dropped to 13th after which Smith crashed out from a solid points position. It helped Quartararo to be 10th but only briefly as Zarco soon passed him, with Bagnaia also recovering to 12th and Vinales was in points in 15th.

As the conditions remained slippery, the fight in the front had six riders with Petrucci, Dovizioso, Miller, Rins, Espargaro and Marquez all in the game. The two Ducati riders exchanged places for the lead but Petrucci stayed in front eventually.

Petrucci and Dovizioso, though, touched which dropped the latter to fourth as Miller went off track to gain a place on Rins. He quickly gave the position to the Spaniard but retook it on the track. However, it was disaster for the Australian as he retired with a problem.

A lap later, Rins crashed from third but continued on, at the back of the field. It was Petrucci back in the lead from Dovizioso as Marquez passed Espargaro to be third, with Oliveira moving up to fifth from Nakagami, Zarco and Quartararo in the Top 8.

Honda’s Stefan Bradl, meanwhile, moved up to ninth with Vinales 10th ahead of Mir, Bagnaia, KTM’s Brad Binder, A Espargaro and Tech 3 KTM’s Iker Lecuona in the Top 15. There was double of black flag with orange disc shown to the MotoGP riders.

The first was for Morbideli, who crashed at Turn 4 but continued on. He had something on his bike hanging which forced him to retire. For Rins, he had a marshal rope attached to his bike, which he stopped to remove and continue with no issues.

It was getting interesting at the front as Petrucci led the way but Marquez passed Dovizioso to be second as the Italian’s rear tyre was gone which allowed Espargaro to pass through along with Oliveira, with Nakagami and Zarco closing in on the front group.

But it was not long as Petrucci came through eventually to win the French GP and register his second MotoGP victory of his career as Marquez came through to score his first podium in the premier class with Espargaro completing the Top 3.

Dovizioso was fourth as he managed to stay ahead of Oliveira, who lost to Zarco on the final lap to be sixth after the Frenchman cleared Nakagami just a lap before. Bradl in eighth registered the best result for Honda in the 2020 MotoGP season.

Behind him, it was a battle for ninth as Quartararo managed to keep it eventually from Vinales and Mir as Binder was 12th, Bagnaia 13th, Espargaro 14th and Lecuona 15th – the only finishers as Rins dived into the pits on the final lap of the race.