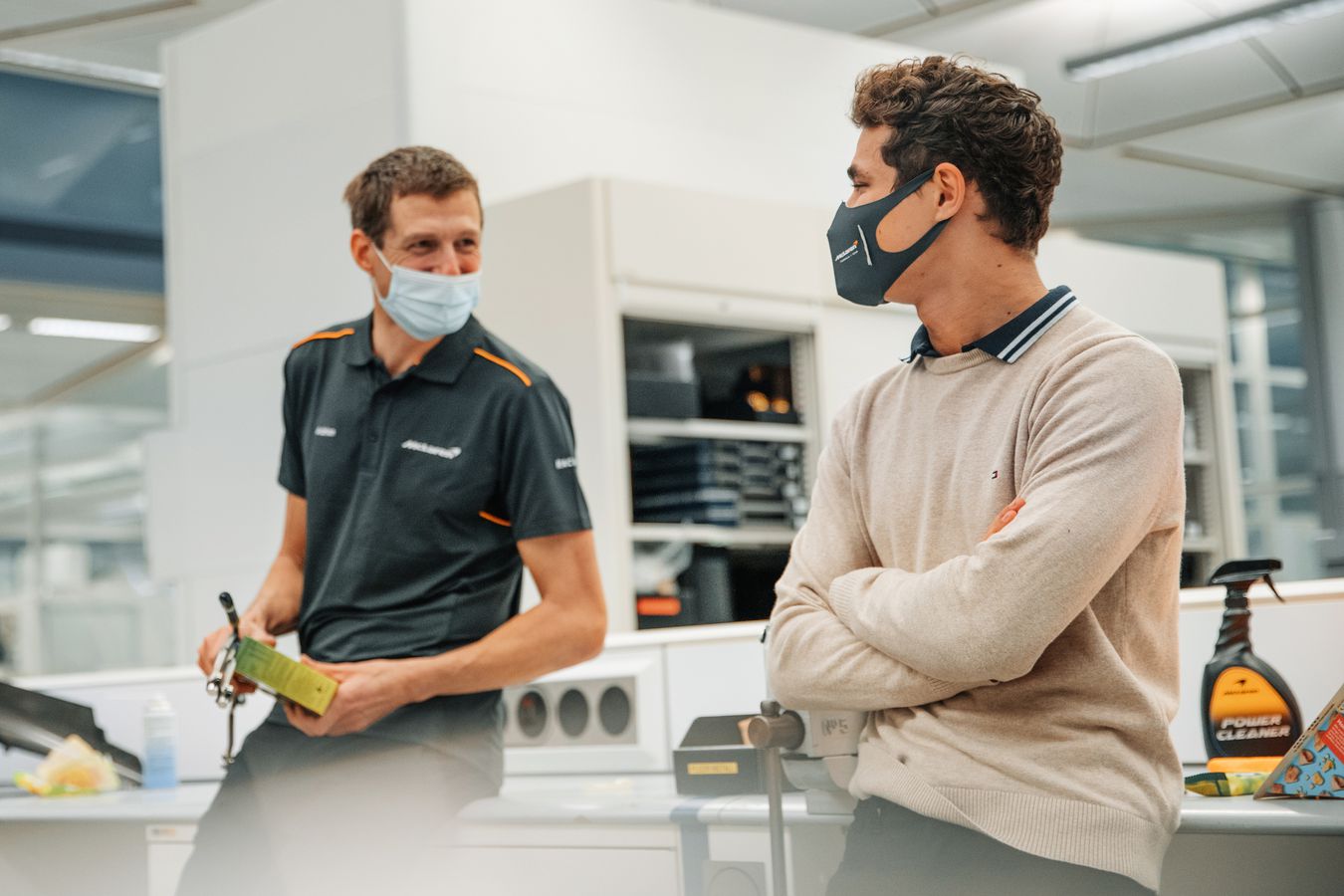 Before the 2021 F1 season, McLaren’s Lando Norris writes on the things of 2021 he most looks forward to, from working with the team to introducing new lids and seeing how new teammate Daniel Ricciardo approaches racing.

Norris writes in the team’s new blogpost that he most looks forward to working with the team once more. After spending holiday in Dubai, the Brit returned to the factory earlier in the month as they prepare for the new season, due to begin in late March.

Norris says he looks forward to things such as stripping down the car after race weekends, and ‘helping the team wherever [he] can’. The British F1 racer is considered a driver more engaged with his team than some others.

“The thing I’m most excited about is working with everyone in the team, whether that’s at the track, the McLaren Technology Centre or remotely,” Norris wrote. “From stripping down the car at race weekends to putting in the miles in the simulator, I’m looking forward to getting stuck in and helping the team wherever I can.”

Next season, Norris will be driving alongside Daniel Ricciardo, who is new to the team after the conclusion of his tenure at Renault. The Australian is among the biggest characters in the paddock, his fun-loving personality seemingly compatible with that of Norris.

But Norris says his intent is not to have fun with Ricciardo, as he instead aims to learn from the seven-time F1 race winner and grow to understand his approach. “I’d say [I most look forward to] teaming up with Daniel,” he started.

“Not because he’s good fun to be around, but because I like to work out the approach of my team-mates. Daniel has a lot of experience: he’s raced with big teams, scored plenty of podiums and knows how to win grands prix.

“I’m curious to see how he drives a car and what his approach is,” writes Norris, who will be driving McLaren’s MCL35M in the coming season. The 21-year-old says he “can’t wait” to return to the cockpit after the last race of 2020 in December.

“Unsurprisingly, I’m very eager to get back behind the wheel of an F1 car, I’ve driven the MCL35M in the simulator, but I can’t give you any clues about what it’s like to drive,” Norris teased. It feels like ages since the last race in Abu Dhabi.

“I can’t wait to go racing again and push one of the fastest cars on the planet to the limit,” he says, adding that he also eagerly awaits what he describes as ‘the unknown’. He considers the unknown part of F1’s appeal.

“In general, I’m excited by the new challenges that come with each season – no two seasons are the same. I love the feeling of going into the unknown. That’s part of what makes F1 so special. You don’t know what’s going to happen in each race.

“Anything is possible and it’s all about embracing what the season brings: new people, new relationships, new drivers to compete against, new cars and [more],” Norris said. The McLaren driver, also known for his creative helmet designs, says he is excited to introduce his new lids in the coming season.

“I love the creative side of what I do: designing new helmets and working with different designers. While I’m not going to be doing quite as much this year, there’s a plan in place to do a handful of special, one-off helmet designs. We’re working on them at the moment, so watch this space!” Norris concluded, also saying that he is excited to return to traditional tracks, and tackle the new circuits of 2021 like Zandvoort.