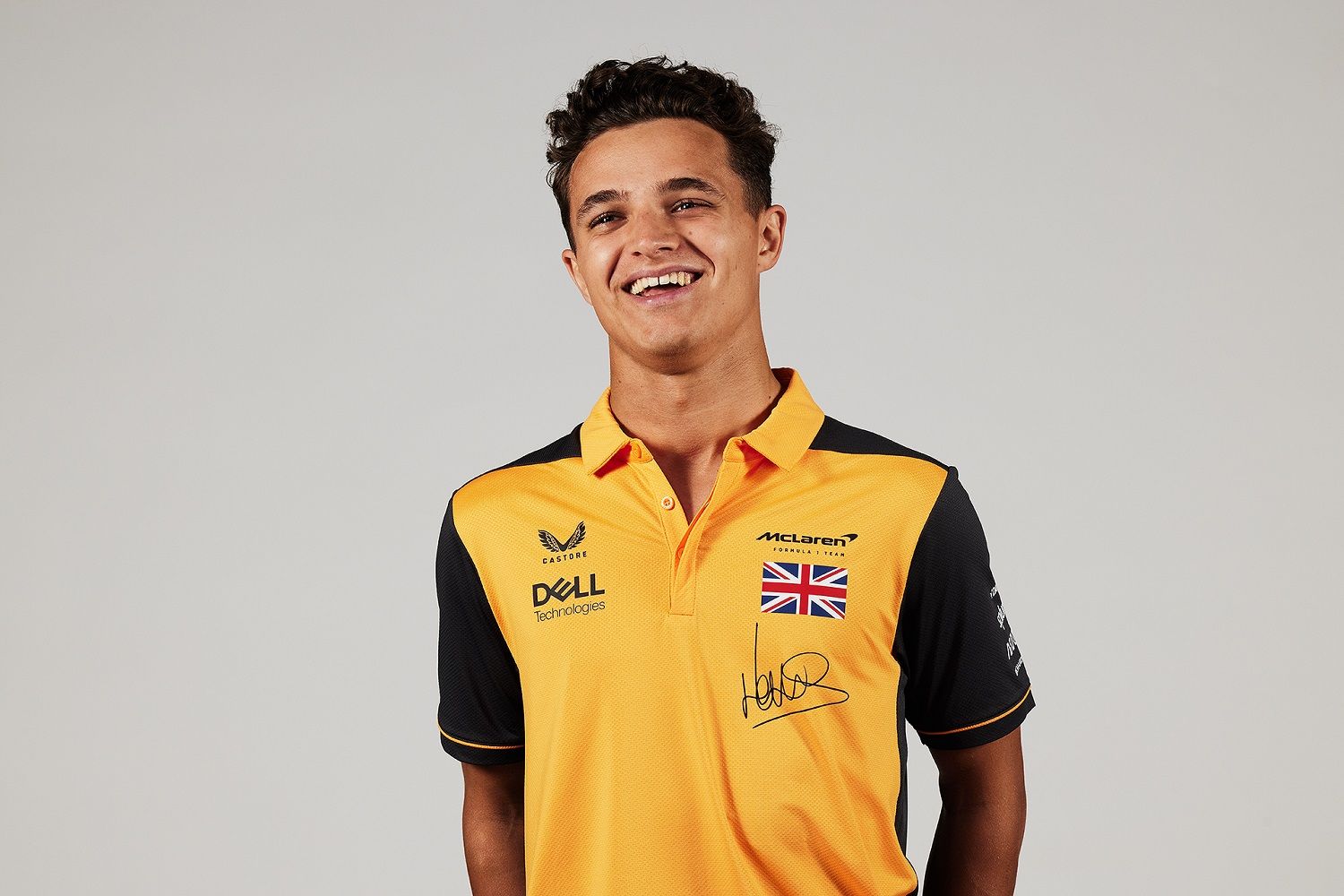 Lando Norris has opened up on his new deal with McLaren which will see him stay with them until 2025 F1 season, as Andreas Seidl adds his view.

The morning of Wednesday saw McLaren announce a contract extension of Norris which will see him stay with the Woking-based outfit for until the 2025 season. It will be seven seasons for the Brit as a F1 racer and nine years being part of the family.

In a chat with written media, Norris reasoned the need for this deal, giving a ‘strong message’ of the faith and belief at McLaren. The message is also to potential teams who wished to hire him, as the Brit revealed of few chats which didn’t get too serious.

Even with the unknowns of how McLaren will perform in this era, Norris is pinning hope on the team’s road map to the top. The upcoming wind-tunnel project is one of the biggest catch for him to stay on until 2025 in a tight ‘contract’ as per boss Seidl.

Here’s what Norris said regarding the deal –

Norris: “I’m extremely happy, it’s a big part of my career and life ticked off, and to stay in Formula 1 for another four years is pretty amazing from my side. I’m super happy to do it with McLaren as well, the people I’ve grown up with, the people I’ve come into Formula 1 with. More than anything I would love to continue what we have and continue trying to reach that dream of ours, which is to get back to winning races and of course to get back to winning championships and so on. We have to start from below, first with race wins and so on, so extremely happy.

“Of course big thanks to Andreas,  Zak, all of the McLaren and big bosses as well, for having the faith in me and it shows the faith I have in McLaren, what I think and will they be able to achieve in the next few years, with having the wind tunnel and so on, we are going to be quick and there still things that we need to improve on and make better before we guarantee that we have the ability to challenge and chance to fight for race wins and championships but I know that’s coming up and I know that’s in the pipeline for us in the future.”

Last year signed one and another so soon –

Norris: “It did feel a bit weird that I only did one last year, but that was at the beginning and that was for that season as well, so it wouldn’t have brought be anywhere near to 2025. This is more for the solidarity of me and the team, and just to really put the confidence in both of us for the long-term. Because I see that as a benefit – one for myself, to have this longer contract and stay here for a while, and one for the team as I do see it as a performance benefit and motivation benefit for the mechanics, for the engineers and everyone in MTC.

“If I want to find every bit of performance, then that is included in something like this. It’s not just purely in the race car, there’s other areas as well and this is definitely one of them. It was another opportunity for me to confirm my commitment to the team and for them to confirm it with me and give the whole team the confidence that I’m here to stay and want to keep trying to achieve things with them. I think that’s a great thing for the team and that’s why for my own belief I wanted to do it, because I believe it’s a big motivator for them. So, I did do it not so long ago but those are the reasons for this one.”

Norris: “It is something that I after last year and coming into the future, things we are always talking about, Of course, every single day I go to Andreas saying I want a better contract! But it’s just something that comes and goes and we talk about – if other things sort of come up and whatever then it’s something we’ll speak about. This is something that comes and goes, when you talk, there’s other things that come up and whatever. Sometimes it’ll be me kind of bringing it up to Andreas, sometimes it will be Zak or Andreas bringing it up to me, so it comes from both sides.”

Norris: “There was little chats here and there, but that’s all, nothing went far. As soon as something came up, that’s when I would then continue to go to Andreas and have a little conversation about what our future holds and so on. There was little things, no point lying about it, those little things here and there with various other teams. But nothing went far at all. Which teams? That’s something I can’t say, you probably be able to guess reasonably well but yeah that’s all.”

Factored the risks, other teams –

“The good thing about this is that I know those opportunities, or I’m confident those opportunities would arise in the next few years, but the fact is I’ve still chosen to commit to McLaren. So, I think that is quite a strong message, that this is still where I want to be, this is where I want to achieve race wins and podiums and championships with. It just shows a strong message and I did weigh all the factors for my own benefit and what I think could have come up in the next few years with drivers leaving and so on. But in the end, McLaren for me was still the best option. So that’s why I’m most happy to be here and commit to my team.”

Norris: “Yes, I would say so, I think there were opportunities – as I said before – that would be coming up in future with various teams and this is putting a very strong message that I am putting out across to everyone, the faith we have in each other, and how strongly I believe that McLaren can recover still and get back to the front in the next few years, even with the opportunities that could arise in one or two or three years time. I think that’s quite a strong message that this is where I want to be and where I want to achieve race wins, podiums and championships.”

Here’s the side from Seidl on various topics –

Seidl: “With the announcement last year, pretty much the extension of an existing contract which would have brought us only to two more years with Lando Norris and if you look at the overall plan we have in place here, the journey we are on, we know that despite the good steps that we made in previous years, we have big next steps to make. We also know that after all of our organisational changes we did here at McLaren, the cultural changes, that’s the plan we have in place on the infrastructure side, we simply need more time in order to keep growing as a team and to finish this infrastructure projects and actually benefit from them.

“In order to achieve these ambitious targets we are having, to get back to the position where we fight for race wins every weekend, having Lando with us and having this consistency and continuity in the driver line-up will be an absolute key to achieve these targets or these objectives. Therefore it was very important to lock in Lando with us in the end of 2025.”

First to open the chat –

Seidl: “The beauty of this sport is that we spend so much time together so there’s a permanent dialogue ongoing between us and Lando Norris. We obviously have a lot of conversations about where we are as a team, about the plans we have in place and during one of these discussions it was also clear that there was an interest from our side but also from Lando’s side in order to commit for the long term. They are conversations that are obviously consistently happening and making steps. In the end, we came to this common view that putting a new four years contract in place is the deal to make in order to have the best shot in order to achieve these common goals.”

Any other team asked for him –

Seidl: “We just focus on our own journey, for us it was important to lock-in Lando Norris for the next four years and that’s what we were focusing on and I am not aware of any team speaking to me with regards to Lando.”

Seidl: “First of all, if you go by McLaren having a #1 driver, it is definitely not. My job together with the team is to make sure we provide both drivers equal opportunities to do well on the track and then battle it out on track, but of course with Lando now being with the team since 2017, putting it fourth racing season with us, showing last year that with a right team and the right car, in his third year in Formula 1, he can score pole positions and can fight for race wins.

“It was natural for us that we obviously try to lock him in as long as possible here at McLaren because as I said before, the most important thing is that we are fully aligned with the timelines in terms of the journey we are in. Therefore we are very happy to have Lando with us for four more years as a driver which is the most important thing obviously whom we know can pull it off when it matters but at the same time as we have seen in the last three years, Lando is also a great ambassador for McLaren outside of the car which is very important as well as a team and therefore we couldn’t be happier to have him in the car.”