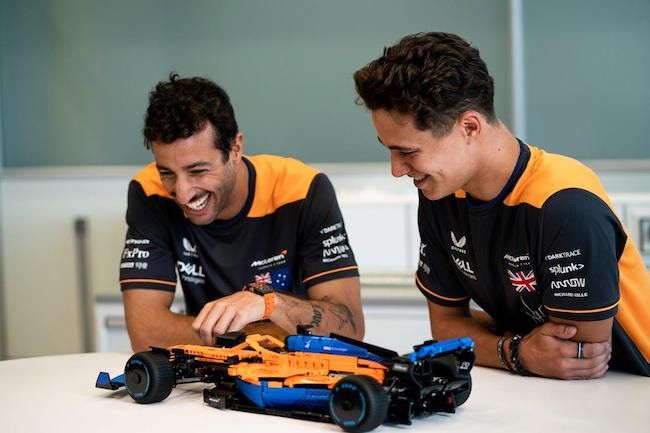 McLaren Racing have unveiled a joint venture between the LEGO Group and the team, with the first ‘LEGO Technic’ McLaren Formula 1 car.

Daniel Ricciardo and Lando Norris heralded the realism of the car in a reveal video on social media, and noted how far LEGO sets have advanced over time. The model’s livery is based off of the 2021 car, featuring the distinctive papaya and blue design which many speculate will be heavily revised for the upcoming 2022 season.

However the model is actually an “interpretation” of the 2022 cars, which can be clearly seen in areas such as the front wing endplates and rear wing. With support from the McLaren team, LEGO have included in the 1432 piece model a V6 cylinder engine with moving pistons, steering controlled from the cockpit, working suspension and a differential lock.

The release further adds: “The building experience is designed to reflect the shared McLaren and LEGO Group values of pioneering design and cutting-edge technology, while enabling fans to explore their passion for the sport.”

McLaren’s Technical Director James Key notes how the fans were at the forefront of the design process. “We are excited to unveil the unique LEGO Technic model of our McLaren F1 car, a fun and engaging product that celebrates our 2021 season livery while giving fans a hands-on interpretation of the new 2022 F1 car design,” he said.

“This has been made possible by an agile collaboration with the LEGO Group team, who have truly embraced the spirit of our brave and bold approach to design. The final product looks fantastic, and we cannot wait to make this available to our fans.”

At the same time, LEGO Technic’s Head of Product, Neils Henrik Horsted, added: “The partnership between the LEGO Group and McLaren continuously develops each time we get together for the next collaboration.

“The way in which we are able to inspire our fans through the technology and designs produced pushes the limits of possibility, both on the racetrack and whilst building with LEGO bricks. This unique product is a true testament to the importance of the play experience for our fans.”

It will be on sale globally from 1 March 2022, just over two weeks after the real 2022 car is officially launched at the McLaren Technology Center. Here’s a small video from the team:

Meanwhile over at Ferrari, the Scuderia have announced the signing of their latest Premium Partner in Qualcomm (under the Snapdragon name). The agreement with the Qualcomm Technologies division will have a “strong technological impact” to the Formula 1 team and Ferrari’s road car manufacturing process.

Nevertheless the logo that will be visible on the 2022 F1-75, which will be officially unveiled on 17 February, will be that of Snapdragon. “We believe innovation requires market leaders working together,” stated Ferrari CEO Benedetto Vigna.

“Thanks to this agreement with Qualcomm Technologies, we expand our knowledge in digital technologies and web 3.0, areas with great potential for automotive and motorsport. We believe valuable partnerships, and a distinctive Ferrari interpretation, ultimately enhance product excellence.”