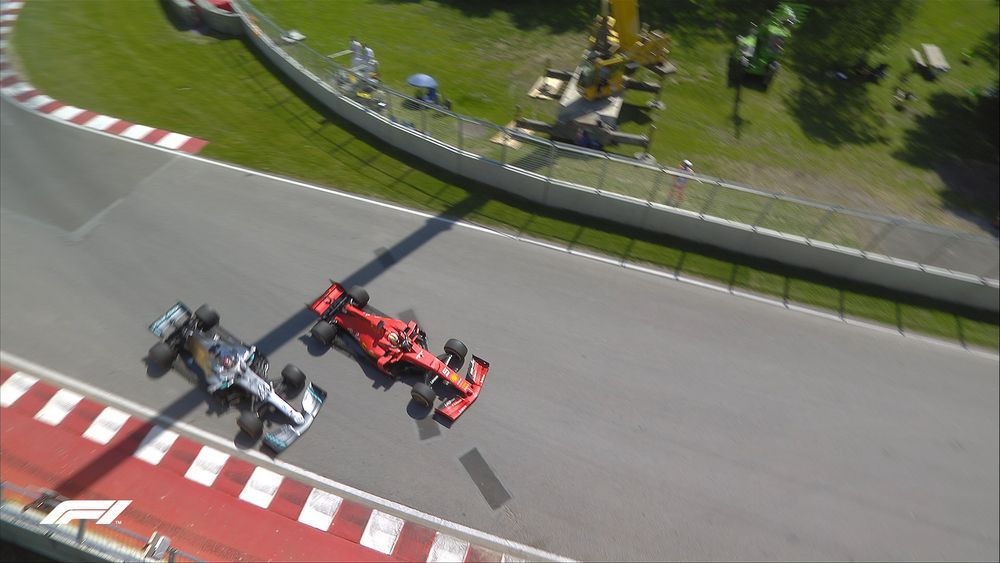 The controversial decision by the F1 Canadian GP stewards against Ferrari’s Sebastian Vettel for his incident with Mercedes’ Lewis Hamilton has brought in reactions from many within the motor racing community.

Vettel started off the F1 Canadian GP in style as he led from pole from Hamilton and held on to his lead even after the lone pit stop. It was close afterwards though as Hamilton caught the back of Vettel but the German hung on still.

The only place where Hamilton could have gained on Vettel was Turn 1, Turn 2 and Turn 8 which the British racer did but the Ferrari driver was still keeping his nose ahead. It came down crashing though eventually when Vettel slid onto the grass at Turn 2-3.

He lost the rear and went onto the grass with Hamilton still some way behind. He re-joined immediately in the tight corner with Hamilton almost side-by-side. He was put under investigation which resulted in a five second penalty and drama ensued.

While the rule is clear about re-joining but the FIA has always talked about taking incidents separately and penalising as per the crime committed at that moment. Looking at the corner and Vettel’s speed, the German had nowhere to go actually.

It was either Vettel to stop or crash into Hamilton or for Hamilton to back-off which he eventually did. The German couldn’t stop as much since the speed was already too much and by the time he managed to control, Hamilton was there already.

All in all, it looked likely a racing incident which Hamilton and Mercedes somewhat thought the case to be but everyone was shocked which sparked off the social media. Ferrari, though, has intended to appeal the decision. Meanwhile, here’s some of the opinions:

That’s ridiculous 5 seconds penalty,Seb did well not to hit the https://t.co/f2onSfj4Bl GRIP ON GRASS !
No room on track there.Great driving from Lewis.

He followed it up with: “What’s Seb supposed to do? Crazy, the car stepped out at that point he was a passenger. Very very embarrassing. No joy in watching this race, two champions driving brilliantly, will end in a false result.”

I think the function of the stewards is to penalize flagrantly unsafe moves not honest mistakes as result of hard racing. What happened at #CanadaGp is not acceptable at this level of our great sport. @F1

my observation on Vettel rejoining: his helmet moved to look into mirror only after steering correction! that he slid that far is laws of physics. No space for Lewis is name of game with street tracks. What happened to #LetThemRace ? Was it sketchy? yes! a penalty? not in my view

Thanks for all your votes. My personal view is that he could have left more room, but we lost a great final few laps because of the penalty. There was enough doubt to let them carry on. Remember Dijon! #f1 #Dijon

The podium cermony showed how no one was happy to be up there, as a result of this stupid penalty. It ruined a great race for all us fans… Kudos to Vettel for not having it, and to Hamilton for being a great sportsman. #anticlimax #F1

Tough result for F1.
I can see it both ways.
FIA are following the rule book that you can’t rejoin by going straight to the racing line but poor choice for the sport.
All drivers know Vettel could have not gone back to power and joined safely on the inside.#F1

"For me, it's a racing incident. You can’t just stop the car and stay off the circuit."@JensonButton has his say on the Sebastian Vettel penalty which denied him a #CanadianGP victory

Wouldn’t go to the podium if I was Vettel. Honestly.

Fully agree. Plus it is not the same to recover from a “grass run-off” than from a modern asphalt run-off where you have full control of the car. #racingincident #LetThemRace https://t.co/OcBMNs8H2Z

[Autobild] Helmut Marko about the Vettel penalty: "Where was Seb supposed to go? He did nothing wrong. Lewis can be happy that he didn't slide into his car."#CanadianGP

I’m glad we don’t have stewards in @nascar. #BS https://t.co/7IufOUi2vC

Allan McNish stated: “Not really sure what VET could have done differently when rejoining….with the momentum he had he was always going to end up where he did….tough decision for VET.”

For those asking… This is the official document from the FIA. #CanadianGP pic.twitter.com/rwQI6Licnt

[Note: More will be added as they come]