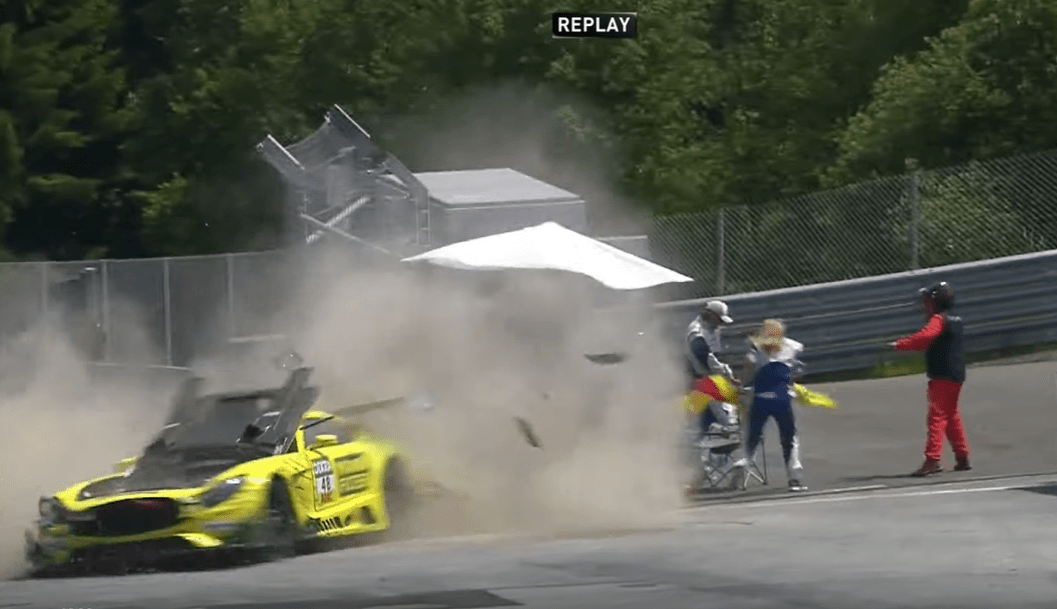 Mann-Filter HTP Motorsport’s Fabian Vettel along with the marshals escaped any injury after a big crash in Race 2 of ADAC GT Masters weekend at Red Bull Ring circuit.

In Round 3 of the 2019 ADAC GT Masters season at Austria’s Red Bull Ring circuit in Spielberg, Vettel abode the #48 Mann-Filter HTP Motorsport’s Mercedes-AMG GT3 car, crashed out at the Remus (Turn 2) hairpin when the bonnet of his car came lose.

While battling for 10th on the final lap of Race 2 with #21 Team Zakspeed BKK Mobil Oil Racing’s Lucas Auer – also driving a Mercedes-AMG GT3 car – the bonnet struck open, blinding his view as he slid across the gravel and hit the barrier near to the marshal post.

The marshals already started to move away when they saw the car coming towards them, which fortunately saved them from any major injury. Vettel was taken to the medical center as he certainly seemed to have taken a big hit when he moved out of the car.

He was released soon after precautionary checks, with the official word being that ‘he is shaken but fine’. The incident comes after the bonnet looked to be lose for several laps in the race but the stewards issued no warning to the team or the driver.

The younger brother of F1 champion Sebastian Vettel is only in his first full season of ADAC GT Masters, where he races alongside Philip Ellis. In the three rounds so far, the pair of Vettel and Ellis have scored 14 points to be 19th in the drivers’ championship.

Their best result is a seventh place finish in Round 2’s Race 2 at Autodrom Most in Czech Republic. In the Junior Cup though, Vettel sits well in sixth with 78 points. The incident can be seen on the video, from 1hr13m mark onward: