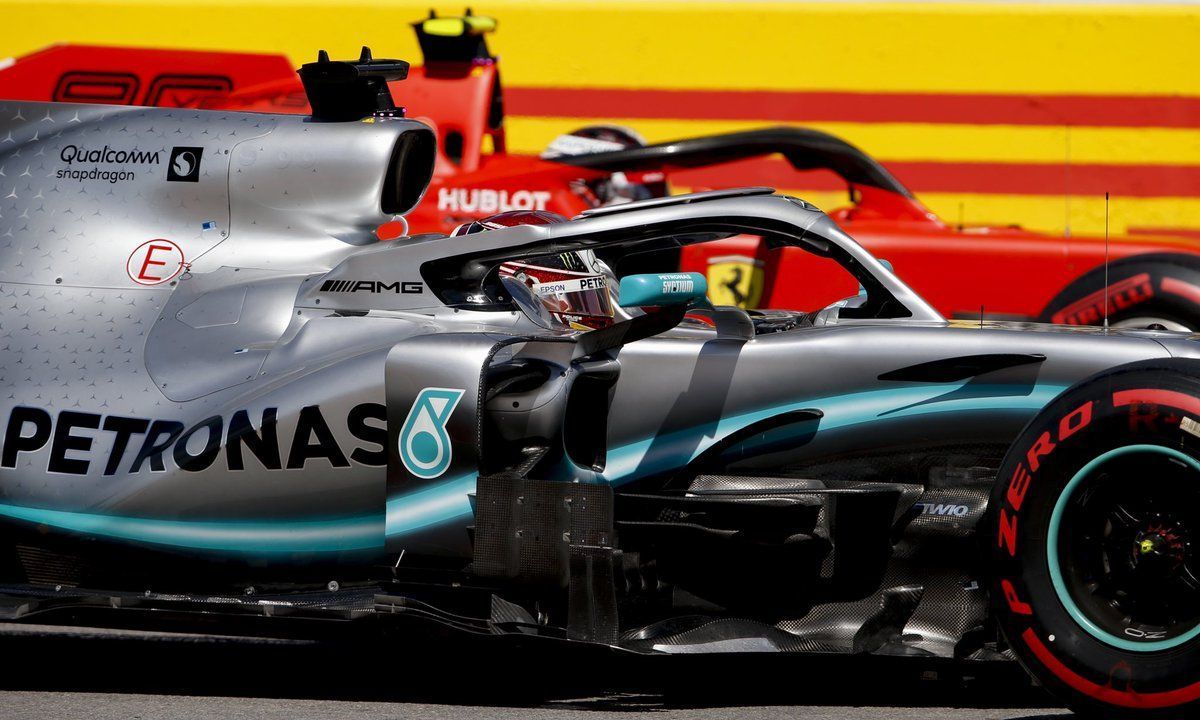 Mercedes’ Lewis Hamilton lucked into a win in F1 Canadian GP after a penalty to Ferrari’s Sebastian Vettel dropped him to second ahead of Charles Leclerc.

There was some cause of concern at Mercedes with Lewis Hamilton’s car before the F1 Canadian GP race start at Montreal with a hydraulics leak but the team managed to fix it up without breaking any rules and he started from the front-row.

However, there was a slight scare on the formation lap as Hamilton was a bit slow to get away but it was all OK from Mercedes side. His start was good though despite getting bit of a run-in from Ferrari’s Charles Leclerc but managed to keep second.

At the front, pole-sitter and Ferrari’s Sebastian Vettel got away well to keep the lead as there were some incidents at the back. Toro Rosso’s Alexander Albon was sandwiched between Racing Point’s Sergio Perez and Alfa Romeo Racing’s Antonio Giovinazzi.

Albon’s wing came off and went straight into the cockpit of Haas’ Romaon Grosjean, who had a slow start. It stuck in front of his Halo as he had to remove it manually when he ran off at Turn 1 and dropped back with Albon needing a pit stop.

There was an early stop for McLaren’s Carlos Sainz as well with the Spaniard coming in on Lap 4 to switch to the hard compound. His teammate Lando Norris was having a back and forth with Red Bull Racing’s Max Verstappen, who started on the hard compound.

It didn’t last long as Norris’ right rear suspension melted due to hot brakes and he was forced to retire from the Canadian GP. At the front though, Vettel led the way from Hamilton and Leclerc but Mercedes’ Valtteri Bottas stuck behind Renault’s Nico Hulkenberg.

Hulkenberg overtook him at the start which put Bottas under pressure as Verstappen got quickly on his tail soon after his early fight with Norris. Hulkenberg’s teammate Daniel Ricciardo hung on to a Top 5 position but Red Bull’s Pierre Gasly lost out.

The Frenchman pitted early for the hard compound but he got stuck behind Racing Point’s Lance Stroll, who made a solid start and found himself inside the Top 10. The strategy cost him track position to Hulkenberg and Verstappen as well.

The leaders pitted between Lap 26 and Lap 30 with Vettel the first one on the road as he kept the lead but for once Mercedes were forced to hold Hamilton back by two laps as they did not find him a gap in the traffic which meant he pitted on Lap 28.

Ferrari opted to keep Leclerc out longer as he pitted on Lap 33. It got tasty in the middle with Vettel defending hard from Hamilton as the British racer got on to his tail and nearly got him when the German ran off at Turn 3 but stayed ahead.

Hamilton complained of an unsafe re-entry which was put under investigation. It looked like a racing incident but the stewards handed Vettel a five second penalty for an unsafe re-joining, which eventually handed the race to Hamilton.

While Vettel was fuming inside the car, Hamilton stayed on his tail with Leclerc then gaining on them, while Bottas was fourth ahead of Verstappen, who managed to pass both the Renault drivers with Ricciardo in sixth ahead of Hulkenberg.

It ended as it was looking like to be with Vettel crossing the line first but Hamilton eventually won the Canadian GP to register his fifth F1 win of the 2019 season and extend his points lead, as Leclerc ended up third to make it a double Ferrari podium.

It was drama after the race though with Vettel stopping at parc ferme and going off into the motorhome instead of talking to Martin Brundle or parking his car under the podium. He eventually made his way into the podium room to have a chat with Hamilton.

Before that he exchanged the #1 and #2 placard under the podium. Bottas was fourth with Verstappen making up places to be fifth ahead of the two Renault drivers with Ricciardo in sixth ahead of Hulkenberg to secure a solid result for French manufacturer.

Alfa Romeo Racing had no points to show again with Antonio Giovinazzi in 13th, as was the case with Haas with Romain Grosjean in 14th. Giovinazzi’s teammate Kimi Raikkonen went for a double stop in the end but only managed 15th still.

Williams’ George Russell did well in 16th as he managed to beat the Haas of Kevin Magnussen, who had a dreadful race after starting from the pitlane with a new chassis. He complained on the radio but was shunned down by Guenther Steiner.

At the back was Williams’ Robert Kubica as the last finisher after Toro Rosso opted for a strategic retirement with Albon. Everyone from Ricciardo until Raikkonen finished a lap down with Russell, Magnussen and Kubica, ending up two laps down.