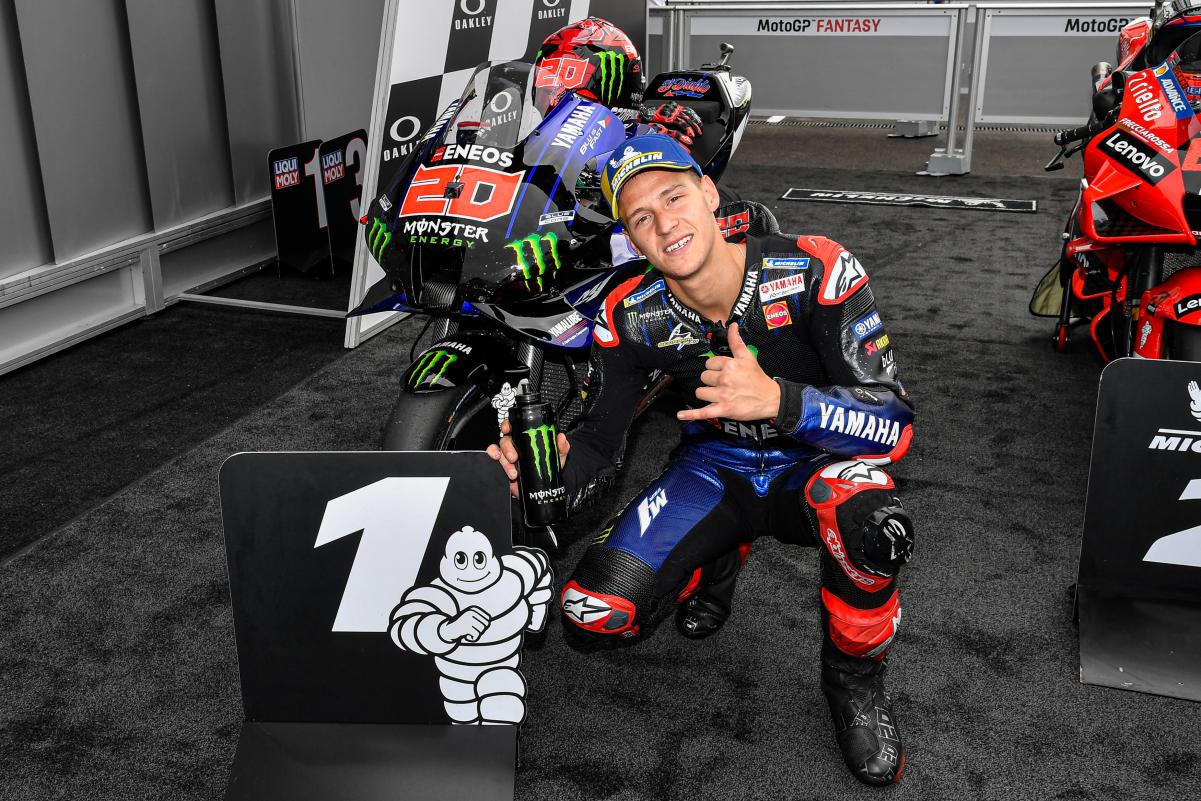 Yamaha’s Fabio Quartararo eased in to win MotoGP Italian GP from KTM’s Miguel Oliveira and Suzuki’s Joan Mir despite penalty to both.

Amid the news of Moto3’s Jason Dupasquier, the MotoGP riders got together for the Italian GP at Mugello, fighting with their emotions. It wasn’t a clean start, though, as Avintia Ducati’s Enea Bastianini crashed on the main straight after warm-up lap.

A replay showed Bastianini hitting the back of Pramac Ducati’s Johann Zarco, after the latter braked on the main straight line. The incident was put under investigation, with the FIM stewards to look at it after the end of the Italian GP.

The race, meanwhile, kicked-off, with pole-sitter Fabio Quartararo trying his all – abode the Yamaha – to fend off Ducati’s Francesco Bagnaia in the lead-up to Turn 1. The Italian managed to clear him for the lead, as KTM’s Miguel Oliveira was third.

But he was soon cleared by Zarco, with Ducati’s Jack Miller in fifth from Suzuki’s Joan Mir, whereas teammate Alex Rins was eighth behind KTM’s Brad Binder. Aprilia’s Aleix Espargaro was ninth from Honda’s Marc Marquez in the Top 10.

The Spaniard didn’t last long in the Italian GP after a crash on Lap 2, where he tried a move around the outside in the right-hander on Binder, but they touched and Marquez went down. This also caught out Petronas SRT Yamaha’s Franco Morbidelli.

The Italian had to avoid the bike of Honda and went through the gravel to drop to the back of the field. Moments later, Italian GP leader Bagnaia crashed out at Turn 9, after his small brush with the kerb, handing Quartararo the lead.

The Frenchman lost it to Zarco, but retook it and bridged enough gap between him and his countryman. Oliveira steadied himself in third but Miller dropped back after being eaten up by the Suzuki duo Mir and Rins – where the latter lost to the former in the passing game.

Miller not only fell behind Binder, but lost out to Espargaro, at one stage. The Australian, though, recovered a place to be seventh from the Aprilia rider, as the Top 10 was rounded out by LCR Honda’s Takaaki Nakagami and Pramac’s Michele Pirro.

The Italian had Yamaha’s Maverick Vinales on his tail, as the duo went back and forth for 10th, while Tech 3 KTM pair of Danilo Petrucci and Iker Lecuona ran 12th and 13th, after clearing Honda’s Pol Espargaro, with Petronas SRT’s Valentino Rossi in 15th.

At the front, Quartararo had enough gap to lead comfortably, but Zarco was cleared by Oliveira after the Portuguese rider piled on the pressure on him. It was not long for the Frenchman to be taken up by, not only Mir but also Rins, to drop to fifth.

There was some relief for Zarco after a fourth straight crash for Rins. The Spaniard had another DNF against him name, which helped Binder to be fifth from Miller and Espargaro. There was more drama behind him with a crash for Nakagami.

An off for Pirro, dropped him in the order too, with Vinales climbing up to eighth from Petrucci, Lecuona, Rossi, P Esparagro, Pirro, LCR Honda’s Alex Marquez and Aprilia’s Lorenzo Savadori in the Top 15 with just few laps remaining.

At the front, though, Quartararo eased in to win another MotoGP race in Italian GP, as Oliveira just held onto second from Mir, but a post race track limits penalty dropped him to third, promoting the reigning champion to a solid second.

However, same track limits penalty to Mir, demoted him back to third with Oliveira retaking second. Zarco held onto fourth from Binder and Miller, with A Espargaro seventh from Vinales and Petrucci, as Rossi cleared Lecuona on the final lap to 10th.

Lecuona had to be content with 11th, with P Espargaro 12th from Pirro, Marquez and Savadori in the points position, while Morbidelli and Avintia’s Luca Marini rounded out the 17 runners in the MotoGP Italian GP.

Here’s news on the death of Jason Dupasquier