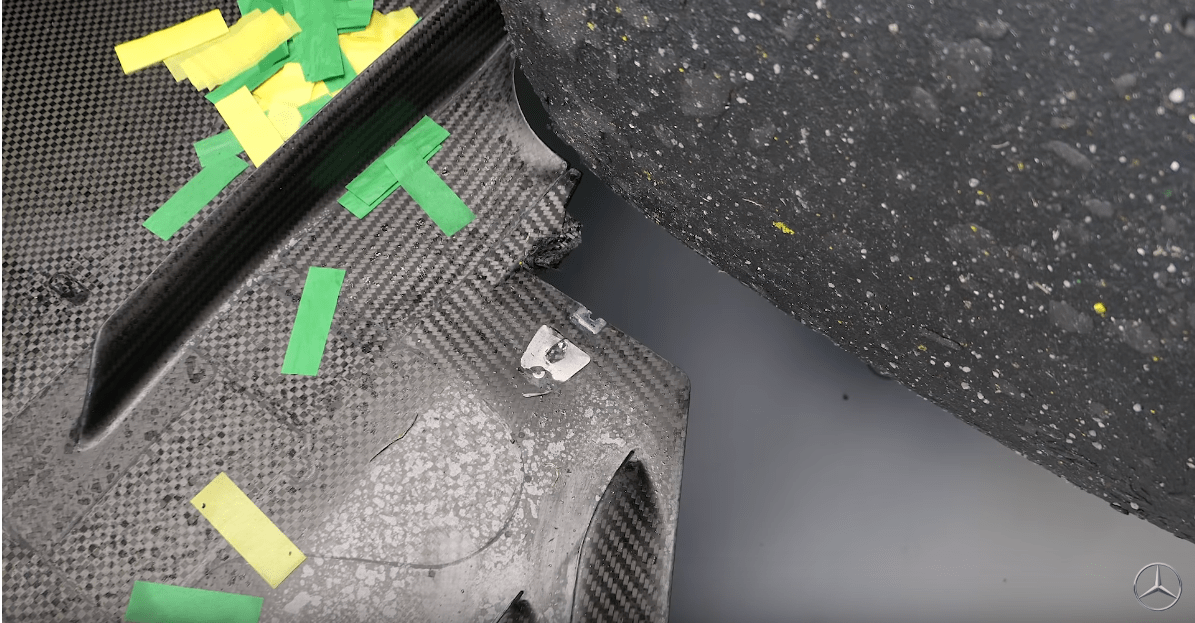 Mercedes suspects kerbs may have damaged Lewis Hamilton’s floor in the F1 Australian GP which limited his performance in the grand prix.

Following a big defeat for Hamilton at the hands of his teammate Valtteri Bottas in Australian GP, news of a floor damaged started doing rounds with Mercedes eventually confirming that the British driver indeed suffered a damage which limited his performance.

Having got some time to investigate the floor now, Mercedes suspects the damage to the floor just infront of the rear left tyre may have been caused due to kerbs. The small carbon piece would have detached itself when Hamilton went over a kerb.

“On inspection of Lewis’ car after the race, we noticed some damage on what we call the tyre seal area,” revealed Mercedes’ chief strategist James Vowles. “We saw the broken carbon just in front of that rear tyre on that floor region.

“That area is quite sensitive aerodynamically, both for downforce and also for balance of the car, and we believe we sustained it during the race while riding over some kerbs. Lewis already had a very long stint on that medium tyre after covering off the threat from Vettel’s undercut.

“So he was already having to manage those tyres quite significantly, hindering his progress through the race. Furthermore, that floor damage wouldn’t have helped. It would have caused the rear to be more unstable that it normally would be, and he did a fantastic job bringing that car to the end of the race.”

Before talking about the floor, Vowles also explained why Mercedes pitted Hamilton so early where the undercut threat from Vettel was so much that the German would have overtaken the British driver, had they not responded to it.

Vowles said they have a ‘Race Planner’ sheet at hand where they try to gauge when a driver would pit and where they can slot their own driver in the traffic if they are to pit at anytime of the race when the pit window opens up.

“When we look at Vettel’s race, he had Verstappen right behind him which was around 1.6s gap in all of that first stint and I am sure they were looking to potentially cover any chance of undercut from Verstappen,” he started with the explanation.

“They made the decision at around about Lap 14 to do that. At that time, Grosjean pitted which put Vettel in free air and he successfully covered any undercut against Verstappen but was also starting to come in Lewis’ winder very-very quickly.

“Indeed, his outlap was already quite a bit faster than Lewis already and that medium compound had a warm-up slope. What that means is it’s quite difficult for the first few sequences of corners, but into the second lap of driving on it, it becomes faster and faster.

“So there was a severe and genuine risk that in a few laps Vettel would be in Lewis’ window. We opted to make sure we covered that off by stopping Lewis and giving him enough time on track to deal with the warm-up and understand what he could do in terms of management to absorb that gap to Vettel.”

Meanwhile, Vowles also mentions that Mercedes were not surprised with how Bottas performed in the race as they felt the Finn was hooked up with the track and the car all-weekend which could be seen in his qualifying performance as well.