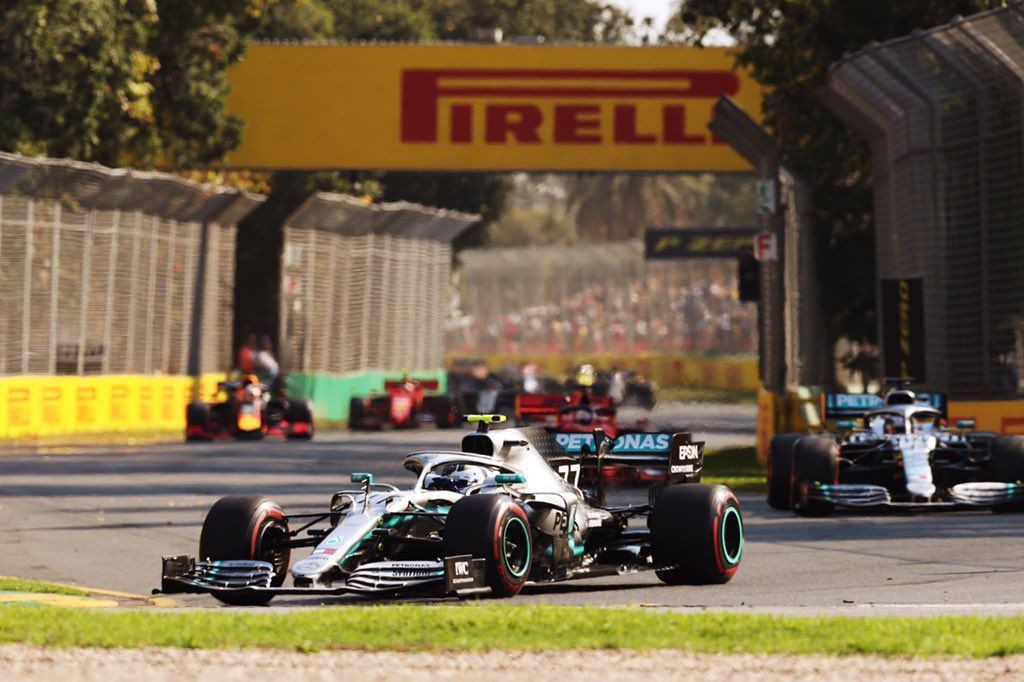 It was a clean start at the front with Mercedes’ Valtteri Bottas clearing pole-sitter and teammate Lewis Hamilton to take the lead of the Australian GP at Albert Park circuit with Ferrari’s Sebastian Vettel stationing himself in third.

Vettel had Ferrari teammate Charles Leclerc wheel-to-wheel for a moment but the Monegasque went over the grass in Turn 3 which allowed Red Bull Racing’s Max Verstappen to stay ahead of the Ferrari driver in fourth position.

Behind them, the first front wing casualty was Renault’s Daniel Ricciardo when he tried a move on Racing Point’s Sergio Perez around the outside on the main straight but the Australian probably hit the drain cover when he lost his front wing.

Somehow he managed to brake hard to avoid any hit in Turn 1. At the same time, Williams’s Robert Kubica lost his front wing after a scuffle with Red Bull Racing’s Pierre Gasly. Both Ricciardo and Kubica had to pit early.

Meanwhile, McLaren’s Carlos Sainz became the first retirement of Australian GP and of 2019 F1 season when his Renault engine gave away – which Zak Brown suspected it be as a MGU-K issue with fire may have damaged the unit in a much larger way.

As Bottas led Hamilton and Vettel in the front, Alfa Romeo Racing’s Kimi Raikkonen started the pit stop shenanigans on Lap 12 along with Renault’s Nico Hulkenberg, with Vettel being the first from the leading group on Lap 14 which got Mercedes to pit Hamilton, a lap later.

With Hamilton and Vettel starting to struggle later on, Mercedes and Ferrari opted to stop Bottas and Leclerc very late in the race with the Finn stopping on Lap 23 and the Monegasque on Lap 28 – Verstappen stopped in between on Lap 25.

In the meantime, the mid-pack had Raikkonen being helped by teammate Antonio Giovinazzi, whose late stop allowed the Finn to get away along with Toro Rosso’s Daniil Kvyat as he kept a train of cars behind for several laps.

By the time McLaren’s Lando Norris, Haas’ Romain Grosjean, Perez and Toro Rosso’s Alexander Albon could get through, it was already too late. Meanwhile, at the front, Bottas started to pull away handsomely as Verstappen got into thick of things.

He pitted for medium, same as Hamilton and Vettel but a 10 lap advantage helped the Dutchman to clear Vettel for third on Lap 31 with the chase on for Hamilton. At the same time, Ricciardo pitted to retire with Grosjean also parking at the sides.

A replay showed problems with his front left tyre coming lose after his pit stop issue but he ran for nearly 15 laps for the problem to arise. Like it started to look in the early stages, it was for Bottas to lose in Australian GP with the massive advantage he had.

He did it eventually to score his first Australian GP victory in a dominating fashion as he pushed hard towards the end to even get a point for the fastest lap of the race – the new addition in the points system from 2019 onward.

Such was his advantage that Hamilton was 20.886s away in second to secure a Mercedes 1-2 and open the 2019 season in style for the German manufacturer. The British driver held off the charge from Verstappen, who completed a fine first podium for Red Bull Honda.

It was a sorry day for Ferrari with Vettel only fourth ahead of Leclerc, who as advised towards the end to back-off and not fight his teammate. The ‘B-Class’ went to Haas’ Kevin Magnussen in sixth, 28.926s behind Leclerc and 87.156s from Bottas.

A bit off from Magnussen was Renault’s Hulkenberg in seventh ahead of Raikkonen, who led a train of cars until 11th which had Racing Point’s Lance Stroll, Toro Rosso’s Kvyat and Red Bull’s Pierre Gasly as the Frenchman missed on scoring anything.

The four cars were bunched up together until the end with the gap from Raikkonen until Gasly only 1.786s. Stroll, Kvyat and Gasly gained well in the race with a different strategy as McLaren’s Norris and Racing Point’s Perez losing out as a result.

Norris started off well but lost out in the end with Perez only 0.530s while Toro Rosso’s Albon just 0.708s behind the Mexican. Among the other finishers Giovinazzi was 15th with Williams’ George Russell in 16th and Kubica 17th.

Everyone from Hulkenberg until Giovinazzi was lapped once by the leaders with Russell lapped twice and Kubica thrice in the Australian GP after the Pole’s early pit stop due to front wing damage. DNF: Grosjean, Ricciardo and Sainz.