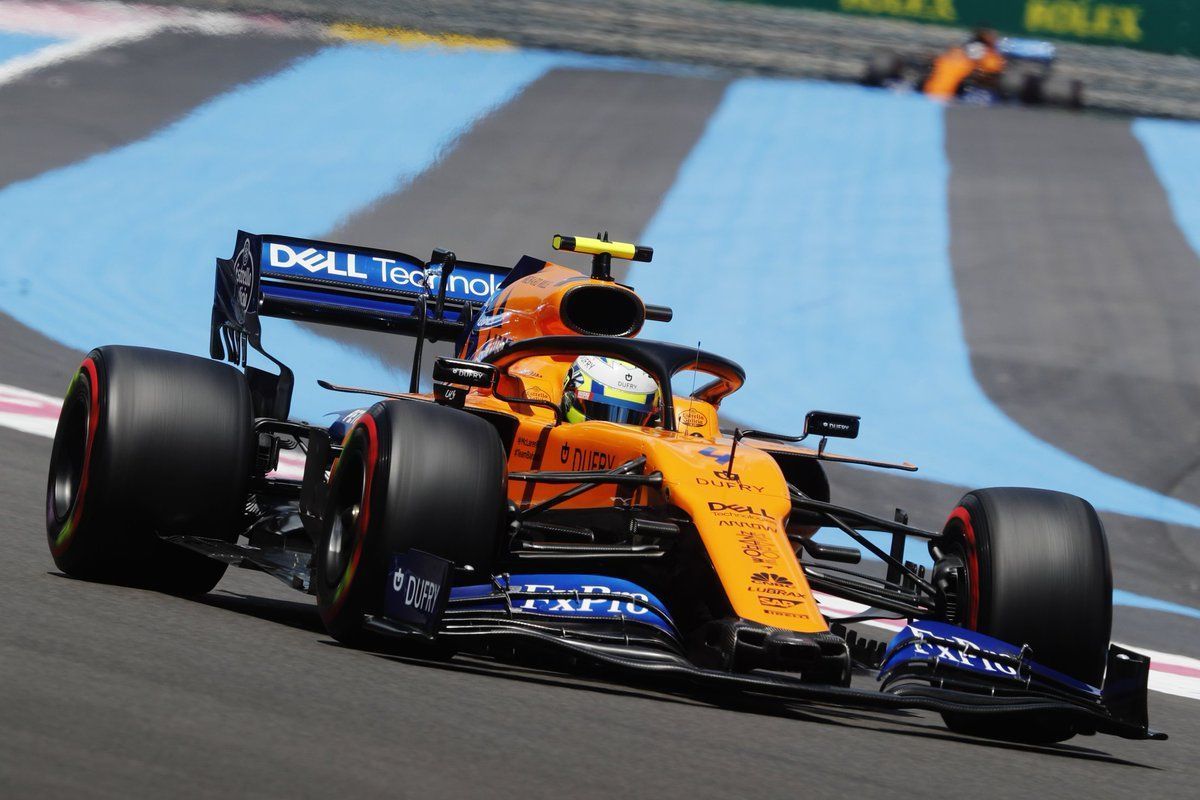 The McLaren drivers along with Alfa Romeo Racing’s Antonio Giovinazzi and Renault’s Daniel Ricciardo hope that they can carry the pace into F1 French GP to score points.

While the battle at the front seemed locked in favour of Mercedes in F1 French GP at Circuit Paul Ricard, the midfield fight is open with multiple teams in play, especially McLaren, Renault and Alfa Romeo with their drivers starting inside the Top 10.

There is no discounting Haas and Racing Point as well but it remains to be seen how they cope up. For now, McLaren seems to be ahead in France with Lando Norris ending up a solid fifth ahead of Carlos Sainz – the team’s best qualifying result since 2016.

The team looked solid all-weekend long with both Norris and Sainz close to each other but the British driver found more pace to beat his experienced teammate. “It’s a good achievement for myself, just in F1, to get fifth,” said Norris.

“But I think there’s a few other things which I’ve done, winning championships let’s say, which have been better. It’s a big highlight [though]. It’s something I’ll remember. It depends how much we go on to hopefully be able to win and so on, but so far, in F1, it’s probably my best achievement.

“I think our pace is obviously pretty good. I think the Ferraris are quicker, Mercedes are quicker, Red Bull look like we could fight, but you never know. You could have other people crashing, which obviously we’ll hope for! I think we can just get some good points.

“If we can race the Red Bulls, and kind of be around them, so kind of fifth onwards, I think we can be happy.” Sainz conceded that Norris looked a bit faster in Paul Ricard than him, even though he had to test new parts and give feedback while Norris ran freely.

They are in a big fight for fourth with Renault, who are only two points behind. The team gambled as well with the medium compound in Q2 which worked for Ricciardo but not for Nico Hulkenberg. “In Q2 I made a mistake on the first run,” said Ricciardo.

“I had a few moments, had to abort my first run in Q2 and then [my engineers] were like ‘we’re putting the medium on’. I hadn’t used that tyre at all this weekend, but obviously they knew something I didn’t.

“So I just had to put that in there, and that was a good lap, that got me in Q3, and I think eighth was where we were at. We’re all on mediums, so it will be interesting. If McLaren have the race pace that they have one lap, they could target a few of the guys in front.

“I’ll obviously target them, but maybe they can just tow me towards the front with them and [we’ll] have a good race.” Teammate Hulkenberg rued locking up on his final run, which eventually cost him the pace needed to get into Q3.

While McLaren and Renault fight it out, Alfa Romeo could fancy their chances to be ahead of Toro Rosso, Haas and Racing Point after Giovinazzi beat Kimi Raikkonen for the second qualifying in a row as the Finn couldn’t make it into Q3 due to a mistake.

“It was a positive qualifying,” said Giovinazzi. “Top 10, I think I am really happy with this. Tomorrow will be a difficult race, starting with the soft tyre, but we have good pace and hope we can also have a better result in the F1 gand prix.

“We start from the top 10 – we need to be there for the rest of the race, have a good strategy, good pace and finally try to get this first point.” Even though the other three midfield teams couldn’t make it into Q3, they are optimistic of a better race.

Haas remains confused with its tyre performance while Racing Point is waiting for a development while Toro Rosso only has Alexander Albon to make the charge. Taking back to what Norris said, Red Bull’s Max Verstappen did imply of McLaren’s pace.

“After making some improvements to the car we had a good qualifying compared to practice,” said Verstappen. “In Q3 I think we could have been closer to Ferrari but my final lap wasn’t very clean. Something happened in the last few corners.

“The car had an odd behavior, so we need to check that, otherwise I think we could have been closer to Ferrari. At the moment it looks like McLaren are very close but we should have three or four tenths on them. Again, we maximised our grid position.

“It’s good to be on the second row and starting on the medium tyre. I think we need a bit of luck for a podium, like we had last year, as this is not really our track with the circuit layout but it will be all about tyre management.

“I’m not sure we can fight Mercedes but I hope we can fight Ferrari. We will of course give it a good go and see how far we can get.”