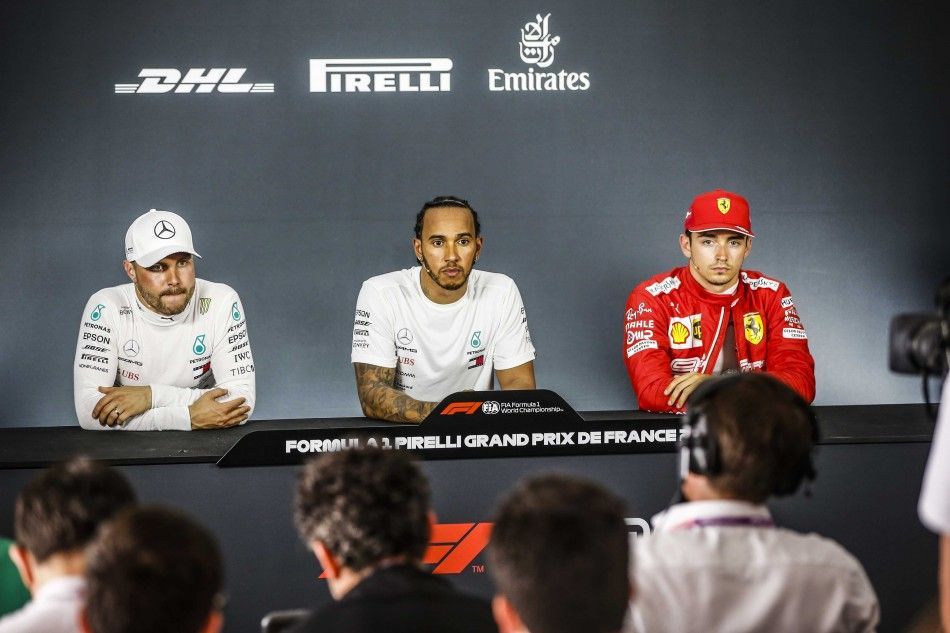 Mercedes and Ferrari were at opposite ends in F1 French GP qualifying as Lewis Hamilton relishes the pole challenge while Sebastian Vettel rued the lack of feel.

It looked all good for Mercedes in F1 French GP at Circuit Paul Ricard in the practice sessions which they converted well in qualifying as Hamilton took pole ahead of teammate Valtteri Bottas, with Ferrari’s Charles Leclerc in third and Vettel only seventh.

The German, particularly, had a nightmare Q3 after an upshift issue on his first run and not feeling right in the final one to end up outside the Top 5. For his rival Hamilton though, it was all well with only Bottas as his challenge, whom he saw-through to take pole.

“We’ve just been chipping away at improving the set-up of the car bit by bit,” said Hamilton. “Qualifying was when it was at its best, so a really great performance. I think generally the guys are really great at the timing, getting us out in the right window.

“I don’t know if people watching realise how important getting out at the right time is. You know, positioning on track is everything. I think through Q1 and Q2, Valtteri just had the edge and I was still dialling in the car, but once I got to Q3 I knew where I had to find the time, and it’s just about going out and doing it.

“The first lap was fantastic, really, really happy with it. However, I knew it was still relatively close and I needed to find some more areas in which I could improve. I went out for that second run. The second run, I was on for one of the best laps I have done for a long time.

“And it’s crazy, it never gets old, it never gets easier, and it’s always such a challenge, regardless of what position you are battling for. I was up four-and-a -half tenths coming into the second-to-last corner, but it’s really gusty out there, and I think I just lost the back end, partly through that or maybe going too quick.

“If anything it gets harder and harder to get these poles. Valtteri has been doing some epic laps in practice and qualifying through these first races and the Ferraris have been on our tail – obviously a bit of a bigger gap in France – but I’m still thinking the race is going to be a close battle, so I’m really grateful to be where I am.”

Meanwhile, Bottas missed out on improving on his final run with no tow on the straights as they got the positioning slightly wrong. “I think the car was behaving well – but all weekend I felt pretty good in the car and in a happy place but obviously I always knew it’s going to be close when it comes to qualifying as it’s been all weekend,” said Bottas.

“I think ultimately in the end Lewis in Q3 managed to get some better laps and he deserved to be on pole. From my side, in Q3, the first lap felt OK but the wind direction changed throughout the qualifying, Turns 8 and 9, I think, struggling all weekend a little bit.

“At some point I found some good lines there but they didn’t any more work with that wind direction. So small details here and there. There’s no massive things. In the second run I was a bit unlucky with no cars ahead, so I had no tow at all, so losing on all the straights.

“Tried to make the most of the losses in the last couple of corners and lost it. It’s unfortunate: obviously was hoping to be on pole but second is a good place here, it’s a long run into Turn 1.”

“So, I really worked hard for that and I was very happy to see that there were improvements this weekend on that. My Q3 lap felt good. The wind was quite different during the whole Q3, so it was quite tricky.

“I lost quite a lot of time in Turn 8-9 but overall, apart from that, it was a good lap, and the car felt good for the right moment, which is in Q3. So, on that, I’m very happy. Then the gap is still quite big so we need to work and hopefully it will be an exciting race.”

The Monegasque also explained that he was hurrying Vettel so that he doesn’t miss the flag to start his final lap, but he said all was fine in the end. On the other hand, Vettel said he had an up and down qualifying which affected his while performance in the end.

“It was up and down – some laps I felt really good, others I didn’t,” said Vettel. “In the end I didn’t get the best out of the car, which is not satisfying. But as I say it was difficult for me because some laps it was really good and was just coming, and other laps I don’t know why but I didn’t have the grip that I seemed to have the runs before.

“Shame that it happened in Q3 – it would have been better to be slower in the other segments, but that’s what it is today. The car was better than where we ended up. We reverted on most of the upgrades [that we brought here].

“So, obviously not the step that we expected. But I think we have good pace to have a good race. Obviously Mercedes are far away but we should be in the mix with Red Bull.” It will be big ask for Vettel to get back up with Hamilton looking set to get another win.