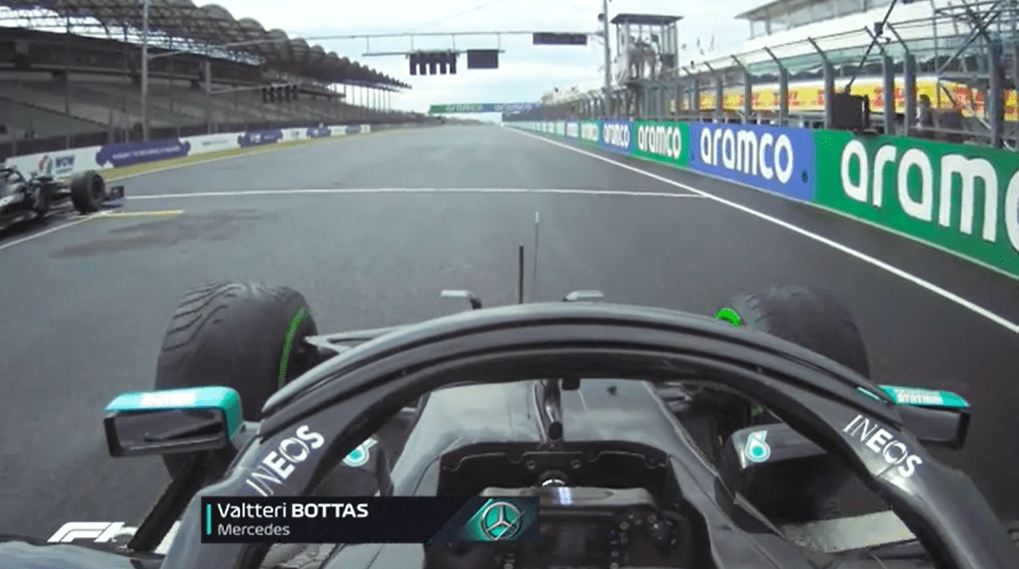 FIA Race Director Michael Masi has explained why Mercedes’ Valtteri Bottas was not penalised for an alleged jump start in F1 Hungarian GP.

Looking at the footage from the world feed, it clearly looked like a jump start for Bottas as he was shown to shave started his car before the red lights got off but quickly held off which resulted in a slow getaway off the line to start F1 Hungarian GP.

The wet track made it even tougher as he dropped places to be sixth before staging a comeback and under-cutting Racing Point’s Lance Stroll to be third. By then teammate Lewis Hamilton was already away but Red Bull Racing’s Max Verstappen was in sight.

They went for a pit stop and chase the Dutchman but it didn’t work out. Speaking about his move at the start before what Masi said, Bottas stated: “The best way I can describe it – I don’t know in detail what kind of lights went on but yes, I was looking at the start lights and, there was the five lights on, so really just waiting for them to go off, and just before when the lights went off, something either turned on or off, I believe it was the main page of the dash changed to different colour or something – a pretty bright colour.

“That’s all what needed for me to react. I thought the lights went off, and anyway, I was kind of half-seeing the start lights because of the Halo and the position I was, so yeah. It was an odd situation. That’s all what I can explain now. I’m sure we’re going to review onboards and what exactly happened and I will make sure that nothing is going to be changing on the dash any more just at a crucial moment – because we don’t want any distraction like that in a sensitive moment.

“That obviously made this weekend one of those inconsistent weekends that you try to avoid. But it has happened, so what can I do? Learn from this, move on, still very much in the game, it’s just one bad race and if you end up on the podium in a bad race for you, that’s still OK, and nothing is lost yet so there’s no point for me take any hit in the confidence on anything that I’m doing. I think otherwise it was a strong race from my side,” summed up Bottas.

The puzzling factor was no note from the FIA during the grand prix which set alight a debate. However, Race Director Masi explained what the deliberations were in the control room and how they eventually decided not to press a penalty.

“The means by which a false start is determined is actually clearly detailed in the sporting regulations and has been the same process for a number of years, which is the transponder that’s fitted to each car is the judgement mechanism,” said Masi to media including Racefans.net, Motorsport Network, AMuS, BBC, Reuters and more.

“There’s a sensor in the road and in the track as well. And there’s a tolerance within that. As we saw in Japan last year, that tolerance is the determining factor. So there was nothing further to have a look at. We spoke to the timekeepers immediately and they reviewed all the data and that was the end of the matter,” summed up Masi.

Regarding the scale of punishment, Masi added: “The jump start penalty has been actually changed for 2020, following some discussions and which is why you would have seen even with Kimi’s for being out of position was a five seconds penalty.

“As I recall, previously, it was either a drive-through or 10 seconds penalty in 2019 but obviously, if it is something as minute jump start, whereas if someone has accelerated and passed the field in Turn 1 as lights have gone out, obviously, it is a very different penalty that would be imposed,” summed up Masi.

In his post-race debrief, Masi also revealed that the matter was close quickly after knowing it was within the tolerance level. He stated that Mercedes never asked any questions, whereas one team did and were told about their findings.

Here’s details of the post-race investigations