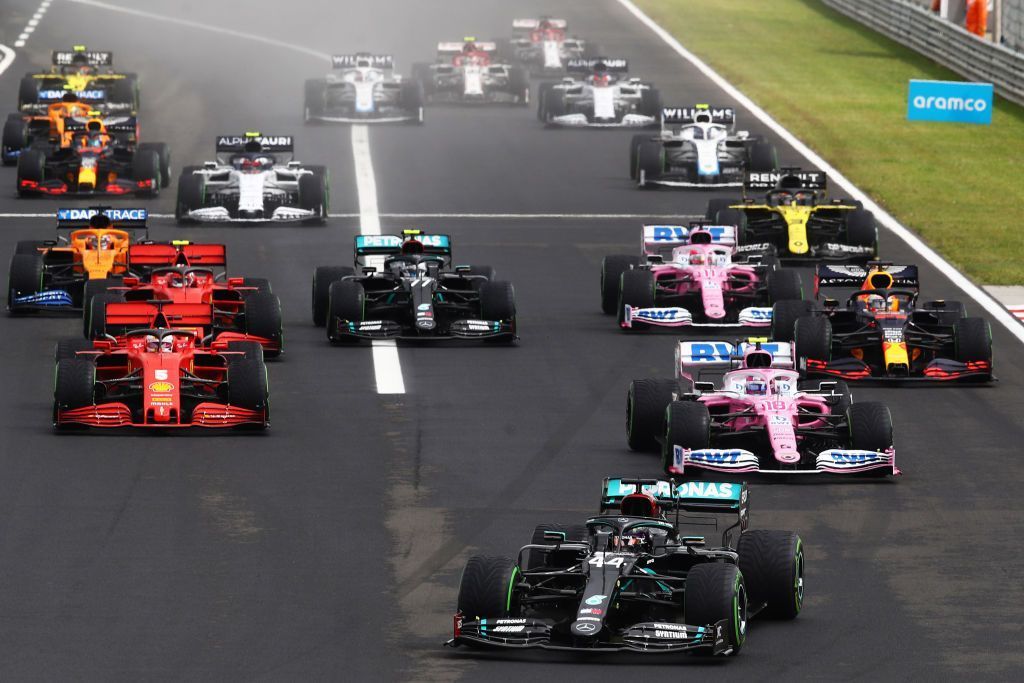 Mercedes’ Lewis Hamilton had it under control in F1 Hungarian GP as Red Bull Racing’s Max Verstappen did well to hold off Valtteri Bottas for second.

It was crazy already ahead of the start of the F1 Hungarian GP when Red Bull Racing’s Max Verstappen crashed on the build-up lap. He had a heavy damage on his front wing but the team managed to fix it along with suspension before the time limit.

There was still some nervousness but once on the formation lap, it didn’t deter as much. The weather was tricky at Hungaroring, though, with the whole F1 field going for intermediate tyres apart from Haas’ Kevin Magnussen.

The Dane, though, pitted to change to full dry along with Romain Grosjean and started from the pitlane, while AlphaTauri’s Daniil Kvyat was denied to do the same. Alfa Romeo Racing’s Kimi Raikkonen was penalised by five seconds by being on the wrong position.

Up front, the field was tentative with Mercedes’ Lewis Hamilton leading the way in F1 Hungarian GP from Racing Point’s Lance Stroll and Red Bull’s Verstappen. It was a slow start from Mercedes’ Valtteri Bottas as he dropped to the fag end of the Top 10.

Replays showed Bottas jumping the start before stopping but there was no investigation in the first 20 laps. He dropped to sixth behind Ferrari’s Sebastian Vettel and Charles Leclerc, with Racing Point’s Sergio Perez also losing places to be seventh.

The pit stop melee kick-started with F1 teams switching to the dry compound where interestingly Leclerc changed to soft while others around were on the medium. Hamilton still remained as the net leader ahead of Verstappen but the Haas duo were in the Top 5.

An early stop allowed them to be third and fourth with Magnussen ahead of Romain Grosjean but Stroll was menacing behind along with Leclerc, Bottas, Vettel, Albon and Perez in the Top 10. The pit stop, meanwhile, had multiple dramas as well.

Vettel had to wait for others to pass which was the same issue for McLaren’s Lando Norris. His teammate Carlos Sainz had a scuffle with Williams’ Nicholas Latifi after the team released him into the Spaniard as he suffered a rear-left puncture.

He was also handed a five second penalty. At the front, meanwhile, Hamilton led Verstappen as Stroll passed the Haas drivers to be third with Bottas following him but Magnussen and Grosjean were still running well in fifth and sixth.

The fight for seventh was on as Albon got past Vettel and Leclerc after a gritty fight with the latter having to pit after losing out to his teammate. Perez ran ninth with Ricciardo and Sainz chasing him as AlphaTauri’s Pierre Gasly retired due to engine trouble.

He had a brand new engine on the back after issues in whole of F1 Hungarian GP weekend. As for the senior team, the FIA put Red Bull under investigation for artificially drying Albon’s grid box using engine cooling leaf blower.

There was a supreme fight between Norris and Leclerc outside the Top 10 as the duo went wheel-to-wheel for couple of laps before the Monegasque made it stick in a clean tussle. Ferrari pitted Vettel as well to switch him to the hard compound.

With rain threat likely subsiding, most of the F1 field started to pit the second time but a few stayed out longer including the leader Hamilton. Among the gainers, Bottas earned one place to get himself onto the podium, clearing Stroll by undercutting him.

The pit stop also worked for Vettel as he jumped Albon and Perez, running in fifth, while Magnussen did well to be eighth ahead of late-stopper Ricciardo and Leclerc in the Top 10. The Dane lost out to the Australian but was safe from the Monegasque.

He was battling Sainz himself which allowed Magnussen to keep ninth. At the front, though, Bottas pitted for the third time despite having closed on to Verstappen. The same was done by Stroll as he came out right in front of the battling duo of Vettel and Albon.

For the final point, it was supreme fight between Leclerc and Sainz as the duo went wheel-to-wheel as well with the Spaniard finally making the move stick nicely at Turn 1, leaving the Monegasque in the clutches of Kvyat, Ocon and Norris.

It was all-clear for Hamilton as he pitted late to switch onto the soft compound and push for the fastest lap which he managed to get it despite lapping F1 rivals as he secured a dominant win in Hungarian GP ahead of Verstappen and Bottas.

The Finn closed in on the Dutchman but he held on by 0.750s to keep second with Stroll coming through to fourth ahead of Albon, who managed to pass Vettel in the closing stages. The German fended off Perez to secure a solid sixth.

Ricciardo almost had Perez as well but had to be content with eighth as Magnussen did an astonishing job to be ninth with Sainz rounding out the Top 10 as Leclerc hung on to 11th from Kvyat, whereas Norris passed Ocon to end up 12th.

Behind, Grosjean was 15th ahead of Raikkonen, with teammate Antonio Giovinazzi 17th from Williams’ pair of George Russell and Latifi. Everyone from Vettel until the Brit ended up a lap down, while the Canadian was five laps down.