Home In the Spotlight Marquez emotional after MotoGP return ride, rivals not surprised by pace 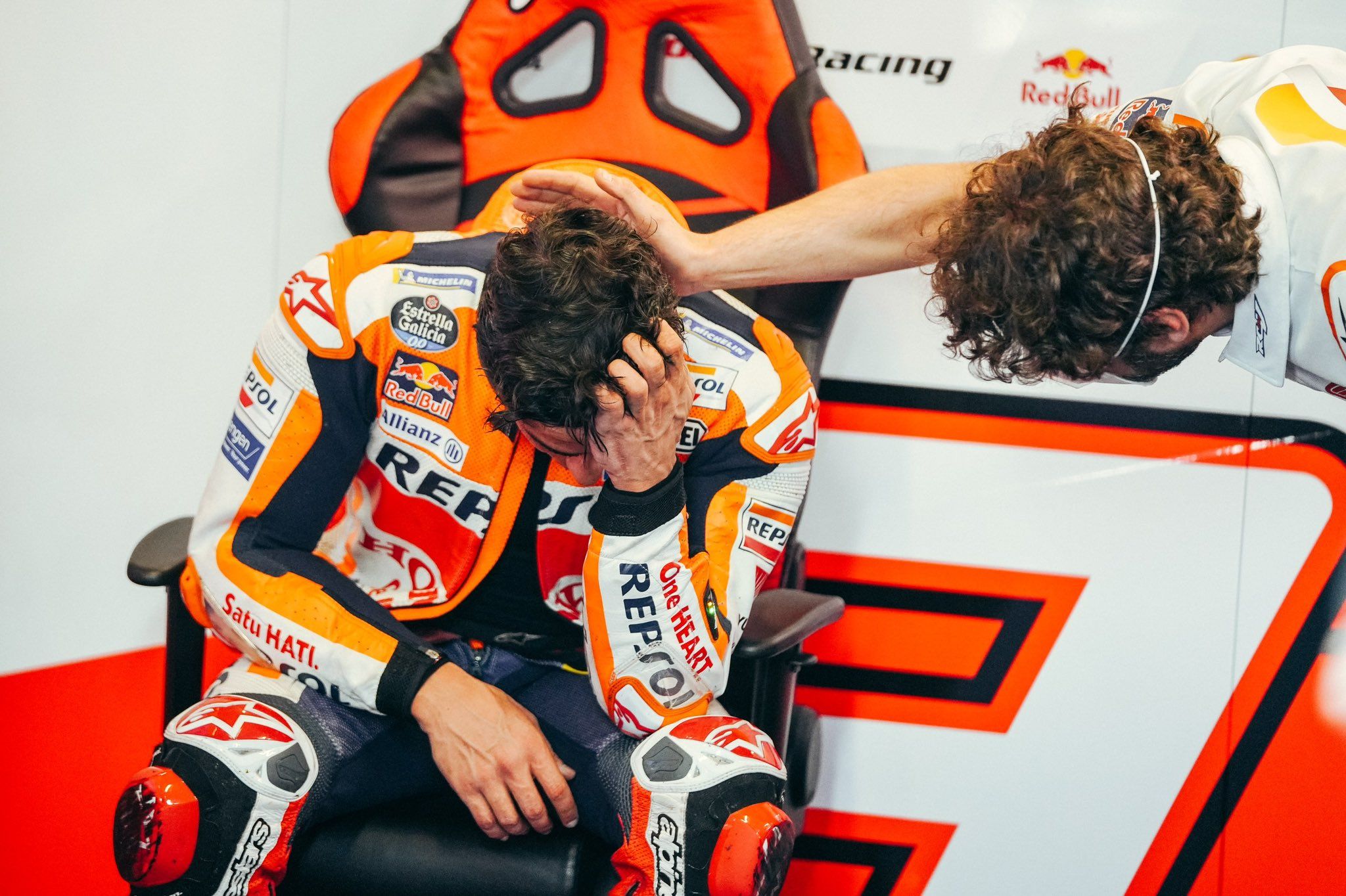 Marc Marquez speaks on the emotional moment after Portuguese GP, as rivals add that they fully expected such performance.

After a year away from any kind of racing or even traveling, Marquez made a solid return to MotoGP in Portugal, finishing seventh after a second row in qualifying. The Spaniard did have some pain, but that didn’t deter his old glory on track.

It was emotional for him after the race, though, he was not only spotted crying in his box but also when talking to media. Marquez noted that he doesn’t show his emotions as much, especially this side, but everything from last year went through his mind.

“Of course, emotions is the correct word,” said Marquez to media including MotoGP, Crash, Motorsport Network and more. “I’m a person who likes to keep the emotions inside, but when I arrived in the box with all my mechanics I just exploded and I couldn’t control the emotions.

“It has been a very long time that I’ve been dreaming about today, finishing a MotoGP race and it’s the biggest step in my rehabilitation, my recovery and to feel again being a MotoGP rider was my dream and it’s what I did in Portugal. So, when I arrived in the box, of course I was tried and I was exhausted.

“But it was the explosion of emotion that I couldn’t control, but was very nice. Maybe the hardest thing was the first laps because I was not in my place. You know in school when you play football with the older guys, they overtake you where you want. So, in the first laps I didn’t feel in my place, I didn’t have the pace, I didn’t have control of the bike and then everybody started to overtake me.

“But then I was calm, didn’t fight and just found my place and as soon as I found my place I started to increase my rhythm step-by-step and I was able to do my personal best lap in the end of the race. In the end I felt better and I was trying to catch Espargaro again, but then suddenly my body said ‘now it starts here’.

The performance of Marquez was not at all surprising for his fellow rivals, which includes his brother Alex, who ended up eighth behind him. “I expected that,” said Fabio Quartararo in the press conference. “He finished a little bit more than 10 seconds from the lead, but he never made 25 laps in a row. This track for me is the most physical track on the calendar.

“So, now he knows the feeling of doing a full race on a tough track. So now he will come back to a track he knows pretty well in Jerez, so for me it’s the result that I expected and in qualifying he was impressive. So, he’s back,” he summed up, as defending MotoGP champion Joan Mir echoed the Frenchman while talking about Marquez.

“For me also I expected one result like this from Marc,” he said. “The truth is that he looks like he’s close to 100% and he was able to make a strong comeback The truth also is that he’s been really, really strong also this weekend. It’s the first test he did with the Honda and for sure it’s not the same Honda from when he left.

“This makes everything more difficult, even if you are not at 100%, so it’s more difficult. He and his team did a great job and he managed to finish first Honda,” he summed up, as Francesco Bagnaia then added: “I was expecting his return would be like this. And after a weekend like this, because he was third in the first session, sixth in the second session, qualified sixth.

“So, I was thinking he would try to fight for the top 10 and he finished seventh. So, I was thinking that he was able to make a result like this. I think also he wouldn’t comeback if he wasn’t at 100%, so I think physically he is on top. For sure, riding a bike is different physically and riding for 25 laps is difficult. But he made what I was expecting, and at Jerez he will be on top for sure,” he summed up.

“But like I said on Thursday, it’s a special weekend for all the family for sure. It’s a weekend that, OK, can be better, but we both finished with a good result. I need to say that his comeback is unbelievable after many months. In the first laps we saw with him that he was not used to being in the race, and he made some mistakes, also the overtakes he did.

Here’s how Portuguese MotoGP panned out