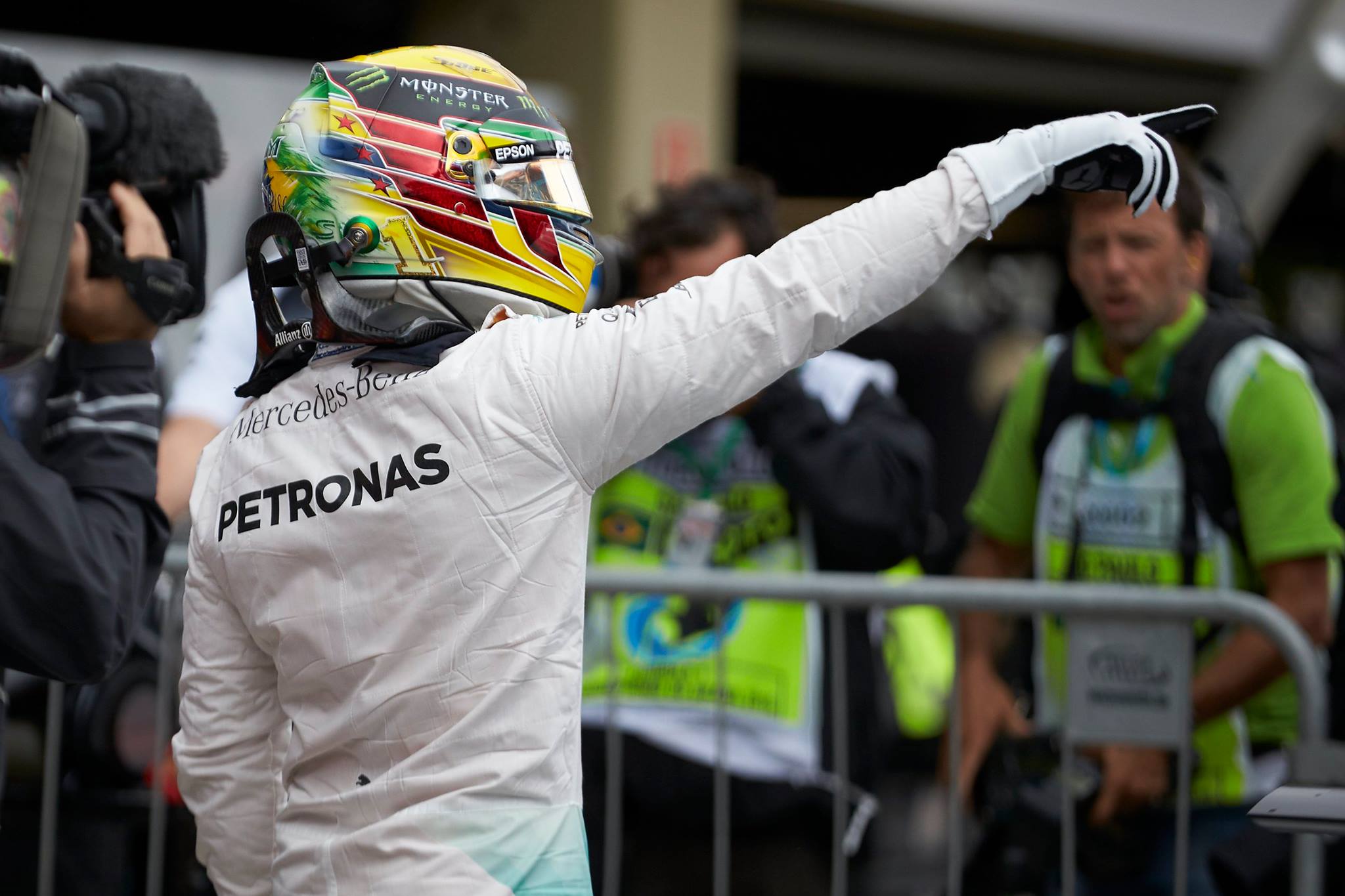 The rain came onto the circuit before the race started and Romain Grosjean crashed his car in the outlap. Lewis Hamilton was on pole position ahead of Nico Rosberg and Kimi Raikkonen. In order to avoid a safety car start, the start was initially reported of ten minutes but the stewards eventually decided to start the race under safety car.

After seven laps under safety car, the race started again. Rosberg set a gap between him and Hamilton to see better while Max Verstappen overtook Kimi Raikkonen in Senna’s “Esses”. Kevin Magnussen pitted to put on inter tyres.

Verstappen used his go-karting experience to take outside lines to get closer to Nico Rosberg. Magnussen was quite fast with inters and McLaren and Williams cars decided to pit for inter tyres. On lap 11, Sebastian Vettel spun in the last corner but managed to get back again to change tyres.

Marcus Ericsson spun in the last corner and hit the wall and he could not prevent his car from blocking the pit entry. While the safety car got on track, the Red Bull cars avoided the lose Sauber and Ricciardo entered the pit lane when the light was red.

The Renault cars pitted during the safety car to put on extreme wet tyres. On lap 19 the safety car went in. Hamilton managed his restart but Kimi Raikkonen spun and hit the wall in the straight-finish line. The race was therefore red flagged.

During the race interruption, Felipe Massa was awarded a five second penalty for overtaking Esteban Gutierrez before the safety car line. Daniel Ricciardo was awarded the same sanction for entering the pitlane when it was closed.

After half-an-hour of interruption, the race went one behind safety-car with the obligation for all drivers to wear extreme wet tyres. All the drivers went out except Jolyon Palmer who had his car damaged following a contact with Daniil Kvyat. Nico Hülkenberg had a puncture and had to pit under safety car.

All the drivers were more gathered than ever and Verstappen passed Rosberg in the Esses of Senna. Ricciardo also made his way up and overtook Sainz while Vettel overtook Wehrlein. Jenson Button pitted on lap 35 like Felipe Massa.

On lap 39, Verstappen half spun in the last corner but eventually saved it and remained ahead of Rosberg. On lap 41, Ricciardo pitted for inters and took his penalty. Further back, Vettel overtook Alonso with authority while Ricciardo claimed the fastest lap with intermediary tyres and Red Bull decided to stop Verstappen to change tyres.

Jenson Button, who was complaining about the lack of grip of his inter tyres, begged for his team to pit for wet tyres. Like Verstappen a few laps earlier, Rosberg also half spun at the top of the hill but eventually saved it.

Felipe Massa, for his last home race, did the same mistake than Ericsson and crashed into the pitlane entry, involving the safety car to enter and reduce the gap between the two Mercedes which was up to 25 seconds. Verstappen pitted on lap 55 just before the safety car went in.

Hamilton and Rosberg managed their restarts unlike Alonso qui spun at the top of the hill but manage to go back. Perez was third ahead of Sainz, Vettel and Nasr. On lap 60, Verstappen overtook Ricciardo and Kvyat for P9, then Ocon and Nasr while Gutierrez had to give up.

The Dutch was doing the show and attacked Vettel and overtook him by pushing him out. On the next laps, he overtook Sainz and Perez to claim a well deserved podium.

Lewis Hamilton won the Brazilian Grand Prix for the first time ahead of Nico Rosberg and Max Verstappen. Perez, Vettel, Sainz, Hulkenberg, Ricciardo, Nasr – who scored Sauber’s first points- and Alonso completed the top 10. In the championship, Rosberg has a 12 points advantage over Hamilton before the last week-end of the season.