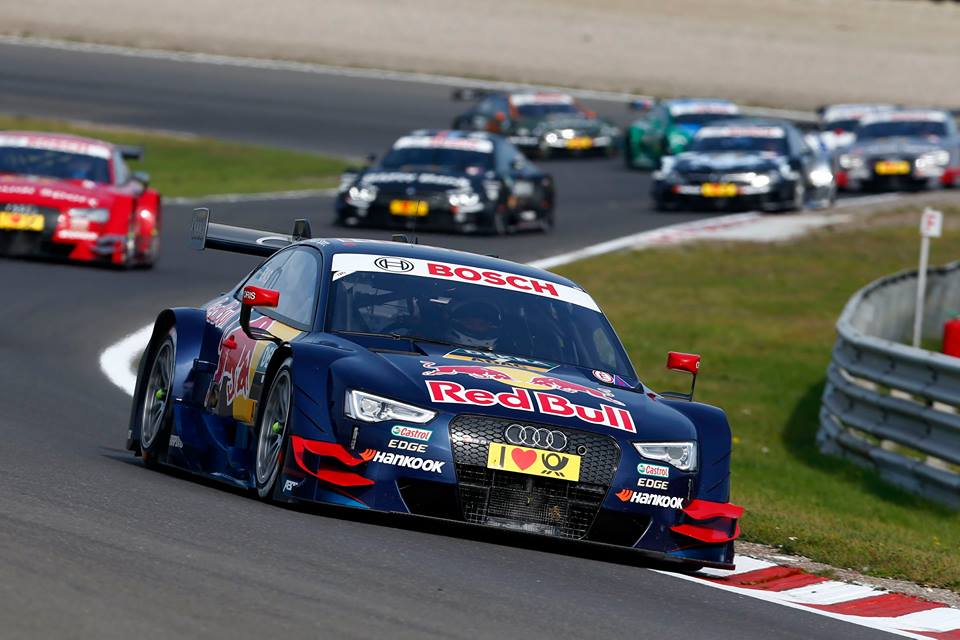 Swedish driver, Mattias Ekström won a difficult race this afternoon thanks to Audi genius strategy and a little bit of chance. He managed to escape every contact and all 4 safety cars. Wittmann and Tomzcyk complete the podium while Juncadella is 8th and Molina did not finish.

Today was sunny in Zandvoort and after all the changes on the grid, due to Ekström and Mortara penalties, all drivers were ready for the start of the warm-up.

On the first line were the DTM champions Rockenfeller (2013) and Wittmann (2014) which gave a little bit of salt to the second to last race of the season. Behind, Timo Glock found himself stuck at the beginning of the lap but he was finally able to go out on the track, only last, and he suffered even more problems on his M4.

As all 5 fires went out, the race started quite cleanly as all drivers were able to pass the first curve without any incident. After running for a few meters next to Rockenfeller, Wittmann took the interior in the first curve. Behind, all positions shifted, especially those held by drivers on hard tyres who were slower and therefore left positions.

Di Resta went a little wide and he lost a part of his back wing. Few laps later, Tambay lost control of his car and hit the bareer. His stint prompted the intervention of the safety car which benefited Juncadella who went straight to the pit. Other drivers on hard tyres also benefited from it and the gap between them and others got reduced.

After two laps, the safety car exited and everything went mad again. Three cars raced next to each other in the first curve. The following lap, Da Costa touched Di Resta, his maneuver is under investigation by the stewards.

At the front, the situation was changing as well as Rockenfeller caught upon the leader of the race, Marco Wittmann who went to the limit and tried to breach the gap which facilitated the arrival of Müller upon the leading group. After three attempts, Rocky passed Wittmann whose tyres were nearly dead, he went into the pits followed by Paffet and Tomzcyk.

As all drivers were going in the pits, the safety car went out again after Farfus lost control of his car. He was hit by Juncadella who was trying to pass him and sent him in the barriers. Di Resta retired a while after because of damages on his car.

As the race was relaunched, Rocky was winning seconds as Meller went a little wide and lost two places and another one which indicated he might have issues with his tyres.

With only 20 laps to go, a new race started. Most of the drivers changed their hard tyres, those who were on soft started to stop in the pits. In the following lap,the safety car went out for the third time. Viertoris hit Muller who lost control of his Audi and hit the protections which gave a lot of work to the stewards who chose not to give any penalty.

This safety car benefited more the drivers on soft tyres, and the first of them, Mattias Ekström, in 9th place, 7 seconds behind the lead. Ekström was on fire and passed Petrov, Hand, Wherlein, Paffet and even Mortara. He reached the second place just as Rockenfeller went in the pits.

Finally, Ekström took the lead and increased his advance on the pack. Rockenfeller got out of the pit farther behind. Stewards had much work analyzing a couple of drivers who had used their DRS when it was not allowed.

As there were only 9 remaining laps, the safety car went out for the fourth and final time. Tambay gave everyone a little scare as he went out in the same place as Tambay but got stuck in the gravel. The safety car stayed on track for two laps as Ekström slowed everyone down.

Behind, Wherlein lost many places, Vietoris fought a lot and tried to win the fourth place held by Mortara. Spengler hit Green who fell to the last place. In the final laps, Ekström was followed by a string of drivers who were unable to reach him. Molina retired in the last lap.

Ekström signed a great victory both on the wall and on track. Wittmann finished second followed by Tomzcyk. The rest of the positions remained the same except for Spengler who could not keep his time because he did not observe a drive through.

The race in Zandvoort was a great one with much action, great fights and a lot of safety cars. Audi won with the best strategy, which with all the incidents, helped Ekström take the trophy home.