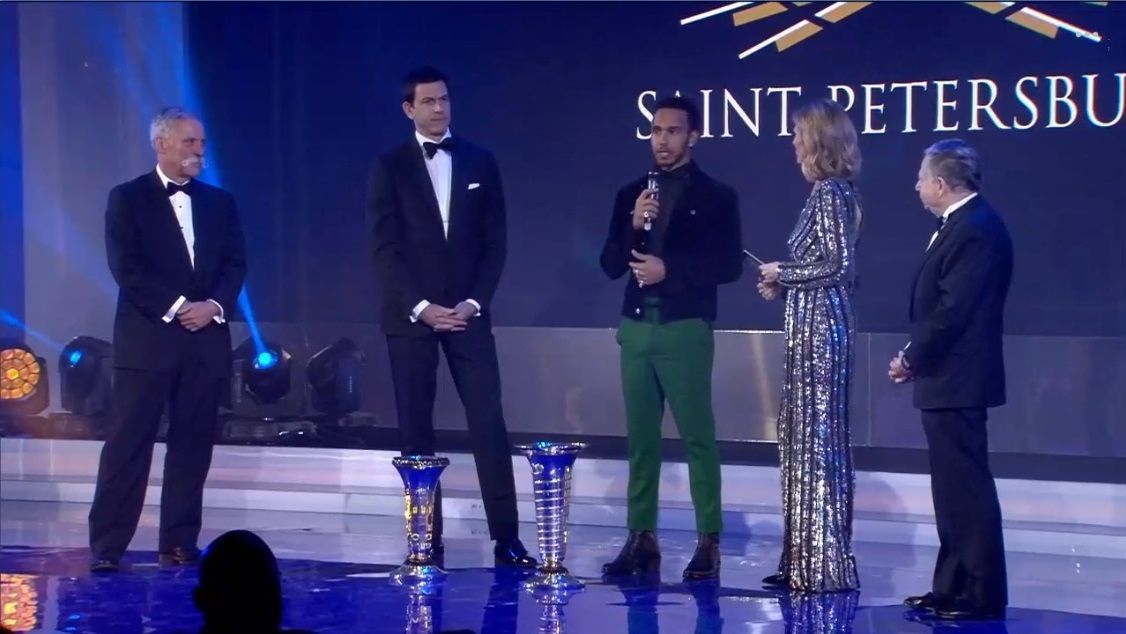 The annual gala for the 2018 season took place in Saint Petersburg in Russia  on Friday evening – ending the year celebrating the champions from various championships and honoring the best racers and moments, which took place during the year.

Beside his F1 trophy, Hamilton took the big voted award of the Personality of the Year – taking it away from Max Verstappen who won it thrice already. He beat some well known personalities to win the award which included his Mercedes boss Toto Wolff.

The Rookie of the Year went to Leclerc again after he took it for winning the FIA Formula 2 Championship in 2017. This time the Monegasque won it for his supreme debut with Sauber in F1. He couldn’t make it to collect the award but had a video message.

The Mexican GP, meanwhile, won the Best Promoters Trophy for the fourth time in a row as the Action of the Year award went to World Rally Championship’s Teemu Suninen for his epic save in his home Rally Finland.

In the more traditional awards, Mercedes took its constructors’ trophy while Hamilton had his drivers’. Ferrari’s Sebastian Vettel and his outgoing teammate Kimi Raikkonen – who ended up being drunk on stage – took the second and third place trophies respectively.

The FIA Formula E Championship winners Vergne and Audi took their trophies as well with the latter represented by Allan McNish. The WRC’s drivers’ trophy went to Sebastien Ogier with Julien Ingrassia and the manufacturers’ award going to Toyota.

In the junior single-seater categories, George Russell was awarded with his F2 trophy and Mick Schumacher took the European F3 title along with their respective teams ART and Prema taking the teams’ trophies.