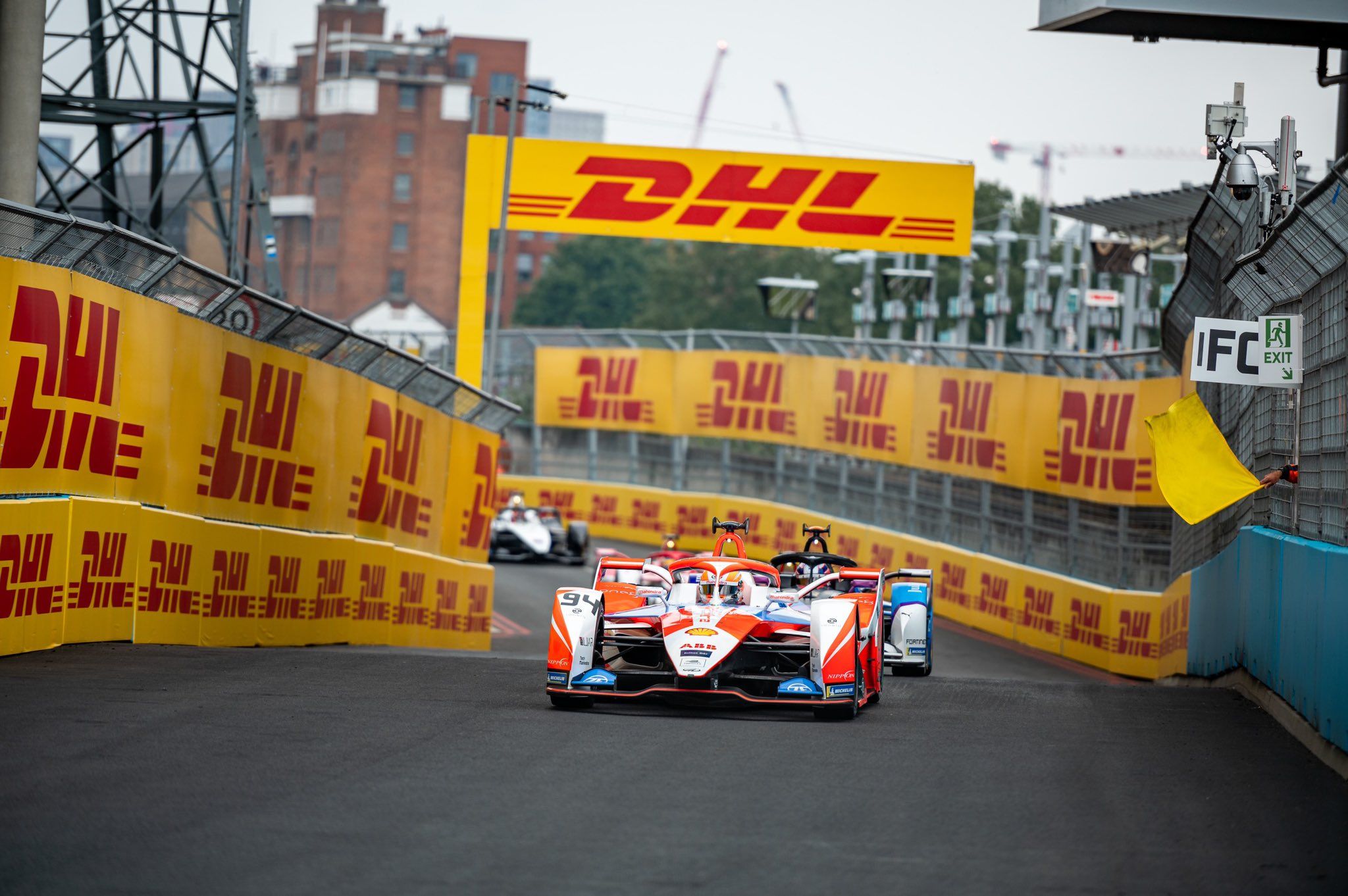 Pole-sitter Stoffel Vandoore led the way in Race 2 of Formula E London EPrix in his Mercedes as the Top 10 settled in the same way they started. It was Nissan e.dams’ Oliver Rowland in second from Mahindra’s Alexander Lynn in the Top 3.

There was trouble again for Mahindra’s Alexander Sims, who was forced to pit at the end of Lap 1, with NIO’s Tom Blomqvist in the pits too. The latter part of field saw more dramas with Jaguar’s Sam Bird hitting Envision Virgin’s Nick Cassidy and losing places.

Both the DS Techeetah drivers managed to pass Bird, as just up the road Nissan e.dams’ Sebastien Buemi and Audi’s Rene Rast came together heavy. Already the two had a small collision early on the lap and the fight continued for the rest of the lap.

The hairpin then saw Buemi tried to pass Rast but pushed him onto the wall, leaving the German with no space. He retired immediately with the safety car deployed as the Swiss driver was handed a 10s stop and go penalty for causing a collision.

Before the safety car, de Vries already got past Lynn for third and he pushed on Rowland after the re-start and had the place making it a Mercedes 1-2. There was another safety car period for a collision between Porsche’s Andre Lottrer and Antonio Felix da Costa.

The Portuguese driver went for a move on the inside in the right-hander but Lotterer kept coming towards him leading to a collision. Da Costa retired immediately as the Porsche driver was handed a drive-through penalty for causing a collision.

The re-start was a disaster amid confusion of di Grassi leading. The Brazilian went through the pits just when the safety car was to dive in and took the race lead. He was put under investigation, as Vandoorne and Rowland collided at the hairpin.

Rowland locked-up and hit Vandoorne, allowing others to sneak past. Just a corner later Evans and Guenther also had a collision but managed to continue on. The Nisan e.dams driver was handed a 5s penalty for causing a collision.

At the front, de Vries not only lost the lead but also second place with di Grassi and Lynn using the Attack Mode to get past him. Evans steadied in fourth but he couldn’t take the Attack Mode properly, which allowed Frijns to catch him straight up.

The Dutchman already cleared Guenther in a solid move, who lost to Wehrlein too. BMW Andretti’s Jake Dennis caught the pack in eighth with Cassidy and Venturi’s Norman Nato in the Top 10. At the front, di Grassi was handed a drive-through for safety car infringement.

This gave Lynn the net lead from de Vries as Evans fought back through after losing to Frijns. Despite the penalty, the argument was still on as team boss Allan McNish was seen sprinting to the stewards office, while deliberations continued on.

Replays showed di Grassi stopping in his box for a brief moment. The Brazilian was eventually shown a black flag but finished first on the road. But it was Lynn with his first Formula E win in Race 2 of London EPrix, with de Vries second from Evans in the Top 3.

Wehrlein was fifth with Guenther sixth after teammate Dennis pitted to serve his drive-through penalty on the final lap to drop to 10th, as Cassidy was seventh with di Grassi classified eighth from Camara in ninth.

There was late collision for Nato and Bird at the same hairpin of drama. It looked like a heavy hit but strangely the two managed to get going. Dragon’s Joel Eriksson missed out on points in 11th, with Vandoorne ending up 12th despite all the incidents.

UPDATE: Post-race, the stewards adjudged Bird as the guilty party in his incident with Nato and handed him a three-place grid drop for Berlin’s Race 1. At the same time, Audi were handed a fine of 50.000 euros, where 45.000 euros is suspended for the rest of 2020/2021 season, unless they repeat it.

“The Competitor thought that the given penalty (Drive Through) was wrong, therefore
they did not inform the driver about that and did not instruct him to serve it,” stated the stewards. “This behavior is not acceptable. It is not up to the Competitor to decide which penalty is wrong or right.”

Additionally, di Grassi has been disqualified from the race, which promotes Camara to eighth, followed by Dennis and Eriksson – where Dragon Penske registered a double points finish.

UNSEEN FOOTAGE!@Lucasdigrassi almost pulled off an audacious move after nipping through the pitlane to grab the lead during a safety car period.

But it was ruled he didn't come to a stop before exiting the pit and was black flagged for declining a drive-through penalty. pic.twitter.com/DeXEI11K0V