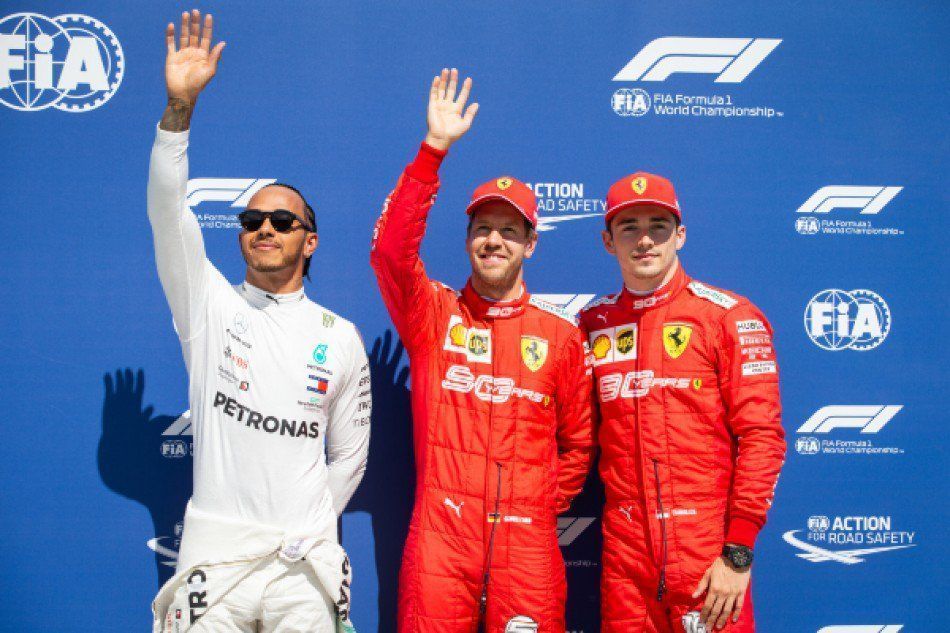 Ferrari’s Sebastian Vettel and Mercedes’ Lewis Hamilton both sounded happy after F1 Canadian GP qualifying but their teammates Charles Leclerc and Valtteri Bottas not so much.

It took 17 F1 races for Vettel to score his first pole in Canadian GP at Montreal on Saturday, as it was evident from the German’s celebrations as to how much it meant to him. On the other hand, Hamilton missed out on pole but was happy still with the fight at hand.

Hamilton had two purple sectors to start his final lap but he lost it all in Sector 3, while Vettel was green in the first two sectors and just had enough to better Hamilton in the final one to eventually secure a much needed pole for Ferrari.

“A great day,” said Vettel. “It’s been a while and mostly for the team I think the last couple of races have been quite tough. So coming here and showing a stronger form than we had in the last races is positive. We knew that the track in a way would suit us.

“But still we have to do the job and the car felt better and better throughout qualifying. Not easy with the interruption with the red flag. I’m still full of adrenaline. I’m really happy; I really enjoyed it. I wish I could do it again just for the fun of it.

“I had to pace myself in the first two corners because getting the tyres to grip up wasn’t straightforward but after that it was just a joy. The car was shouting ‘keep going, keep going’ and really enjoyed it. I wasn’t quite sure if Lewis is improving.

“Normally he’s pretty handy around here, so I wasn’t sure it was enough but then they screamed on the radio ‘pole position’, I really enjoyed it. It’s only part of the job and the main thing will be the race on Sunday.

“It will be a very long race and difficult to fight and keep them off but from where we start I think it looks like a god race. There’s a reason why we were able to put the car on pole, but it will be a very very close battle.

“We know our strengths, we know our weaknesses. We are very quick down the straights, let’s assume not so easy to pass but we will see. It’s a long race, we know that in terms of pace it will be very very close and we need a perfect race to fight for the win.”

Despite falling short, Hamilton was happy to get second, especially after missing FP2 due to a wall hit. The British racer was particularly happy for Vettel and the fight he can get at the hands of Ferrari on Sunday. “Not surprised with the result,” said Hamilton.

“I think obviously all weekend Ferrari had a really great pace and for a large part of it they were six tenths up on the straights. So we fought so hard throughout the weekend to make improvements. I’m actually really happy for Seb, he clearly did a really great lap.

“My first lap was really good and it felt great for a second to be on pole, particularly as I missed all of FP2, so quite far behind but it’s been a real solid day from us. Obviously the last sector – I think you can now start writing that they have the party mode.

“I don’t know who said we had the party mode in the beginning. End-of-straight speed was particularly where we lost out in the last sector but nonetheless hopefully the race will be close. It’s great to be able to split the Ferraris.

“It wasn’t frustration, it’s just that the team rely on me. It was a good lap but it was not good enough obviously. I had two really solid laps, no mistakes and I’m generally really happy with the job I did.

“But of course you can go back to the drawing board and say there’s always going to be a little bit more time in it but I don’t think I had two-and-a-half tenths, what they had or whatever it was. We just have to keep pushing, keep fighting.

“We’re still in a strong position. But I think this is great for racing anyway. I think this is what we and what the fans want, to see us so close. If you looks at the top 15 or something there was around a second between us all. That’s really great to see.”

While the two champions had a good time, their teammates did not have all the luck. Leclerc’s learning phase showed as he slipped away as the session progressed from Q1 to Q3 to drop back more than half a second behind Vettel.

“This is a point I need to work on, to try to set up the car, especially for Q3,” he said. “In Q1, the car felt quite good – then Q2 a bit worse and then Q3 it slipped away and I also did some mistakes.

“I need to understand from where it comes to just try to anticipate the track evolution and have the car at its best in Q3. It’s my fault and I need to work on that to make it better.” The Monegasque was also given a warning for missing a bollard by the FIA.

Meanwhile, Bottas had a really scrappy Q3. He made a mistake on his first run to have the spin at Turn 2 but managed to save his car handsomely. However, his out lap didn’t work out well with the traffic and on the flying lap, he had too many lock-ups.

“I made a mistake in the first run of Q3, had a snap and ended up spinning out of Turn 2,” he said. “I was lucky that I didn’t hit the wall, but it put me on the backfoot for the second run. My second lap was pretty messy.

“I had a number of lockups and didn’t do a great job in the corners. It’s not a lap that I’m very proud of, but mistakes happen. I need to learn, move on and come back stronger. The car was feeling good and our long run pace looked strong on Friday.

“So, I’m confident that there will be some opportunities in the race. Overtaking is possible on this track and we’ve seen great racing here in the past, so I’ll go flat out and try to get as many points as possible.”

#F1 No penalty for Leclerc for taking the bollard on the wrong side but a warning has been given. #CanadianGP #MsportXtra pic.twitter.com/jtrPOPDUrq

#F1 The tyres left to race with. Could Verstappen start on the hard tyre from P9 ? #CanadianGP #MsportXtra pic.twitter.com/yUK4IuxnD6