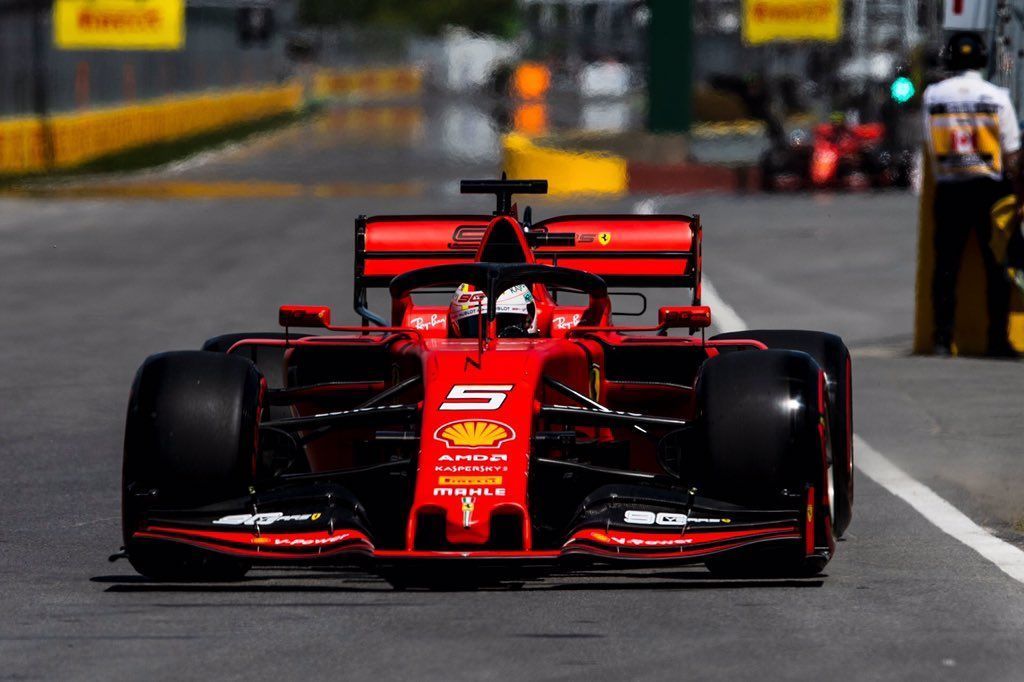 The first part of F1 Canadian GP qualifying at Montreal was intense as all of the drivers at front improved on their lap times on their second and third flying laps with Ferrari’s Sebastian Vettel leading Charles Leclerc and Mercedes’ Valtteri Bottas.

Red Bull Racing played a gamble as Pierre Gasly did not venture out despite being in a position where it could have resulted in a disaster but he only dropped to 12th in the end. It wasn’t a good run for the Racing Point drivers though with both knocked out in Q1.

The Canadian used the old power unit from Mercedes which has done six races already after an ICE failure with the Phase 2 engine. Williams rounded out the back of the grid with George Russell (1m13.617s) ahead of Robert Kubica (1m14.393s).

The second part of qualifying saw a strategy game being played by the Top 3 teams as Mercedes, Ferrari and Red Bull’s Max Verstappen all ventured out on medium compound to set their best lap and perhaps start the Canadian GP race on the harder tyres.

While it seemingly worked for Mercedes and Ferrari, it didn’t for Verstappen as he was only 11th after his first run and was forced to head out later on the soft tyres. Red Bull decided to split their strategy with Gasly on the soft compound initially, but it didn’t work.

It was an eventual disaster for Red Bull and Verstappen as a crash for Haas’ Kevin Magnussen on the main straight ended the session and denied the Dutchman a chance to improve as he was knocked out in 11th with his time of 1m11.800s.

Ironically, Magnussen made it into Q3 with the 10th best time. He not only denied Verstappen but also teammate Romain Grosjean, who couldn’t set a time and was only 15th after the Dane brushed the ‘Wall of Champions’ and skid across to hit the pitlane wall.

The third part of qualifying did not start well for Bottas as he spun at Turn 2 which destroyed his first set of tyres and left him with only set to get through. Teammate Hamilton had provisional pole with a 1m10.493s.

Ferrari went for multiple laps on their first stint but it didn’t work as Vettel stayed second from Leclerc. The second run intensified at the front of the field as the fight between Hamilton and Vettel went on until the end of the session.

Hamilton improved on his time to set a 1m10.446s despite having had a purple in Sector 1 and Sector 2 but lost out in Sector 3. His rival Vettel had two personal best sectors and faltered in the final sector but still managed it better to take pole with a 1m10.240s.

It is his second consecutive Canadian GP pole and his first in 17 F1 grand prix – it is Ferrari’s second pole of 2019 after Leclerc in Bahrain. The Monegasque was third with a 1m10.920s but is under investigation for going over the sausage kerb than left of it.

Behind him, it was Renault’s Daniel Ricciardo (1m11.071s) in fourth with the Australian registering his best qualifying result with the tam as he managed to beat Gasly (1m11.079s) and Bottas (1m11.101s).

The Finn was compromised by traffic on his out lap which meant he did not have the grip in the end. On a power circuit, Renault showed intent with Nico Hulkenberg (1m11.324s) in seventh ahead of the McLaren duo.

Lando Norris (1m11.863s) out-qualified Carlos Sainz (1m13.981s) to be eighth with the Spaniard not completing his final quick lap as all four Renault-powered cars made it in the Top 10. Sainz, though, is under investigation for impeding Albon earlier in the session.