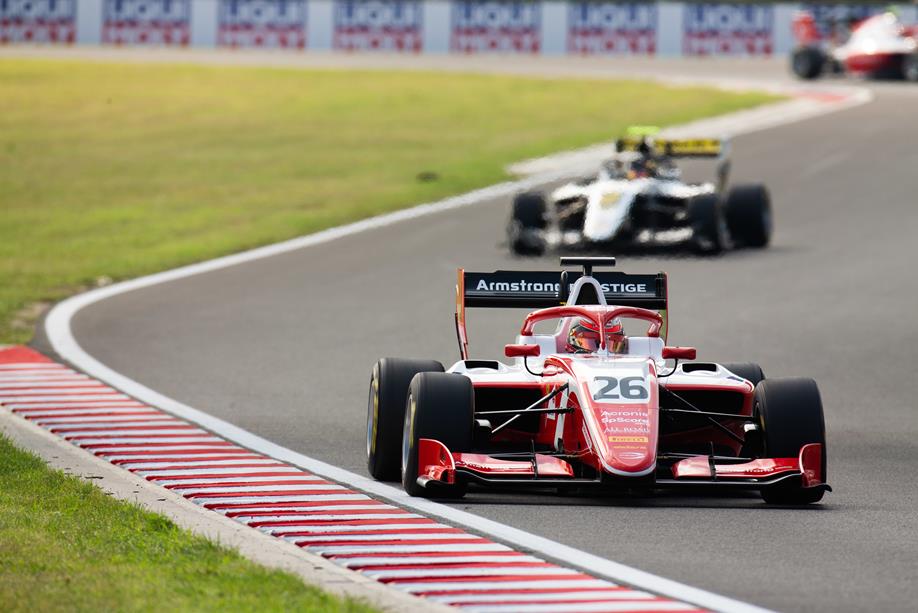 The reverse grid pole-sitter Prema’s Armstrong nearly lost his lead at the start of the F3 sprint race at Hungaroring when he went wheel-to-wheel against Hitech GP’s Pulcini but the Kiwi held on with Carlin’s Felipe Drugovich in third.

The lead battle settled in as Armstrong and Pulicini pulled away but Drugovich came under attack from Shwartzman as the two went wheel-to-wheel for few corners when the Russian made a slight contact with the rear right of the Brazilian in the right-hander.

It caused for a puncture to Drugovich which forced him to retire as Shwartzman hung on for few laps with a broken front wing. It was too much for the Ferrari junior though as he eventually retired, when ART’s Fewtrell came to a halt on the track.

The British racer managed to continue on but fell to the back of the grid. At the same time, Hughes was on charge again as the British racer cleared Vips for third as Armstrong eased in to score his first F3 win of 2019 in the sprint race at Hungaroring.

The Ferrari junior joined Shwartzman and Daruvala to win for Prema in the new F3 series as Pulcini and Hughes completed the podium positions, with the latter making it two third place finishes in a row at Hungaroring to end the first half of 2019.

Red Bull junior Vips ended up fourth but the Estonian came under late pressure from Lundgaard and Tsunoda, who finished fifth and sixth as Daruvala recovered to score points in seventh with Carlin’s Logan Sargeant taking the final point in eighth.