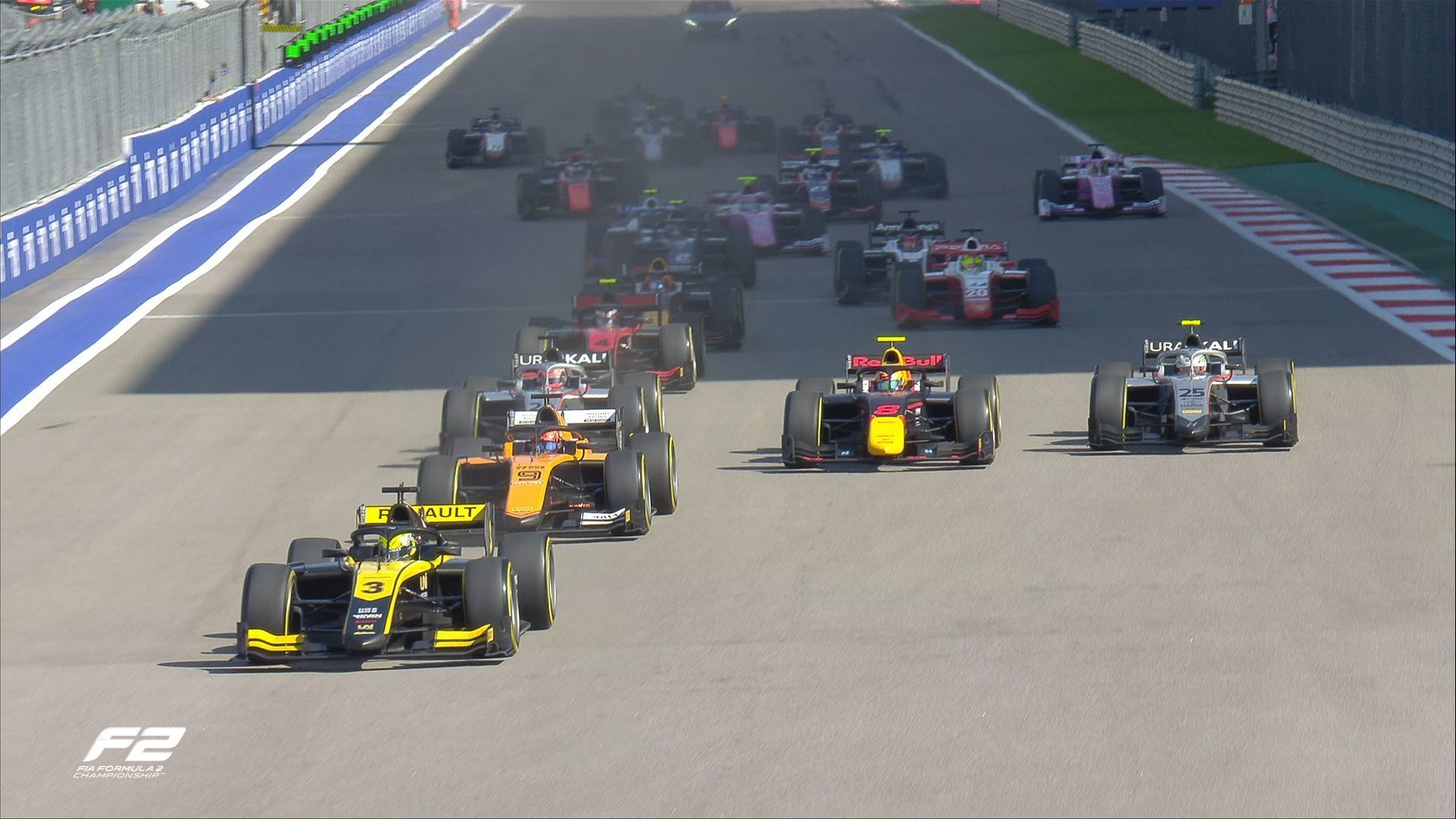 He had Carlin’s Jehan Daruvala to fend off which he managed to as Prema’s Mick Schumacher made a storming start to fourth. Hitech GP’s Luca Ghiotto was sixth with UNI-Virtuosi Racing’s Callum Ilott steadied in seventh from Carlin’s Yuki Tsunoda.

There was Virtual Safety Car deployed after a tangle between Campos’ Guilherme Samaia and HWA Racelab’s Jake Hughes after the Brazilian flew over the kerb to hit the Brit. As Zhou led the way, Aitken was the man in danger behind.

Mazepin made a quick work of him as Schumacher snatched third in a final corner move. Daruvala passed the Korean-Brit too but he used the Indian’s slipstream to retake the position at Turn 1, where the Carlin racer drifted onto the run-off.

He lost momentum as the following lap he had another drift moment where he lost to Ghiotto with Carlin teammate Yuki Tsunoda following suit. He re-joined straightway which could put him under investigation for not going to the left of the bollard.

The F2 race was soon red-flagged, though, after a heavy shunt between Aitken and Ghiotto at Turn 3 curve. The former lost a place to the latter at Turn 1 but he came back on him as they went side-by-side at Turn 3 curve at high speed.

The two touched as both Ghiotto and Aitken rammed onto the tyre barrier, even cutting across it. Both came unscathed but the Italian’s car was up in flames with the marshal coming in to douse it, while also repair the tyre barrier.

As expected, Daruvala was handed out a five seconds penalty for the Turn 1 incident, the same was handed to MP Motorsport’s Felipe Drugovich. The FIA also noted that the incident between Ghiotto and Aitken would be investigated after the race.

Even with a lengthy delay for repair job, the sprint F2 race was eventually called off with half points awarded to the Top 8 finishers. Zhou took his first win from Mazepin and Schumacher but the result post that included the drivers who crashed due to countback.

They took the result from Lap 5 with points awarded half of what they would get. As per that, Aitken kept fourth from Ghiotto despite crashing out, with Tsunoda, Ilott and Ticktum rounding out the Top 8 points scoring positions.

Piquet was ninth with Shwartzman 10th as Daruvala dropped to 11th with the time penalty – although it is unclear at the moment with the Indian probably going wide at the start of Lap 6 which is after the Lap 5 countback. Markelov slotted in 12th from ART Grand Prix pair of Christian Lundgaard and Marcus Armstrong as Trident’s Marino Sato rounded the Top 15.

#F2 RED FLAG !!!! At full speed, Aitken and Ghiotto touch and both launched into the barriers. Amazing that both drivers are okay. #RussianGP #MsportXtra pic.twitter.com/YgqeLBb4FC

The marshals are on the scene…

Both Ghiotto and Aitken's cars have been recovered#RussianGP 🇷🇺 #F2 pic.twitter.com/4hD6Riht5R