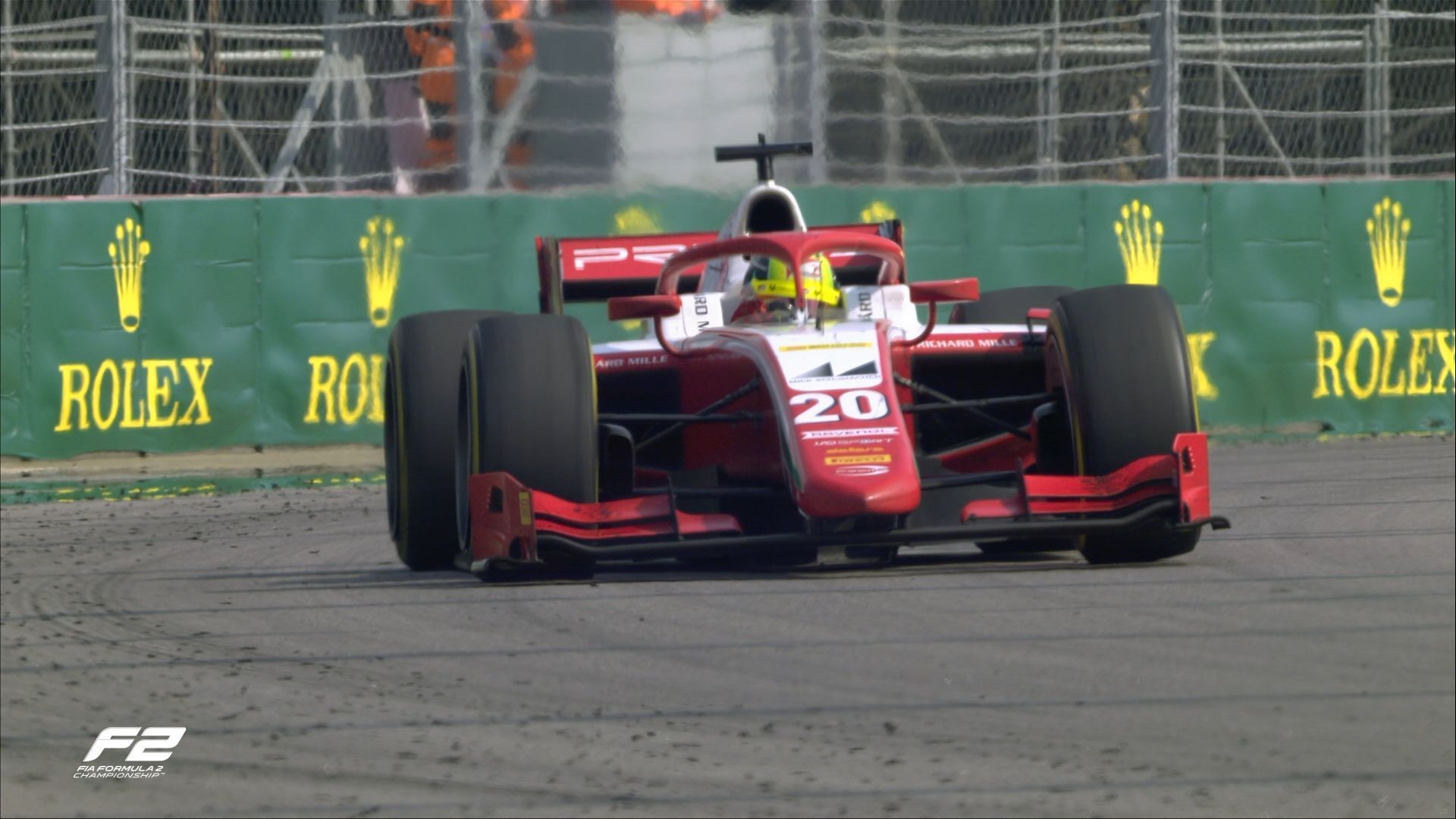 Pole-sitter Carlin’s Yuki Tsunoda held his F2 lead in feature race at Sochi as teammate Jehan Daruvala lost out to Prema’s Mick Schumacher, who drafted himself to second. UNI-Virtuosi Racing’s Callum Ilott stationed himself in fourth.

There was chaos in the mid-pack with a safety car deployed after DAMS’ Juri Vips and ART’s Christian Lundgaard stopped on track. Multiple cars came together at Turn 1, which had Trident’s Roy Nissany, MP Motorsport’s Felipe Drugovich and Charouz’s Louis Deletraz & Pedro Piquet.

It was retirement for Vips, Lundgaard, Nissany and Drugovich as safety car re-start worked well for Tsunoda with Schumacher, Daruvala behind in the Top 3. Ilott was fourth with Aitken fifth, Ghiotto sixth but Zhou lost to Mazepin for seventh.

Daruvala was the first to pit from the leaders but he lost track position and podium to Ilott as Tsunoda led from Schumacher. The alternative strategy runners had Aitken in the lead from Zhou after the Chinese managed to get back on Mazepin.

While the actual leaders were at the fag end of the Top 10, Zhou pressed on Aitken for the lead but despite multiple wheel-to-wheel attempts, the Chinese racer lost to Mazepin eventually after exiting rather slow in the corner.

While the alternative strategy drivers pitted, the F2 front-runners were bunched up close together and Schumacher made a bold switchback move on Tsunoda at Turn 1 to take the lead as the Japanese racer lost out to Ilott too on the same lap.

Behind Ghiotto passed Daruvala for fourth as the Indian started to struggle with tyres as did his teammate in front. The alternate drivers were led by Aitken in good place with Zhou, Mazepin, Shwartzman and Armstrong in the Top 10.

It wasn’t long for Shwartzman to drop out of the Top 10 as he dropped behind Armstrong and DAMS’ Dan Ticktum, who was under investigation for Turn 1 bollard move. Meanwhile, at the front, Tsunoda started to come back on Ilott in the fight for second.

The Japanese got the better of the Brit as he came under pressure from Ghiotto too. It was no stopping Schumacher, though, as he extended his F2 points advantage by winning the feature race from Tsunoda, with Ilott hanging on to third from Ghiotto.

The Italian was ever closer but just couldn’t get through as Daruvala ended up fifth from Aitken as Mazepin passed Zhou for seventh, with the Chinese F2 racer claiming reverse grid pole. The Top 10 was rounded out by Armstrong and Ticktum.

It was heartbreak for F2 contender Shwartzman as he lost more points to be 11th from debutant Jake Hughes in the HWA Racelab, leading Trident’s Marino Sato, MP Motorsport’s Giuliano Alesi and HWA Racelab’s Artem Markelov rounding the Top 15.

UPDATE: The FIA cleared Schumacher in a DRS-related alleged technical infringement for a part which was changed as a safety measure last year after an incident in Bahrain. The German was found to be using a superseded version of the DRS activation crank,
which had been updated for safety reasons during the 2019 F2 season.

The part has been in use by Schumacher since his crash in Monza and his car was only called for technical inspection in Sochi, where they found the part. Considering that the series and manufacturer is in the process of solving the issue and it not generating any performance difference, the stewards let the German go with no penalty.

Here’s the full note from the FIA: https://www.fia.com/sites/default/files/doc_28_-_2020_sochi_event_-_offence_-_car_20_-_technical_non_conformity.pdf

In another summon for Prema to have more personnel than asked for during the mandatory pit stop, the team were fined by 10,000 Euros. It was found that the team principal gestured his mechanics to alter the tyres for the pit stop.

Shwartzman was to enter first but Schumacher got in before the Russian, which meant the mechanics had to quickly changed the tyres. While team manager was on radio to state it, the team principal turned around to gesture the mechanics rather than speak on radio.

That counted team principal as part of the operational team which he is not actually part of as per the list given by Prema to the FIA. For this reason, the stewards had no choice but fine the Italian F2 outfit for breaking the International Sporting Code.