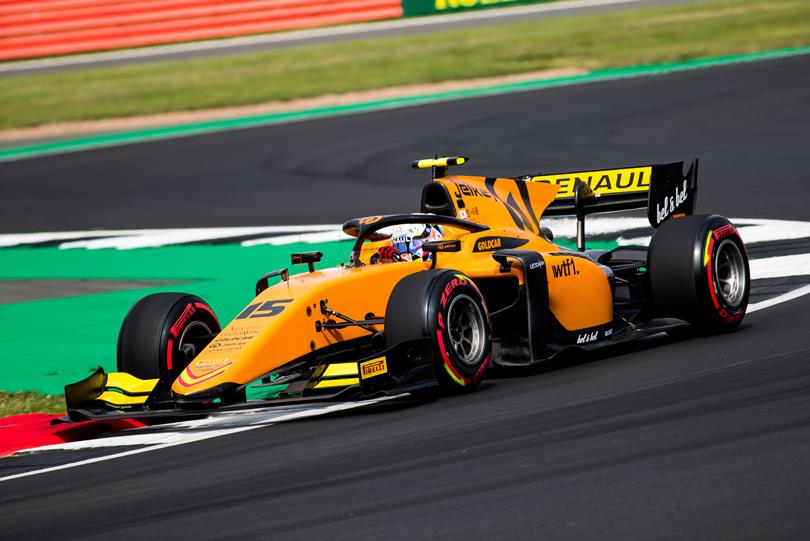 The reverse grid pole-sitter and Sauber Junior Team by Charouz’s Callum Ilott did not have a good start to F2 sprint race at Silverstone in overcast conditions as he dropped to fourth with Carlin’s Louis Deletraz leading from the battling duo.

Campos Racing’s Jack Aitken and ART Grand Prix’s Nyck de Vries were on it from Lap 1 itself with the Dutchman eventually taking track position over Aitken. Behind them, it was DAMS’ Nicholas Latifi was fifth with Carlin’s Nobuharu Matsushita in sixth.

Feature race winner UNI-Virtuosi Racing’s Luca Ghiotto gained a place to be seventh with Prema’s Mick Schumacher also gaining to be eighth ahead of Ghiotto’s teammate Guanyu Zhou. At the back, there was a collision at Turn 7 which needed a safety car.

Campos’ Arjun Maini hit the back of Trident’s Giuliano Alesi, sending the latter into a spin and a retirement with the Indian handed a drive-through penalty – not the best of returns for Maini with three races involving stewards intervention.

The re-start worked well for Deletraz but Aitken was all over the back of de Vries and eventually passed to take second with the Dutchman then having to fend off Ilott. Behind, Ghiotto gained on Matsushita and also Latifi for fifth.

The Japanese racer lost out to Schumacher and Zhou as well to drop outside the points position. The order changed when Ghiotto was forced to pit – with a speculated slow puncture – as Latifi was back in fifth from Schumacher and Zhou.

While all this was happening, Aitken closed in on Deletraz and took the F2 race lead as de Vries continued to fend off Ilott. The fight between Schumacher and Zhou continued on as Matusshita joined in and eventually passed Zhou for seventh.

At the front through, Aitken pulled out a bigger gap with a fastest lap as he eased in to score his second win of the F2 season in the sprint race with Deletraz registering his second podium as de Vries held off Ilott to keep third and extend his F2 points lead.

Contender Latifi ended up fifth with Schumacher sixth from Matsushita and Zhou in the points scoring position as MP Motorpsort’s Jordan King and Sauber Junior Team by Charouz’s Juan Manuel Correa rounded out the Top 10.

Having served his drive-through penalty, Maini climbed back up to 13th as Ghiotto fought back up to 15th after his late tyre stop with Camara – pitting for a front wing change – finishing 17th in the end.