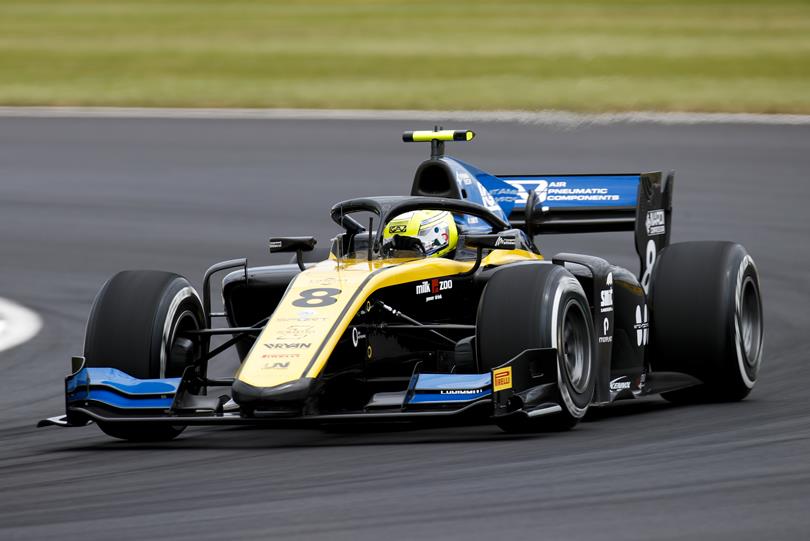 Pole-sitter and UNI-Virtuosi Racing’s Zhou lost out to teammate Ghiotto going into Turn 1 at the start of the feature F2 race at Silverstone as DAMS’ Latifi got ahead of teammate Sergio Sette Camara with Carlin’s Louis Deletraz in fifth.

BWT Arden’s Anthoine Hubert was the biggest loser after he was forced to start from pitlane, as Trident’s Dorian Boccolacci had a sorry return to F2 after stopping on track. Carlin’s Nobuharu Matsushita, meanwhile, got sixth from ART Grand Prix’s Nyck de Vries.

It was Ghiotto leading Zhou and Latifi at the front but the pit stop changed the order with Latifi gaining a place on Zhou, while he was involved in a wheel-to-wheel fight against Ghiotto for what was eventually a battle for the feature F2 race win.

Latifi hit the back of Ghiotto but they continued on. The Canadian then passed the Italian to gain track position but Ghiotto came back on Latifi to retake the place. They had ART’s Nikita Mazepin and BWT Arden’s Tatiana Calderon to get through on alternate strategy.

Once Mazepin pitted with eight laps remaining, Ghiotto assumed the race lead from Latifi and Zhou as Camara and de Vries both gained places over Deletraz and Matsushita to be fourth and fifth with the latter duo dropping in lower half of the Top 10.

The Swiss racer lost out to Campos Racing’s Jack Aitken as well as Matsushita lost to Sauber Junior Team by Charouz’s Callum Ilott inside the Top 10. The fight for 10th was close between MP Motorpsort’s Jordan King and Prema’s Mick Schumacher.

As the Top 4 remained the same, Aitken closed in on de Vries and made a move to take fifth from the Dutchman which worked well for Latifi in his title hopes. It was Ghiotto with the feature F2 race win though – his second of 2019 – as Latifi ended up second.

The Canadian managed to split the UNI-Virtuosi Racing drivers with Zhou finishing third from Camara and Aitken in the Top 5. De Vries lost points to Latifi but hung on to sixth from Deletraz with Ilott in eighth, securing a reverse grid pole.

Matsushita was ninth with King fending off Schumacher to keep 10th. A late contact between Mazepin and Campos Racing’s Arjun Maini saw the former to retire from the race but he is officially classified 16th as he completed more than 90 percent of the race.

UPDATE: Three drivers were penalised following the feature F2 race which included Alesi, Mazepin and Maini. The Frenchman was found to have exceeded the pit lane speed limit by 0.1km/h during the event and the team also had an unsafe release.

He was handed five second penalty for the former, while he was given a 10 second stop & go penalty with an addition 20 seconds which dropped to 17th behind Hubert. The Russian, meanwhile, also found guilty of speeding in the pitlane.