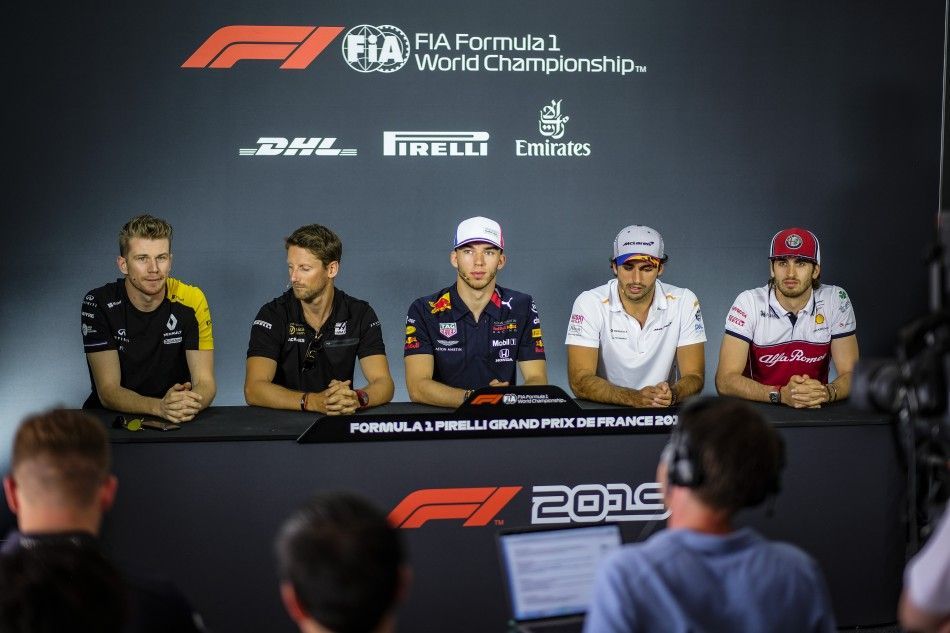 Selected F1 drivers have show sympathy towards Ferrari’s Sebastian Vettel as well as the FIA stewards after the Canadian GP debacle.

Opinions were and still are divided over the Canadian GP penalty issue of Vettel, which cost him a chance of his first F1 grand prix win in 2019. To add to his woes, Mercedes’ Lewis Hamilton took the victory to keep their winning momentum of 2019.

Post-race, there was displeasure from Vettel certainly as Hamilton too understood his frustration by gesturing to get him on top step of the podium. Since then, Ferrari dropped the idea of a direct appeal but opted for a right of review option, instead.

The hearing will take place at Paul Ricard on Friday amid the French GP weekend with the stewards to then decide if their new evidence is worth spending more time or not. While this goes on, selected F1 drivers have sympathy for both Vettel and the stewards.

No one pinned the blame on the German directly – and also no blame for Hamilton either for pushing to get by – as most felt it to be a racing incident. In addition, they defended stewards’ call as per the rule book and felt the undue comments on them is not called for.

Here’s the responses from some of the drivers in full:

“I take an example like I crossed the pit exit line in Monaco with part of my wheel, got a five second penalty and one point on my licence and Verstappen got an unsafe release in the pit lane and had a touch with Bottas and it was a five second and one point penalty because that’s what is written.

“So I think sometimes it’s hard for the stewards just to decide where they want to go, because everything is written but you never know if you’re in that case or that case. Talking of Seb, I think he’s the only one to know if he could have controlled the car better and left more room on the right hand side.

“We do not know, we do not have access to his telemetry and I think only Seb knows if he actually saw Lewis, went on the throttle on the grass and made his way fully to drive out. I won’t discuss the penalty or not, I think it’s not my job but I can only say that Seb knows if he could have left more room or not.”

McLaren’s Carlos Sainz: “I think like any other F1 fan I was disappointed when I saw a penalty, first of all because as a driver I think I would have done exactly the same as Vettel. I would just rejoin the track and try and keep first position independently of where the car is. Was it dangerous? Potentially, but what’s not dangerous in F1?

“There’s always a bit of danger, you’re always close to the walls and I think that at any point Lewis was on the real threat of having a huge accident so there was no reason to give a penalty but the rule is written and the stewards applied the rule.

“I also don’t understand all this criticism that the stewards have received over the last few weeks because they are just trying to do their job and they have a rule which they need to interpret and they need to apply and that’s what they did.

Renault’s Nico Hulkenberg: “I think my opinion and view of that is just that it’s racing, it is tough to control a car on the grass and how you then make the entry to the race track because we are simply not in full control and we don’t have normal grip.

“So for me, yeah, it seemed like a racing incident. In terms of rules, I think there are different judgements every weekend, different stewards so I don’t necessarily fear a reason why we need to tweak the rules there now.”

“If you look at Lewis, you say that maybe I could have won the race without this incident, but I think at the end of the day, when you race F1 cars at that speed, pushing to the limit these things happen and it’s part of racing so it’s difficult to draw a line but I think for me it was quite harsh to lose a victory that way.”

Alfa Romeo Racing’s Antonio Giovinazzi: “I think in the end it’s not nice to lose a race like that but I think it’s the rules, like they say and in the end the important thing is the rules are consistent at every race and to every driver, so I think this is the main thing.”

Alfa Romeo’s Kimi Raikkonen: “I watched the scene, and I would prefer not to be dragged into the whole discussion. But the way Seb slides off and returns to the track, I can’t see any offence. Unfortunately, someone else saw that.

“The fact is that if you get off the track like that, you’ll have your hands full getting the car back on the tarmac and not ending up in a wall. Space is tight, and you have all this shit on your tires. I would have understood the penalty more if Vettel had driven into someone when he came back, but like this?

“I find that strange – we were told at the beginning of the season that we drivers would get a longer leash. That’s a contradiction for me. They want to favour harder racing, and when something like that in Canada happens , it’s such a penalty. What was said there and what was done then doesn’t match for me.”

Mercedes’ Valtteri Bottas: “From a driver’s point of view honestly if you go off straight on the chicane the first thing in your mind is to get as quickly as you can back to the track without damaging the car.

“That’s what Seb did but obviously Lewis happened to be there also and I don’t know if he on purpose went more to the right or not, you never know. But the decision for the penalty, I leave that to others.”

Red Bull’s Max Verstappen: “I think why they gave him the penalty was wrong, to give the penalty I think in general if you are going to give penalties like that then why don’t you just put a wall there? I think he did everything he could to do it in the safe way.

“Of course when you go off in the lead you know that Lewis is behind only by a second or one-and-a-half, you stay on throttle and you are managing. Lewis saw him going off, when he goes through the left-hander he knows that Seb is going to come back on and then of course he knows he is going to drift wide and then he had to back off.

“If I had been Lewis I would have been on the radio as well, like ‘hey, he blocked me’, because you know it’s in the rules and there’s a possible penalty. I’m not a fan of penalties, I’ve had them myself many times, so I’ve tried to stay out of the stewards room now, I just go in and say hello! It’s maybe not good for F1 as well, but what can you do about it?”

Haas’ Kevin Magnussen: “My view is that we should think about letting us race more and get it on with it ourselves. It’s fine to have some rules, but I think we can ease it up a lot because the cars are so safe these days and the tracks are very safe also that it is not a question of safety. There is room to take a step back and let us get on with it.”