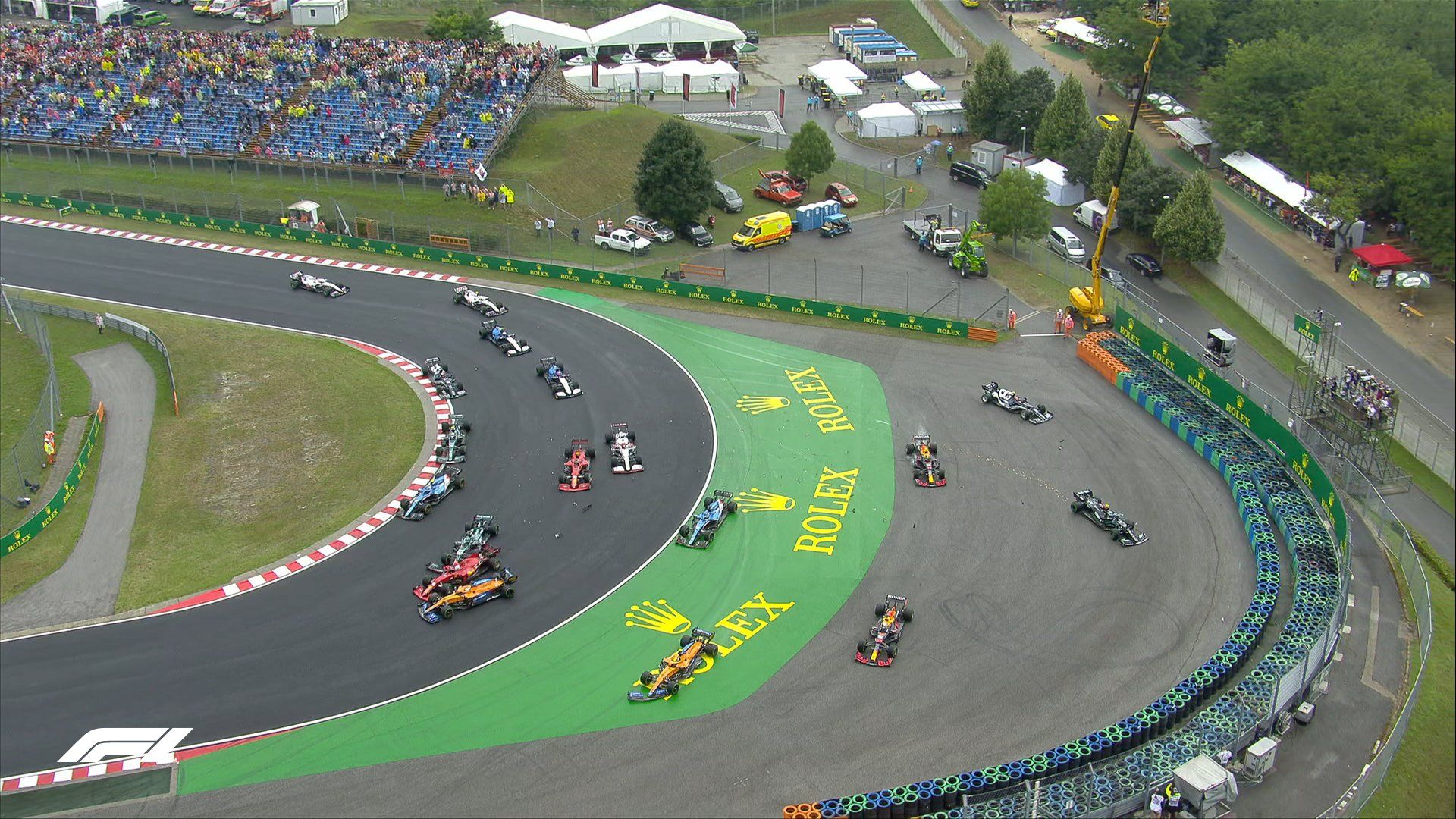 It was an eventful F1 Hungarian GP, with drivers crashing out on Lap 1 and an underdog eventually taking the win. While the net result could be said as being heartwarming, the same could not be said about the drivers who unfortunately crashed out on the first lap.

It all started with Mercedes’ Bottas locking up his front wheels going into Turn 1 and going into the back of McLaren’s Norris, as his uncontrollable car smashed into Red Bull’s Verstappen, while Bottas’ Mercedes slid into Sergio Perez’s Red Bull.

The race for Bottas, Norris and Perez ended, while Verstappen managed to continue on with host of damage, where not even a red flag could help Red Bull make enough changes to help him fight through the pack. The Finn was handed a 5-place drop for Belgium GP.

Just behind, Aston Martin’s Lance Stroll went off track to avoid the chaos and pass few cars, only to be met by Ferrari’s Charles Leclerc, who then tapped the McLaren’s Daniel Riccardo, sending both cars off track. The Canadian went charging in at Turn 1.

But there was no way he would have made the corner, thereby hitting the side of Leclerc, who spun Ricciardo around on the run-off. It ended the Canadian and Monegasque’s races, while the Australian ran with a damaged car, as Stroll was handed same penalty as Bottas.

Post-race, there were mixed emotions from all of the drivers above, including Verstappen and Ricciardo, who managed to continue on. Bottas was apologetic straightaway along with Stroll, but Norris felt a bit undone by the mistake from the Finn.

Bottas spoke with both Norris and Perez in the media pen, as he reflected on his misjudgment, while the Brit felt it was probably the case that the front-runners don’t get to run as much in dirty air, which affected the Finn more than anything.

The Red Bull F1 duo could only lament the ‘what could have been’ scenario, going from a possible double podium to just the one point. On the other incident, Stroll admitted to have gone too hot into the corner and the conditions then made it too much.

Leclerc felt disappointed with the move as he could immediately sense that Stroll had made the mistake. Ricciardo, meanwhile, thought he got through the Turn 1 chaos until the moment the Ferrari F1 driver collected him.

Bottas: “I had a bad start. I had a lot of wheel-spin off the line, so I lost the momentum. Lando got ahead of me and I was right behind him braking into Turn 1 and I think I misjudged the braking point, I wasn’t expecting to lock the wheels because it also felt like they braked quite early but I was the one behind and I was responsible in the end hitting Lando and that meant he took a lot of people off in front of him so it is not great for me and it is not great for others. Its not like I do it on purpose. Obviously, it was my mistake, I was the one coming from behind. It shows it’s not so easy in those conditions to predict but I should have braked earlier.”

Norris: I have not much to say. I am just annoyed, I guess. On Lap 1, I don’t know why does it have to happen? Why risk doing those stupid things but nothing I could do so. All of us are in Formula 1 for a reason, because we’re good drivers and we know where to brake, where to judge braking zones and so on, especially when it’s wet, especially on the first lap of the race. But obviously some misjudged it completely.

“That’s the annoying thing, you expect a little bit more from when you’re racing those top guys at the front of the field. But also they don’t race that often, they’re quite on their own, and not in the pack getting in dirty air and things as much as we are. So maybe they just don’t experience it, and they need to learn that a little bit more.”

Perez: “It’s a big shame after I was up to third. I outbraked the McLaren, I was really finding good grip already. Bottas lost the car. In the beginning, I thought it was Lando but it’s clear that Bottas just made a big mistake and took everyone out of the race. I had quite some damage and that meant I lost a lot. It’s a very bad error from Valtteri. It’s a massive blow for us as a team but we also lost the engine very likely, so not ideal really.”

Verstappen: “I mean again taken out by Mercedes, so it’s not what you want and then from there onward, I was missing my whole side of the car the whole barge board area and the floor was damaged as well. It was almost impossible to drive to be honest and I still tried my very best.”

Stroll: “It is really frustrating to have to retire so early in the race. Once the incident at the front of the field happened, I took the line to the inside to try and avoid making contact, but I locked up under braking. As soon as that happened, I knew I would not make the corner because it was so slippery and tricky out there. I did all I could to avoid contact but, unfortunately, my race was over.”

Leclerc: “I don’t know what to say, I mean, in most of incidents I can understand whenever there are different views about incidents, but I think this was very-very clear and I was in my corner and and just Lance drove into me in the middle of the corner coming out from nowhere, so its hugely frustrating because I knew it was an opportunity.

“I went quite easy at the beginning to just try and stay in my position and and make our race later on and then to finish like this is just bullshit. The only thing I saw is that he was very-very far away and then he hit me. The damage was big, I mean, I arrived at the braking point of the next corner and I basically spun straight away so uh like this.”

Ricciardo: “It was compromised at the start. For a moment, I thought I got through the chaos in Turn 1, so the start itself was good. I think I got two or three off the line and then obviously, I saw Valtteri go into Lando, who went into Max at the start and I was able to get it through that in seconds. I was okay and I honestly felt like I got it.

“And then just as I went to exit the corner on power, I saw Charles come into me and spin me around and I kind of knew already the way he came into me I was like, I think someone’s gone into him because it just we were kind of already through the corner. It seemed weird, so he then damaged his car and damaged mine, I spun and that was done and I saw the replay and Stroll went into him and then he went into me.”

Regarding the penalties, FIA F1 Race Director Michael Masi, explained the decision making of the stewards. He noted that irrespective of the conditions, it was slam dunk penalty for both Bottas and Stroll – in fact, in dry, it would have been a larger penalty. He also clarified the difference from Silverstone clash.

Masi: “That is why, even allowing for the rain, you could say possibly that if it was dry conditions and the same incident happened, it may have been a stronger penalty. But based on that, it was quite clear cut and that is why the stewards said in both decisions that both of those drivers were wholly to blame. There was no predominantly or anything else. It was point-blank their mistake.

The article was co-written by Neeladri Nag