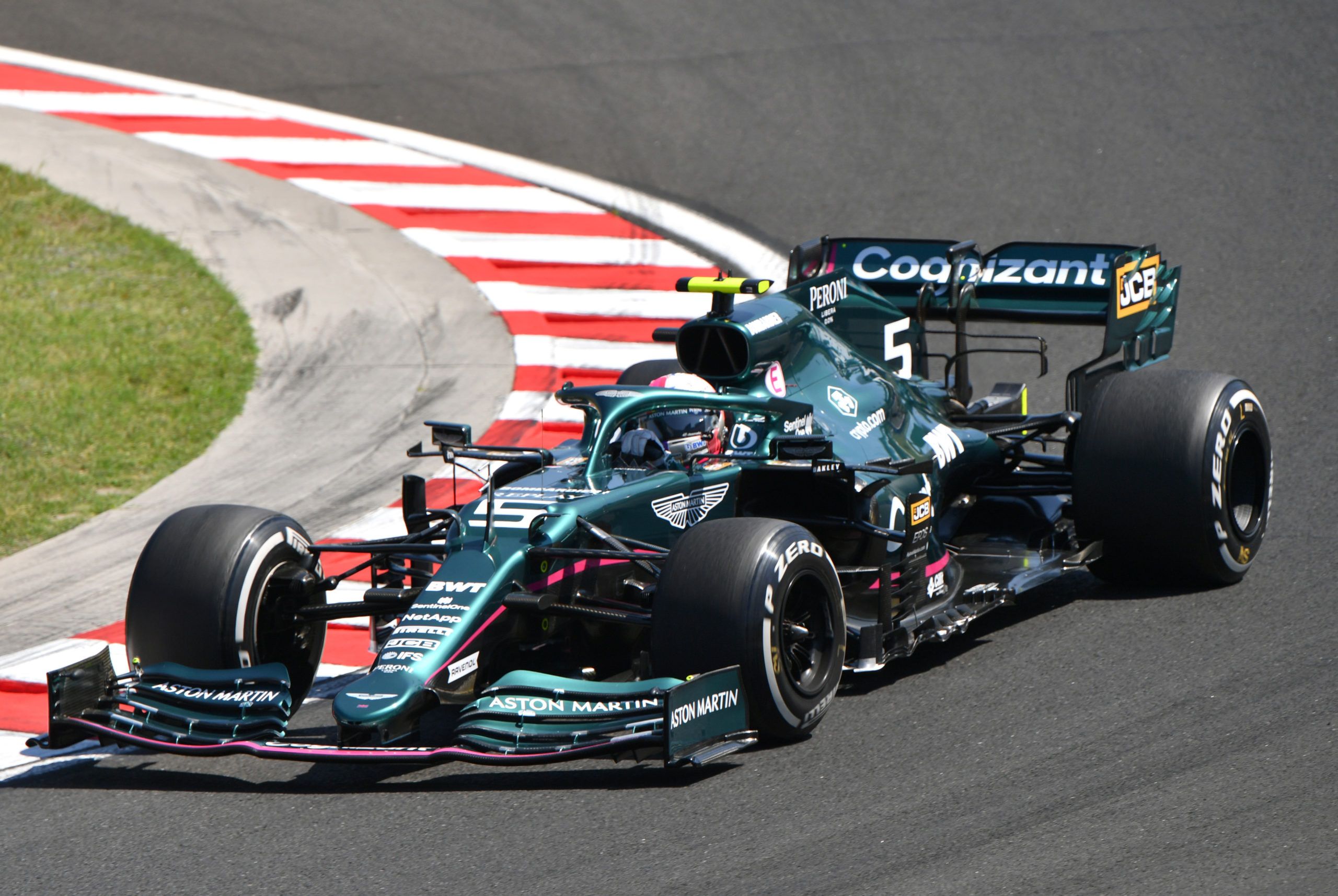 Sebastian Vettel has lost his podium place of F1 Hungarian GP after it failed to provide enough fuel sample at the end of the grand prix.

Already Vettel was summoned for a pre-race infringement, where he wore his LGBTQ+ shirt during the F1 Hungarian GP national anthem. It was not the shirt he wore but the FIA Race Directors’ note specify them not to wear any other shirt on race overalls for anthem.

He was left off with a non-racing reprimand, with same for Carlos Sainz, Lance Stroll and Valtteri Bottas. But the bigger summon came in hours after the race, with the fuel sample. As per rule, cars have to have at least one liter of fuel remaining for testing purpose.

Having stopped on track, it was certainly a bit of a worry for Vettel and Aston Martin. However, amid the celebrations of a podium finish, it was discussed as much. But the scrutineers did their job and reported it the stewards, who summoned the team.

The report stated: “After the race it was checked on car number 05 whether a 1.0 litre sample of fuel could be taken from the car. It was possible to take only a 0.3 litre sample following the procedures layed out in Article 6.6.4 of the 2021 Formula One Technical Regulations. Therefore I am referring this matter to the stewards for their consideration, as this is not in compliance with Article 6.6.2 of the 2021 Formula One Technical Regulations.”

The two other cars to stop without going into the parc ferme were Alpine’s Esteban Ocon and Williams’ George Russell, where the former stopped since he missed the initial pit entry point. The latter seemingly stopped for fuel fears as well, but looks like had enough.

Aston Martin argued that they have 1.44 liter of fuel left but they eventually weren’t able to take it out and show it, which made disqualification a certain thing. The team could still appeal the ruling, but it will be difficult to go against such a thing. 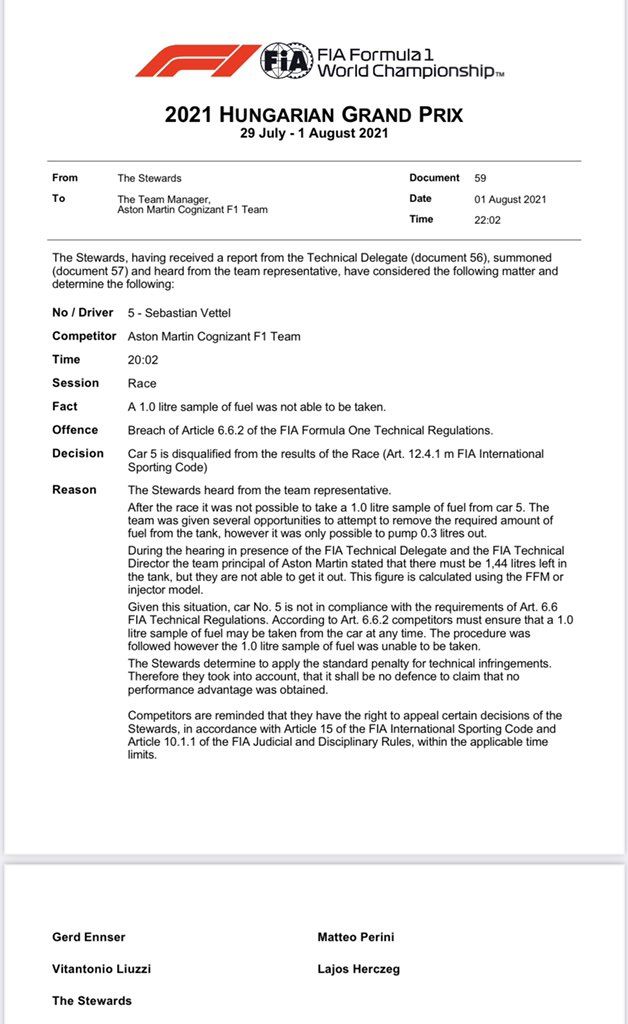 With the disqualification of Vettel, it promotes everyone one place up, with Hamilton now in second and Sainz eventually taking third. Alonso ends up fourth from Gasly, Tsunoda, Latifi, Russell, Verstappen and Raikkonen – the latter making it in the Top 10 after all. It is then only 13 finishers with Ricciardo, Schumacher and Giovinazzi.

UPDATE: Aston Martin team boss Otmar Szafnauer has stated that they intend to appeal the decision and have 96 hours to go through the data and findings. If the cases is solid enough, they will press on with the appeal, otherwise move on. 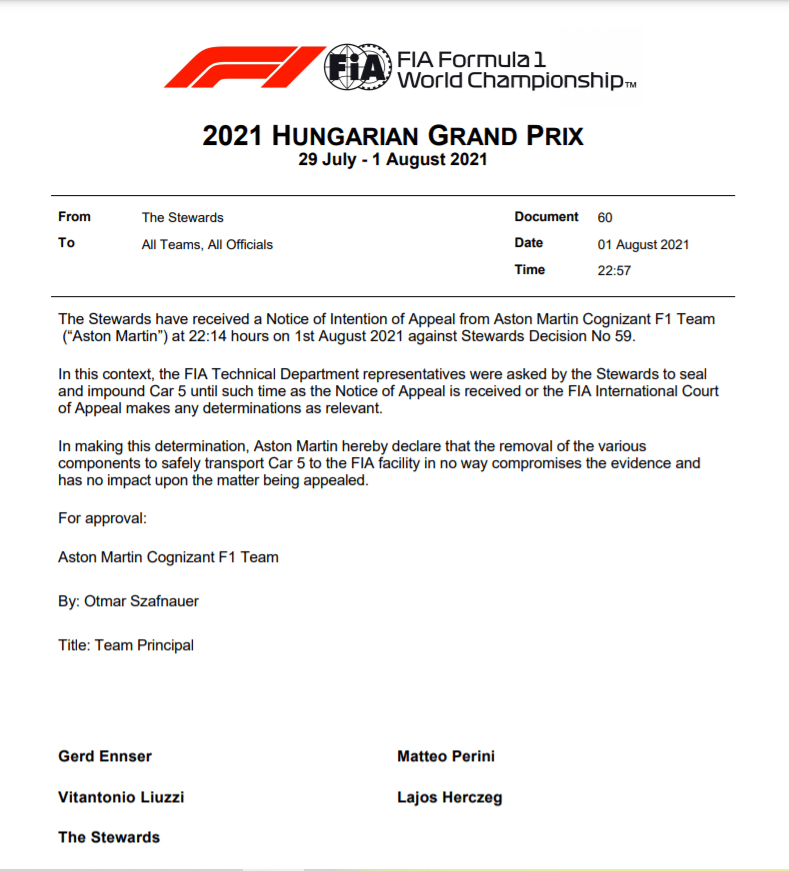 Confirmed P3 🏆!! My second podium for @ScuderiaFerrari and super happy for the entire team after all the effort we have put into this first part of the season. It comes (again) in a non-typical way….but cheers 🥂!! FORZA FERRARI
–#Carlossainz pic.twitter.com/fEcEisXDp6