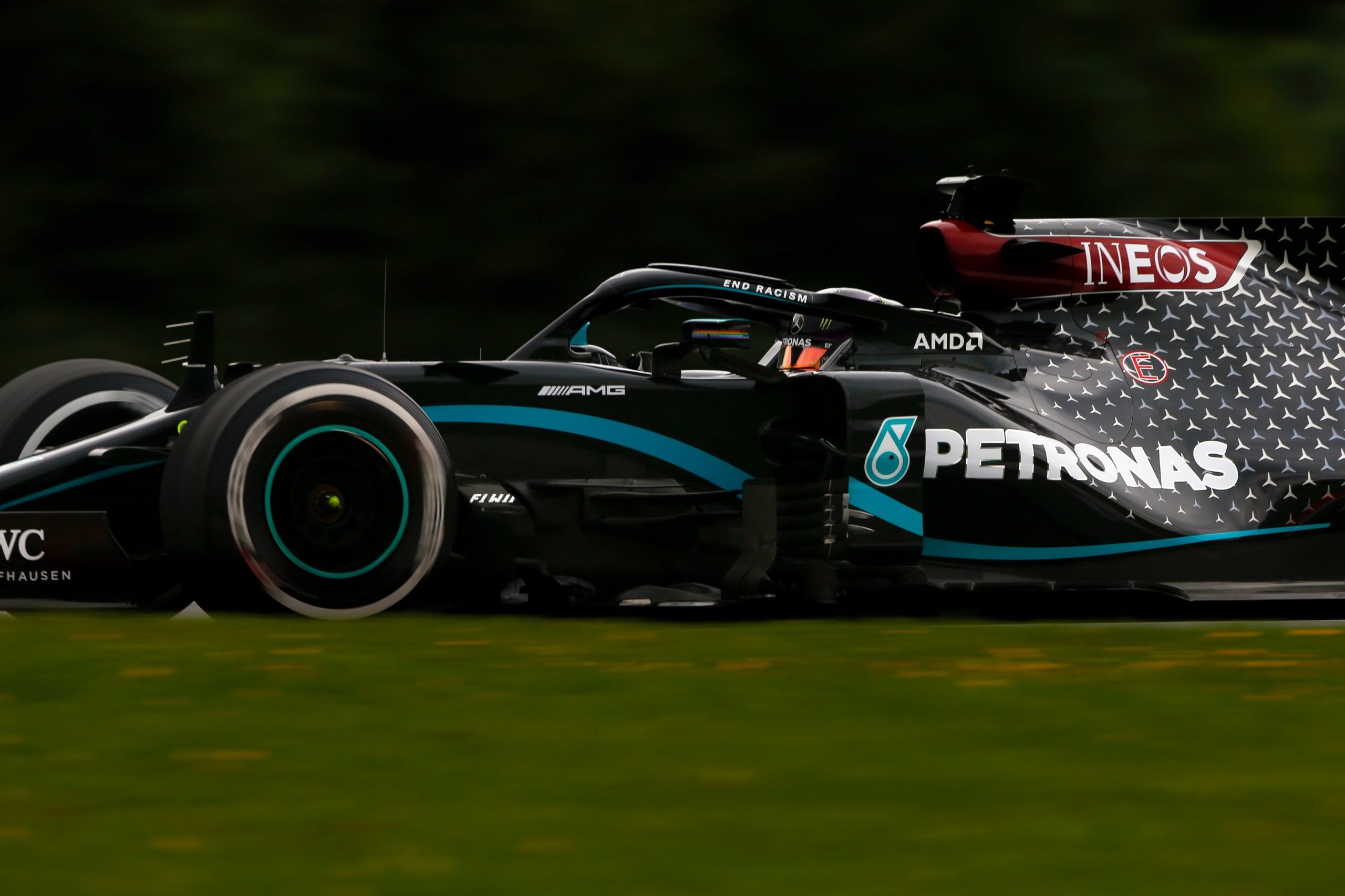 The FIA Stewards has presented its decision where they have rejected claims of Red Bull Racing for the Mercedes’ DAS to be illegal for use in 2020 F1 season.

On expected terms, Red Bull protested against Mercedes’ DAS system at the end of the FP2 of F1 Austrian GP as the 2020 season kick-started after months of wait. The team were to protest in Australia as well but had to wait eventually until Austria.

Christian Horner said Red Bull needed clarity from the FIA regarding the DAS system. While he did not straightaway answer if they have devised a system themselves but word in the paddock from various experts suggests that – which we will know in due course.

The hours of wait for a FIA decision didn’t take long to happen upon 2020 re-start as after nearly four to five hours, the decision came in, which also seems to be on expected lines that the claims of Red Bull stands rejected, even though they can still challenge it.

In a fairly detailed and long note, the FIA explained the procedure and also what took place in the video meet. Red Bull had Paul Monaghan, Adrian Newey and Jonathan Wheatley while Mercedes had James Allison, Ron Meadows, Andrew Shovlin and John Owen.

From the FIA, Nikolaz Tombazis filled in while the stewards were Vitantonio Liuzzi, Gerd Ennser, Felix Holter and Walter Jobst. The meet started with Red Bull explaining why they feel DAS doesn’t fulfill Article 3.8 (aero) and 10.2.3 (suspension).

Red Bull noted that the system is being used by Mercedes more as for tyre management and is unnecessary and extra driver input on steering wheel, when the wheel’s primary work is to steer the F1 car, which DAS doesn’t do.

Mercedes argued that DAS fulfills all the required regulations, including the safety aspect, and denounced that it isn’t something which a traditional steering wheel wouldn’t do. The FIA stewards ruled that the system can be part of the steering wheel.

While the FIA has ruled it to be legal for 2020 F1 season. It is their regulations which they have altered for 2021 and beyond to not let it be on the car. Even with the chassis in 2021 remaining the same, DAS cannot be used by Mercedes and or anyone else.

The Protest is rejected as it is not founded.

1. On July 3, 2020, after Free Practice 2 held during the Grand Prix of Austria, counting towards the 2020 FIA Formula One World Championship, Aston Martin Red Bull Racing (“Red Bull”) filed a protest against Car 44 (the “car”), owned by Mercedes‐AMG Petronas F1 Team (“Mercedes”). Red Bull claimed in its protest that the car would be not in compliance with Art 3.8 and 10.2.3 of the 2020 Formula One Technical Regulations. The parties were summoned and heard.

The following persons were present during the hearing (in person or via video conference):

On behalf of Red Bull :

On behalf of the FIA Technical Department :
‐ Nikolas Tombazis

2. The FIA Technical Department carried out an analysis of the Mercedes system and the
Stewards inspected the relevant car parts.

3. At the hearing there were no objections against the composition of the Stewards panel or against the procedure of using a video conference call in addition to a face to face hearing. The parties set out oral arguments and addressed the questions asked by the Stewards. The FIA expert was interviewed and explained his written comments.

4. At the hearing the parties referred to the documents submitted. None of the parties
submitted further evidence or initiated the hearing of additional persons or conducting further investigations.

The claims of Red Bull:

« The Mercedes DAS design breaches Articles 3.8 and 10.2.3, Aerodynamic Influence and
Suspension Geometry respectively, of the 2020 Technical Regulations via the following rationale.

Article 3.8 contains the paragraph: With the exception of the parts necessary for the adjustment described in Article 3.6.8, any car system, device or procedure which uses driver movement as a means of altering the aerodynamic characteristics of the car is prohibited.

Alteration of the static toe angle on the front axle will also change the aerodynamic characteristics of an F1 car, typically performed in set‐up and prohibited in Parc Ferme. DAS operation, which is a front axle toe angle modifier, will have a measurable aerodynamic effect on the car, whether changing the trajectory or not.

A steering system should alter a car’s trajectory when used. Observation of DAS usage in FP2 indicated deployment in a straight line with no change of trajectory, thus rendering DAS not a steering system. By observation of the video footage from FP2, use of DAS was not every lap and isolated to in/out or re‐charge laps thus it was not a system necessary for use in timed laps, rendering the primary purpose to be something other than steering.
Subsequent use in a corner cannot recover the breach as the competitor must demonstrate
compliance with the regulations at all times during an event, Article 2.7 of the Technical Regulations. The Technical Regulations do allow multiple steering systems. RBR contend a steering system should have the primary purpose of being able to steer the car. A secondary system that is, on its own, incapable of steering the car is an unnecessary system.

A key discussion point must be why have Mercedes added the DAS system? As mentioned above, judging by practice today, it appearsto be used on out and slow laps as a means of adjusting tyre temperature, i.e. its primary purpose is not as a steering system but rather a tyre temperature management system.

In conclusion, DAS is an unnecessary,separate system requiring a separate driver input and using components which are separate in their effect to the main steering system breaching Articles 3.8 and 10.2.3 »

« DAS is not a suspension system because:

1. It is mounted on the fully sprung side of the car and plays no role in suspending the car, or insulating the car from the undulations on the road surface

2. It is mounted fully on the power assisted steering rack.

3. All it is capable of doing –just like a traditional steering system –is to alter the alignment of the front wheels about the kingpin axis by changing the position of the outboard ends of the steering rack

4. It cannot change the length of any of the suspension members DAS is a steering system because:

1. Actuating conventional steering moves the wheels in the same direction

2. Actuating DAS moves the wheels in the opposite direction – it is like changing the static toe angle of the steering system

3. Conventional steering often also changes the toe – but it does so as a function of steering angle

4. Changing the toe angle of the wheels changes the forces on the front tyres.

5. Any driver knows that changing the toe makes the car change its steer response (from lazy to nervous) – changing this value while the car is manoeuvring (in corners or on the straights) will cause the car to steer.

6. This is because under all track conditions (except the purely hypothetical situation of zero wind and geometrically perfect track), the difference in load on the tyres from left to right will cause the car to steer when the toe angle is changed.

7. DAS is a steering system that allows the driver to optimize the toe, and therefore the steer response of the car during a run instead of being confined to changing only from run to run.

DAS is a legal steering system because:

1. It fully respects Article 1.2 and 10.4.1 in that it only allows for the alignment of two wheels

2. It is not electronically controlled

3. It passes all the geometrical and safety requirements of 10.4

5. We have fully complied with our obligations under Art 2.5 to describe the novel system.

Conclusions of the Stewards:

1. Article 3.8 (Aerodynamic Influence): the position of the front wheels affects the aerodynamic performance of the car, and is controlled by the driver. An exception is de facto made for steering, otherwise all cars would be illegal. If DAS fell outside this exception, it would be illegal.

2. Article 10.1.2, which states that the front suspension system must be so arranged that its response results only from changes in load applied to the front wheels. Again there is an implicit exception for steering. So if DAS was not part of the steering system, it would fall foul of this regulation too.

4. Articles 10.2.2 and 10.2.3, related to adjustments of the suspension whilst the car is in motion or powered suspension systems.

5. Article 34.6 of the Sporting Regulations: this forbids an adjustment of suspension in parc fermé. It is, for example, not permitted to adjust the toe angle by mechanically adjusting the length of the steering arms during parc fermé. Clearly (again) steering is a de facto exception, and if DAS was not considered to be part of it then it would fall foul of this Article.

The Stewards decide that DAS is a part of the Steering system.

1. Article 1.2 states that “at least two (wheels) are used for steering” and Article 10.4.1 states that “the re‐alignment of more than two wheels is not permitted”. These two articles hence limit the number of steered wheels to 2, but crucially no reference is made on that realignment being of a single degree of freedom (i.e. the LH wheel having a single function of position in relation to the RH wheel).

2. There is no direct definition of steering, but one can plausibly suggest that:

a. Steering changes the direction of the car

b. During steering the steered wheels rotate about a vertical or near‐vertical axis to change their direction, and hence steer the car.

3. Changes in toe affect the direction of the car in two ways:

a. If toe changes in a corner, the effect will be asymmetric and hence the trajectory of the car will change

b. If the driver applies a steering wheel (rotational) input, the response of the car will depend on the toe angle of the wheels, hence the fore‐aft position of the DAS will have a direct steering effect.

Because of the above arguments, the Stewards believe that DAS can be legitimately considered to be part of the car’s steering system, and hence that it should be subjected to the same implicit or explicit regulations as the conventional steering system. The Stewards decide that DAS is not in breach of the suspension‐related regulations.

1. Fundamentally suspension has the purpose to insulate the sprung mass of the car from the undulations in the track surface. The alignment of each front wheel (i.e. its steering angle) has an effect on the suspension, but this is incidental. Article 10.2.1 specifically deals with this matter, stating that “With the steering wheel fixed, the position of each wheel centre…etc.”. This Article essentially separates the function of the suspension and that of the steering. It is also clear that the steering wheel position is in this case a two‐degree‐of‐freedom system.

2. Consequentially, the legality of the DAS system is identical to the conventional steering system in terms of the legality under Articles 10.1.2, 10.2.2 and 10.2.3.

Competitors are reminded that they have the right to appeal certain decisions of the Stewards, in accordance with Article 15 of the FIA International Sporting Code and Article 10.1.1 of the FIA Judicial and Disciplinary Rules, within the applicable time limits.