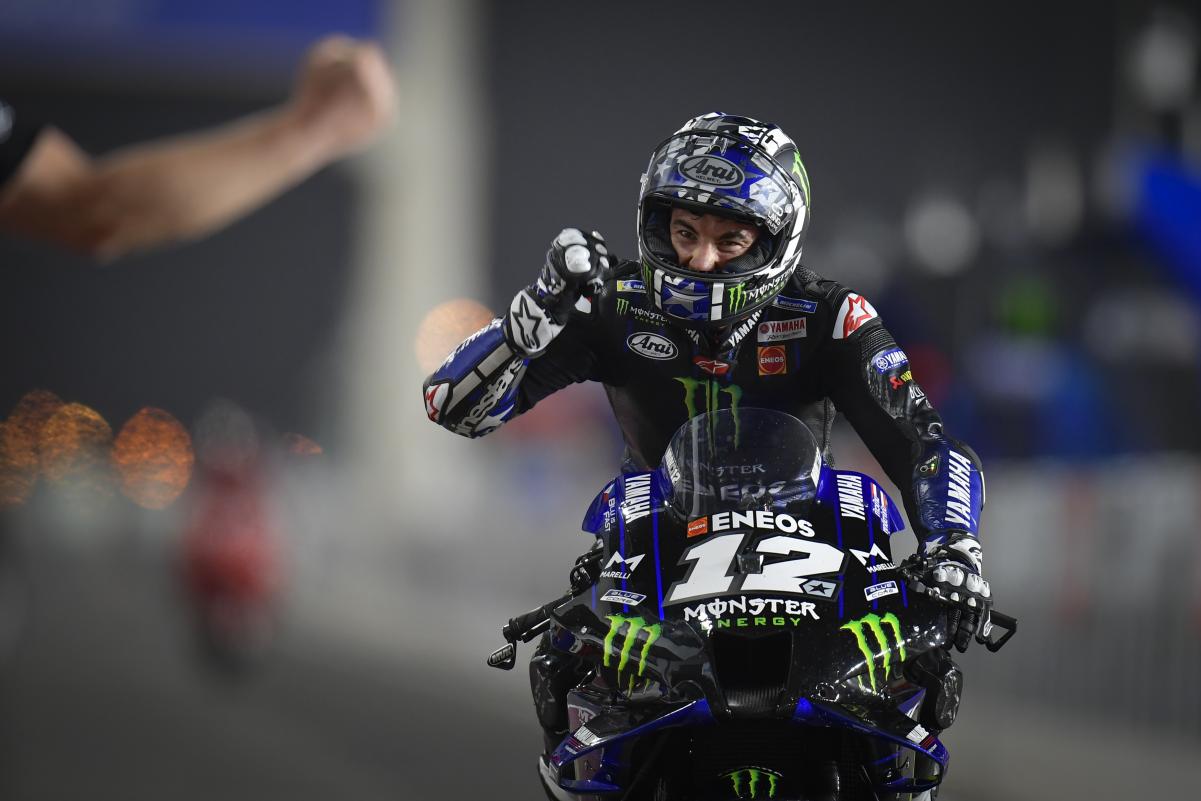 Maverick Vinales absolutely killed it in Qatar MotoGP race, after passing multiple riders to secure a fine win over the Ducati pair.

It wasn’t the start Yamaha’s Vinales had hoped for in Qatar MotoGP race, where he dropped down the order on Lap 1 as horrors of 2020 kicked-in immediately. He tucked behind his new teammate Fabio Quartararo in a similar position, where had to fight back through.

This time it was different, though, as Vinales kept himself inside the Top 10 and in touch with the leading group. As Quartararo closed in on the riders ahead, the Spaniard stayed in his slipstream and gained places too, before eventually passing his teammate too.

Post that is where he showed his new-found aggression, while passing Ducati’s Jack Miller, Pramac’s Johann Zarco and eventually Qatar MotoGP racer leader Francesco Bagnaia abode the Ducati. He was able to pull away almost immediately and secure a fine win.

“I was quite comfortable behind Fabio as I could see the Ducati’s were not going away,” said Vinales to media including MotoGP, The Race, Crash, Motorsport Network and more. “Fabio was closing the gap and I was trying to save as much tyre as possible, especially the rear tyre.

“And with the slipstream off Fabio we were closing the gap, so I didn’t take too many risks, only when I saw that I could have the chance to push and overtake Fabio, Johann and Pecco was when I pushed.  These six or seven laps I pushed and I think we managed quite well to make fast laps, and even when we overtake we were very fast.

“And after that I just tried to manage the tyre. Honestly we worked really well this weekend and in the FP4 with the used tyre and we understand when the tyre is used how to get grip with it,” summed up Vinales, as he added about its holeshot device which isn’t as effective as some of his MotoGP rivals.

“It’s something we are repeating and repeating and I’m trying to start every practice to at least the best Yamaha,” said Vinales. “Next race we’re going to try to make an improvement, it’s very important. And for the rest of the season for sure, Yamaha is working very hard to bring a device to start better.

“The corner speed, the turning and this is this is very important for us to have in the pocket because to fight the Suzuki or the other manufacturers we need to have this kind of corner speed,” Vinales added, while noting about speaking with his team about the changes he can bring, in terms of mentality and more.

“What I try to do is to stay calm,” Vinales started. “That’s the most important thing for me. I need to find people around me who help me find stability. I’ve talked a lot with Maio [Meregalli] and Lin [Jarvis], and they understand that sometimes it’s difficult but they also understand what I need to do to be fast.

“Every year we understand and learn a little bit more. Every year I give my maximum to be as fast as possible and to be at the top. We’ve changed our mentality. We needed to be stronger on overtakes, and it’s something we were missing last year. I felt like I had great potential and great rhythm but I got stuck a lot.

“But in Qatar, I felt like I had many points to overtake where we are fast. I was much more aggressive than in the previous races, and we need to keep working like that. We need to push and push. This is the only way,” Vinales explained, as he then opened up on the value of having Cal Crutchlow in the team, who has similar riding style to him.

“We ride very similar,” Vinales said. “I was quite surprised because on the last day of testing I tried his bike and it fits fantastic for me. So, it helped me a lot to stay concentrated on racing and not concentrate on trying [new] things and this is a totally different mentality from last year because sometimes we needed to test many things. I wish everything works, but normally nothing works when you try on a race weekend.

“And this looks like it gives us a lot of calm because we know when Cal will says something is good, it will be good. And it’s something I believe in, and for sure now in the next days Cal will have another test and we will work especially on the power delivery of the bike because sometime it’s too much and we need to work very strong on that. But it’s just the feeling, the feedback is very similar and this is very important,” Vinales summed up.

Here’s Valentino Rossi and Frano Morbidelli on their misery