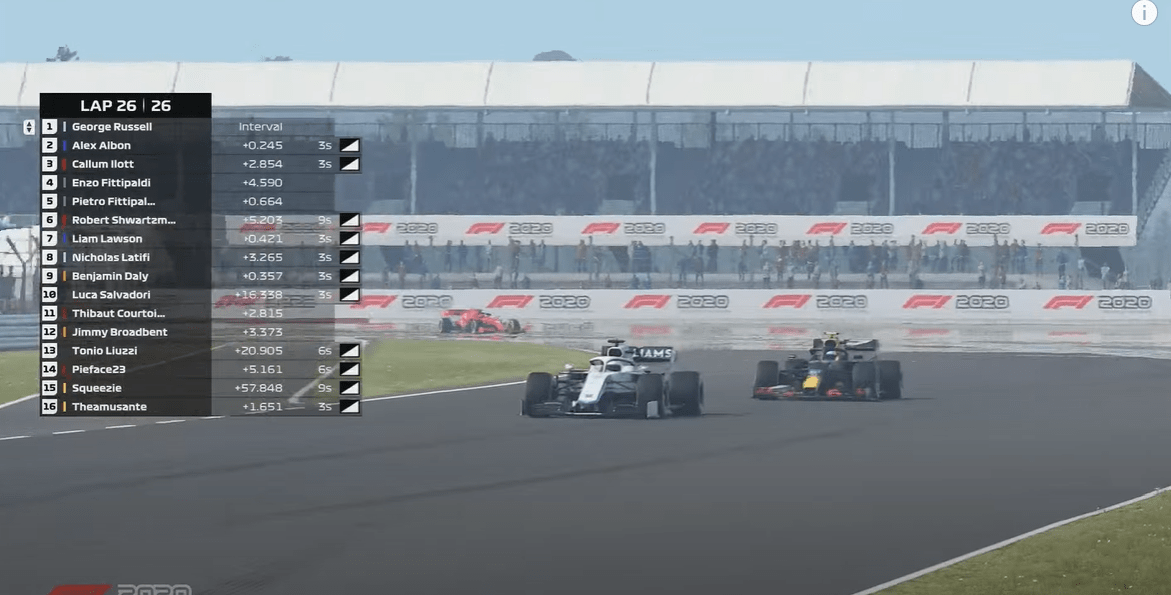 George Russell returned to F1 Virtual GP with a win after Alexander Albon was penalised having ended up P1 at Silverstone.

After nine F1 teams took part in first round at Red Bull Ring, the grid was down to eight for the second with Mercedes opting out for the Silverstone race. Among the current grid drivers, Nicholas Latifi continued on as George Russell joined in finally.

With Leigh on pole, it was Ferrari’s Callum Ilott having a solid start to lead the British F1 Virtual GP as Red Bull’s Alexander Albon lost second to Alfa Romeo’s Thibaut Courtois and Williams’ Russell in the opening few laps, to drop to fourth.

As Ilott led the way, Russell steadied in second with Albon taking third after Courtois dropped at the fag end of the Top 10. The Fittipaldi brothers slotted in fourth and fifth with Pietro leading Enzo in the Haas car, whereas fight for sixth continued behind.

It was Ferrari’s Robert Shwartzman ahead getting the better of McLaren’s Benjamin Daly, who lost to Red Bull’s Liam Lawson too. All this while, Williams’ Nicholas Latifi made his way up into the Top 10 after starting from back of the field.

Albon repassed Russell as their alternate strategy helped them to get ahead of Ilott to lead the British F1 Virtual GP. Even though the Thai racer led the way for most part, it was fruitless as he had a penalty against his name, while the Brit didn’t.

He didn’t wish to win that way as Russell passed him with two laps to go but Albon got him again to win the British F1 Virtual GP on the road. However, with the penalty applied, the Williams driver took the victory upon his return to ESports racing.

Ilott had a penalty too but kept third as P Fittipaldi got the better of his brother to be fourth and fifth, as Lawson was sixth from Latifi, Shwartzman, Daly and AlphaTauri’s Luca Salvadori in the Top 10 – it included penalties for several of the racers.

The rest of the field had Courtois in 11th from McLaren’s Jimmy Broadbent, AlphaTauri’s Vitantonio Liuzzi, Alfa Romeo’s Pieface23 and Alpine’s Squeezie & Theamusante.

All to play for as the #VirtualGP heads to Brazil for Round 3 next Sunday 🇧🇷🎮 #F1 pic.twitter.com/uKYTiKECbj

Here’s how Round 1 of F1 Virtual GP went