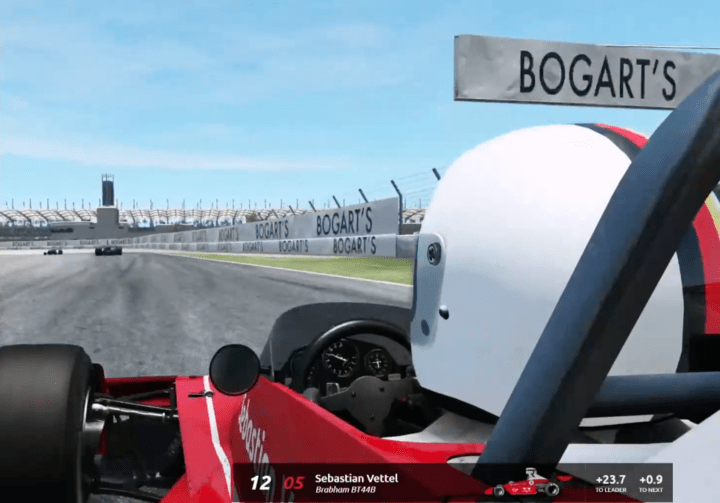 Formula E had its second round in the Race at Home Challenge with Maximilian Gunther winning as All-Star ESports Battle had Sebastian Vettel which continued along with Veloce Not The GP.

The second Formula E Race at Home Challenge round took place at a new Electric Dock circuit. They had two races, where one was the Challenge Grid with a mix of ESports racers and real racers along with some Youtube personalities.

The other one was the actual Formula E drivers as they used the rFactor 2 game. The Challenge Grid saw GEOX Dragon’s Peyo Peev on pole as he led the way for the most part to eventually win Round 2 of the series at a new circuit.

It wasn’t a great start for Vandoorne as he dropped to fourth with Gunther leading from Lotterer and Nissan’s Oliver Rowland, who even cleared fourth placed Mahindra Racing’s Pascal Wehrlein. There was further drama with both Rowland and Lotterer having issues.

They dropped down as Gunther led the way with Wehrlein recovering to second from Vandoorne but the Belgian lost out again to drop to sixth as Envision Virgin’s Robin Frijns climbing up to third. The Dutchman gained a place after Wehrlein made a mistake.

The German hit the wall to drop behind Frijns and GEOX Dragon’s Nico Mueller as Wehrlein came in trouble with Porsche’s Neel Jani pressured him. Gunther, meanwhile, made it two in a row to win as Frijns and Mueller made it in the Top 3 and on the podium.

Wehrlein dropped to 10th after a last lap hit from DS Techeetah’s Jean-Eric Vergne, who finished ninth behind Jaguar Racing’s James Calado. Ahead of them were Jani in fourth with Vandoorne fifth from NIO’s Oliver Turvey and Mercedes’ Nyck de Vries.

In the All-Star ESports Battle, there was a revamp in all areas, after last week concluded the first championship. Along with this revamp came teams, new cars, and a complete schedule shuffle, which saw a race with only pro drivers kick off the events.

At the Sepang circuit in rFactor 2, Aston Martin’s Chris Buncombe took pole in the first Pro race, but was unable to convert that into a win after he spun, and relinquished the lead to Mercedes’ Esteban Gutierrez, who took the win from Buncombe and Esteban Guerrieri.

Immediately following this, the sim racers were given the opportunity to shine, in a race with identical machines, dubbed ‘Formula Race’ cars. In the qualifying session, Simoncic was the one to beat, and in the race itself, his rank was much the same, as he led Bono Huis and Mroczek to the line.

With the current drivers having run the first of their races, the Legends race was next, and, perhaps unsurprisingly, it was Jenson Button who got pole, but after what was a chaotic start, he dropped back as Juan Pablo Montoya seized the moment to take the lead and ultimately win with the Brit fighting through to second and Emmanuele Pirro third.

The biggest surprise was the debut of Ferrari’s Sebastian Vettel, who had his sim installed finally and get on with the ESports world. The German qualified 15th but dropped back at the start as he then climbed back up to end up a modest 16th.

With the first round of races behind, the reverse races came next, and the first of these was, once again, a race between the Pro drivers where Mercedes’ Anthony Davidson took pole and eventually took the victory beating Bruno Spengler and Gabriel Chaves.

The sim racers were next, which started with Zwiers in the lead but it was Terzic winning from Kevin Siggy and Zwiers. The session ended with Legends Trophy, where Adrian Fernandez started on pole and won from Darren Turner and Pirro as Vettel was 11th.

Here’s where you can watch it in full: https://www.youtube.com/watch?v=mPzyC157k7Q

Veloce Not The GP:

Returning for the first time in a month, Veloce’s ‘Not the GP’ held two races at the Hockenheim on F1 2019, the first of which had Williams’ Nicholas Latifi on pole but Toro Rosso’s Cem Bolukbasi took the win despite losing to Ferrari’s Charles Leclerc on track.

Leclerc had a penalty which dropped him to second after a quality fight against Bolukbasi. Third place went to Williams’ TRL Limitless. The second race saw the whole field reversed with Alfa Romeo Racing’s Antonio Giovinazzi on pole.

It was mess ahead as Leclerc finished first on-track again but dropped back due to penalty after a massive fight against TRL Limitless, who scored the win. With Leclerc in second, it was his Ferrari teammate and content creator Benjamin Daly in third.

Here’s you can watch it in full: https://www.youtube.com/watch?v=oYvBhlqwKXw&feature=youtu.be

Here’s how all ESports went during last weekend