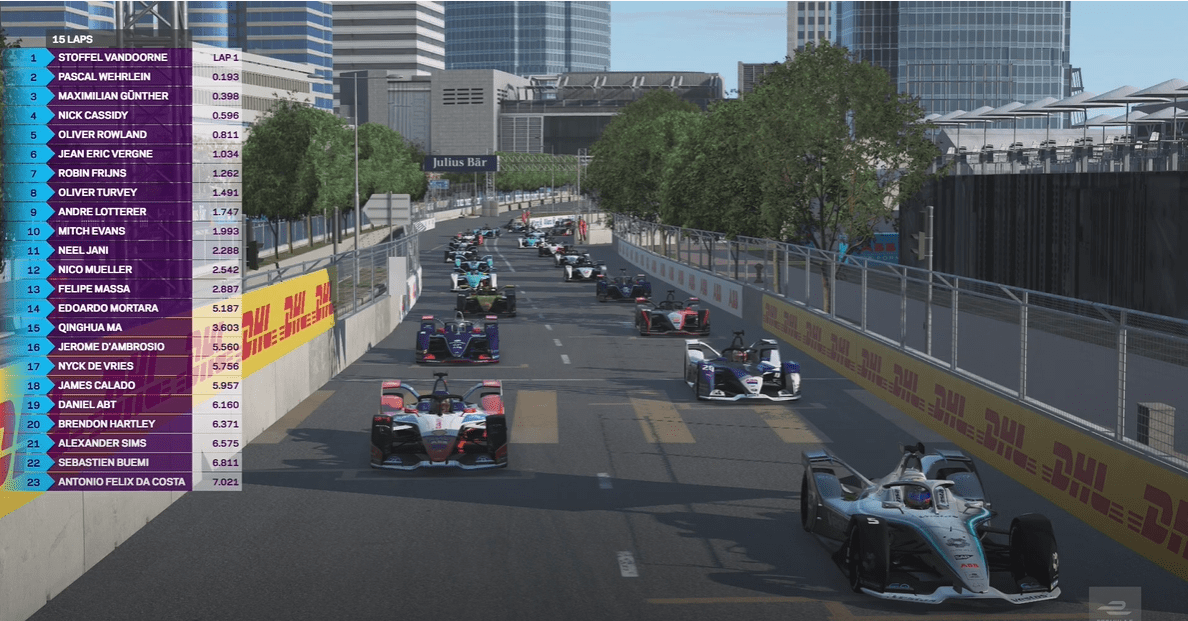 Formula E had its first round in the Race at Home Challenge with Maximilian Gunther winning as All-Star ESports Battle continued on for another weekend.

The first Formula E Race at Home Challenge round took place at Hong Kong after a trial round in Monaco. They had two races, where one was the Challenge Grid, where the grid saw a mix of sim racers and real racers along with some Youtube personalities.

The other one was the actual Formula E drivers as they used the rFactor 2 game. The Challenge Grid saw NIO’s Petar Brljak on pole as he led the way for the most part until the final lap when Porsche’s Joshua Rogers passed him to win Round 1 of the series.

Vandoorne made a good start to lead the race as Gunther moved to second from Envision Virgin’s Nick Cassidy, while Wehrlein dropped to fifth due to a collision. There was a miss from the game as the Belgian dropped to fifth with the German taking the lead.

Cassidy moved to second with Wehrlein third and Envision Virgin’s Robin Frijns fourth. It was a straight forward end as Gunther won the Round 1 of Formula E Race at Home Challenge at Hong Kong ahead of the Cassidy and Wehrlein.

Frijns held on to fourth with Vandoorne fifth ahead of the battling duo of Nissan’s Oliver Rowland and NIO’s Oliver Turvey as Venturi’s Felipe Massa, Mahindra’s Jerome D’Ambrosio and BMW Andretti’s Alexander Sims rounded out the Top 10 positions.

Here’s where you can watch the full Formula Race at Home Challenge:

Outside of Formula E, the All-star ESports Battle was in order for yet another weekend, with both the Legends Trophy and the All-Star Cup taking place on rFactor2 at a virtual version of the Nurburgring sprint layout – another legendary circuit.

The first competitive race was the Legends Trophy, in which 2009 F1 champion Jenson Button fended off Juan Pablo Montoya and Jan Magnussen to win as Andy Priaulx continued his string of good results with a fourth place, one position ahead of Tonio Luizzi.

Michel Jourdain, Darren Turner, Emanuele Pirro, Adrian Fernandez, and David Brabham rounded out the top ten. Following this, there were numerous qualifying races for the All-Star Cup. The top five of each were to partake in the final.

With the grid for that set, the Legends Trophy’s reverse grid race was next on the schedule, with Peter Solberg starting on pole. The Norwegian led into into turn one, and pulled out a large lead over the rest of the All-Star ESports Battle competition.

Leader of race one, Button, got involved in an incident with Pirro and a few others. This, plus a spin, put a pause on his charge for the lead. Meanwhile, at the front, Dario Franchitti passed Solberg, who went to take his position back, and accidentally punted his rival off.

Solberg went on, battling Montoya, but he spun on the last lap as the Colombian went on to win on-track. However, following a seemingly inexplicable series of disqualifications and penalties, the pole-sitter was handed the win.

He led Helio Castroneves and Franchitti, with Turner and Pirro rounding out the top 5. The conclusion of the reverse grid led to the start of the All-Star Cup race, which had the event’s regular and front-runner Erhan Jajovski on pole.

It was a somewhat uneventful race at the front, with Jajovski taking the win, ahead of Kevin Siggy and Wisniewski – who battled in the closing stages. The win gave Jajovski the title as Stoffel Vandoorne was fourth ahead of Brzezinski, and Maxmilian Gunther.

Here’s where you can watch it: https://www.youtube.com/watch?v=2iEohVu4ifE

Here’s how it was last weekend