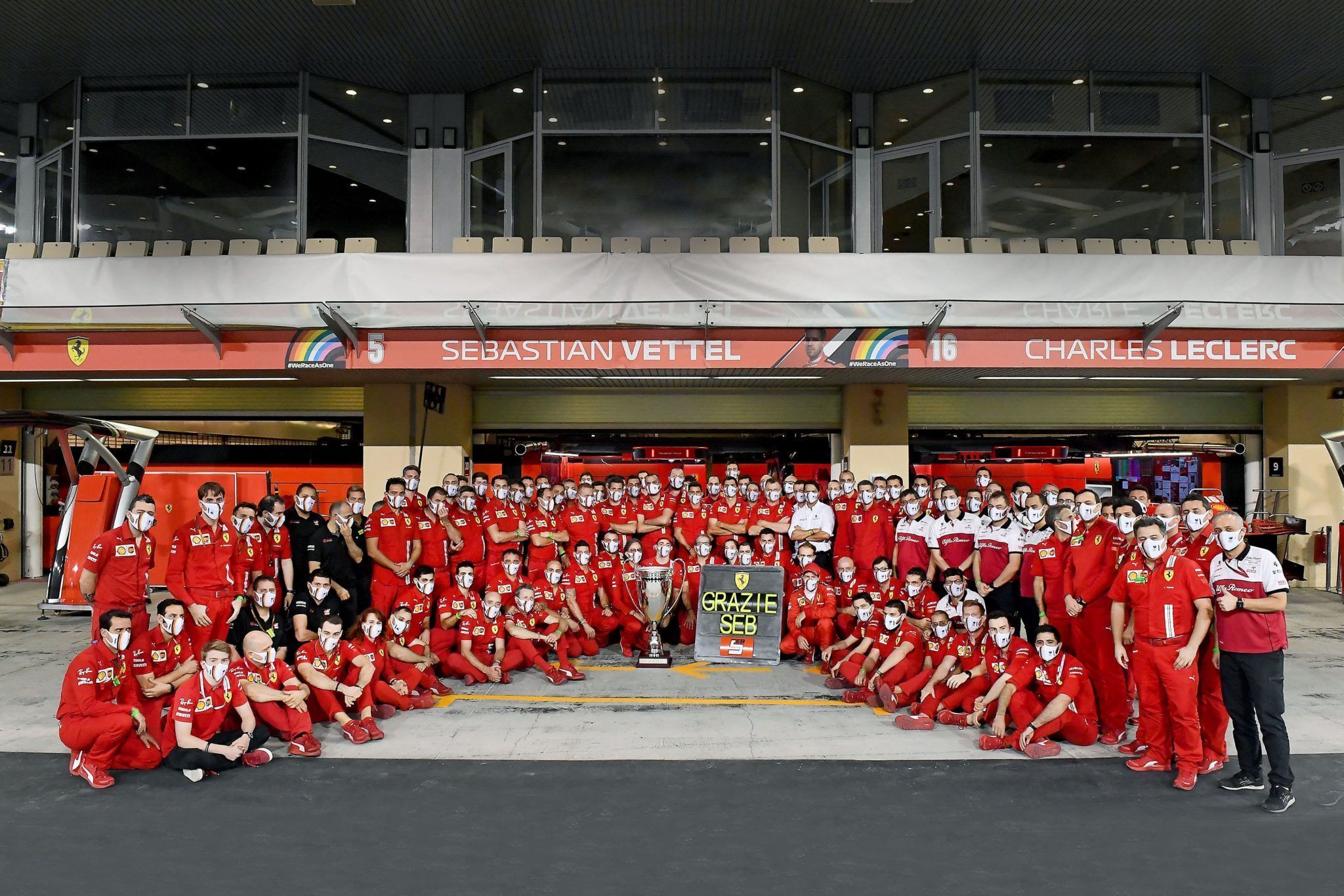 Sebastian Vettel sung to Ferrari after the F1 Abu Dhabi GP – his last race with the team – and said that he’ll remember their commemorative gestures.

Prior to the commencement of the F1 race, Ferrari mechanics stood out in the pit lane as Vettel exited the garage for the final time in what was one example of the pageantry surrounding the German’s last of 118 starts with the Italian outfit.

The four-time F1 champion returned the favor to the team after the race, by singing a modified version of classic Italian song ‘Azzurro’. It was a serenading that harkened back to those which the 33-year-old once performed when he would achieve frequent race wins with the team.

With lyrics re-written (translation can be found below), so as to be specific to Ferrari, Vettel went as far as to take a lyrical sheet in the car with him for the race, which he read out to the tune of the 1968 song over the team radio.

Within the song, Vettel expressed great appreciation for those who have surrounded him in his time at Ferrari. In post-race interviews, the 53-time winner – who reached the top step of the podium 14 times with Ferrari in his seven championship bids – promised to never forget his team’s gestures.

He refrained, though, from promising the same of the race, which saw him finish 14th – one place behind his teammate Charles Leclerc. “It’s been a special day, I will remember it,” said Vettel to TV media. “I won’t remember the race much, but I will remember the gestures of the mechanics, the garage – the guys I spent six years of my life with.

“I will miss them, but equally, I look forward to next season,” said Vettel, who also said that he’ll miss his teammate of two years, Charles Leclerc.  “I think I will miss him. He’s given me a headache here or there, and we are at very different stages of our lives, but he’s a good kid and he’ll go a long way. I hope he gets the car he deserves.”

Post-race, Vettel and Leclerc swapped helmets as they bid farewell to each other, with the former also walking through the Yas Marina paddock to hand Heineken beers to Ferrari crew members as the night drew to a close. He was spotted delivering the drinks during Sky Sports’ post-race coverage (photo below).

Leclerc was sporting a ‘Danke Seb’ helmet all-weekend as a gesture for Vettel. In the helmet exchange, the German even wrote a message for the Monegasque, which could be visible in the photo shared by his manager (photo below)

Elsewhere, Vettel’s auction of his ‘Diversity’ helmet also ended on Sunday, after going onto the block on December 3. The helmet, featuring LGBTQ+ pride colors in place of his traditional German flag design as stripes, and throngs of drawn people lining its bottom, sold for a whopping 225,000 Euros, with all proceeds going to disadvantaged children in Togo and Uganda.

Spotted in the @ymcofficial paddock: Sebastian Vettel handing out beers to the @ScuderiaFerrari team members after the Abu Dhabi Grand Prix:#F1 #AbuDhabiGP pic.twitter.com/cCnVkR10UE

I learnt so much from you as a person and as a driver in these last two years together.
Thanks for pushing me to improve all the time, it’s been a honor to be your teammate, and I honestly wish you the very best.
Top driver and a Top Man pic.twitter.com/4UwsTT4spC

So here's the English translation of what Sebastian Vettel sang in Italian (to the tune of Azzurro) on his final Ferrari Team Radio. He modified the lyrics to express his feelings for the team & his Ferrari tenure. 😭❤️
(Credit to vettell at Tumblr)#F1 #GrazieSeb pic.twitter.com/btf3DMF6bZ