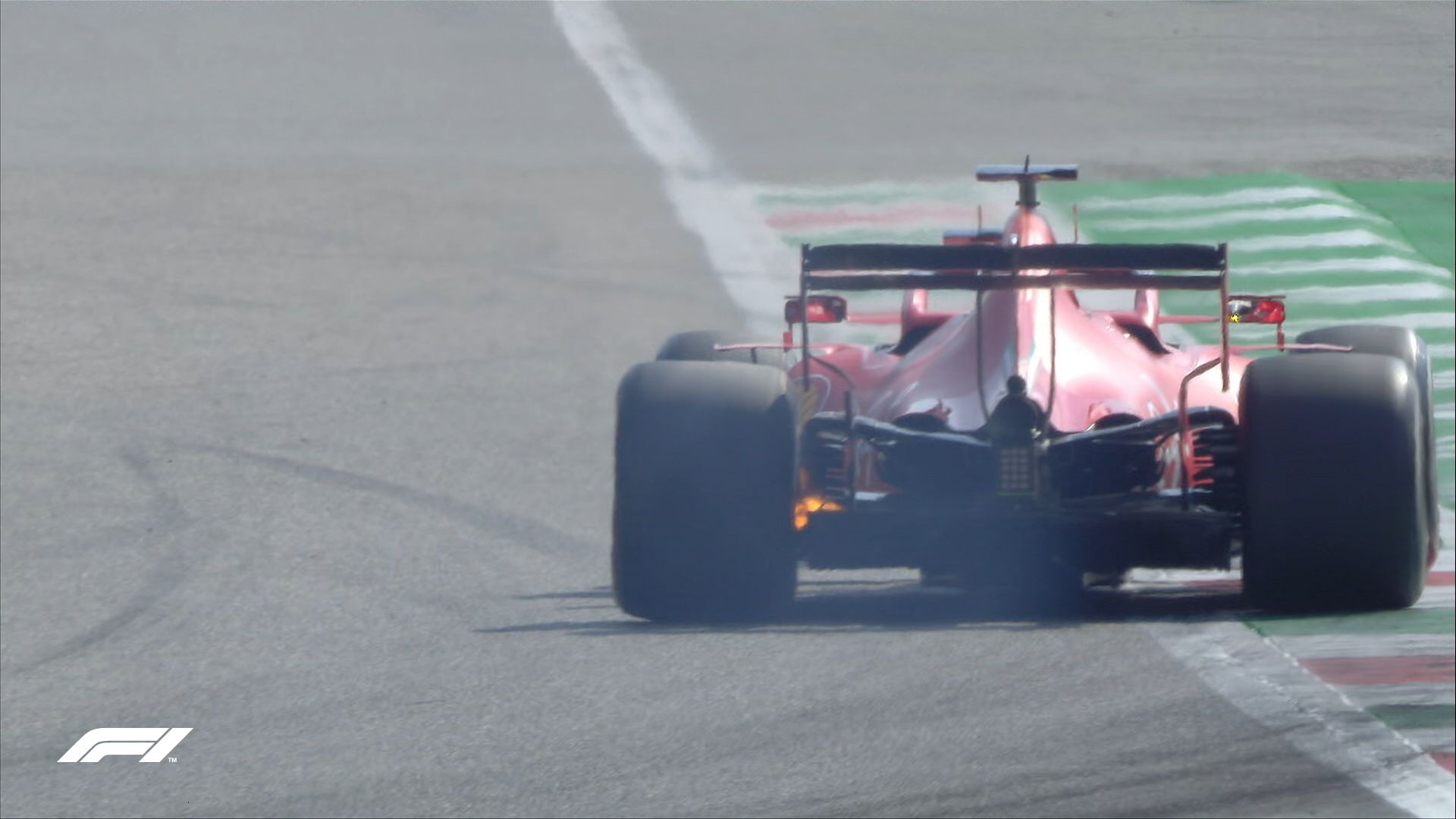 Sebastian Vettel says he was fortunate the brake failed where it did in F1 Italian GP as Charles Leclerc accepted blame while Mattia Binotto added on.

“Brakes failed, brakes failed,” Vettel told his team, Ferrari, after going straight-on at the first chicane. It was not what the team wanted to hear, nor was the loss of pressure on his brake pedal what German wanted to feel which ended his F1 Italian GP early.

It had already been a bad start to the race for the German, who ran 17th, and was under threat by Williams’ George Russell – a sign of the struggles with straight-line speed that the team have grappled with over the course of the 2020 F1 season.

Vettel only made it into the race five laps, during which he struggled on the hard compound tyres. The German, though, said he was fortunate that the failure happened at Turn 1. “It is actually the worst thing but at least it happened in probably the best spot so if it happens elsewhere it is not so nice,” he said.

“I completely lost the pressure on the pedal and went straight. On the laps before we ran into trouble and we managed the brakes but it was quite bad. We need to understand why and fortunately it happened in turn one where there is a lot of run-off but I have never had a brake failure like that so we need to have a look but I don’t know yet,” Vettel added.

It was a race that saw yet more suffering for Ferrari fans and team members, after several rounds of the same, and Vettel, too, express discontent with the current results. “We are in that position and we need to try to do the best we can to have a worthy ending to the season. We still have lots of races ahead of us and still a lot of stuff to pick up and understand so there is plenty of work so we have to be focused on that.

“So if I could choose, I don’t want to be here [talking to media when the race is on]. I want to be in the car on the track right now and not at the back of the field. But sometimes you don’t get to choose and you have to deal with what you have. At the moment that is what it is, so we have to keep our heads up even if it is difficult.”

Later in the race, the race of the sole remaining Ferrari driver Leclerc, too, met its end after a snap of oversteer in Turn 11 saw him skate across the gravel trap, burying the nose of his car in the tyre barrier. It was a large shunt, and one that appeared violent given the force of the impact.

“Bit of pain but OK,” said Leclerc. [The] crash [was] my mistake. I just lost the car. It is my fault and it was a very difficult race to be honest as I struggled quite a lot on the first set [of tyres] and then I thought we were unlucky with the safety car but with the pitlane closed we were actually pretty lucky and then with the hard tyres I struggled massively.

I tried to push but I lost it at Parabolica and I crashed. To be honest I was always struggling in these last few corners and overall in the medium and high speed we have been struggling quite a lot and I just lost in on that lap and went into the wall.

“It is difficult but I am more thankful to get out of the car without major issues so surely it is a difficult moment but I am looking forward to getting to Mugello to get back and to get a good result, hopefully,” summed up Leclerc.

Team principal Mattia Binotto even called it the worst conclusion that the team could have had, book-ending a horrendous weekend. “It was the worst conclusion to a difficult weekend,” he said. “Already qualifying was very difficult, not finishing the race is even worse, especially with Vettel I would say as the reliability problem.

“In the end I think the performance of the current car is certainly not what we would like. But again I think it is more important for us to make sure that looking ahead and progressing with car developments,” Binotto added.

As Vettel, Leclerc and Binotto noted, Ferrari should expect a slightly better performance at their 1000th event at Mugello, a track which wouldn’t be same as Spa and Monza. Reports suggests that the Italian manufacturer are in for a special livery.