Home F1 Vettel: Bahrain a ‘lost fight’ after having to give extra quarter to... 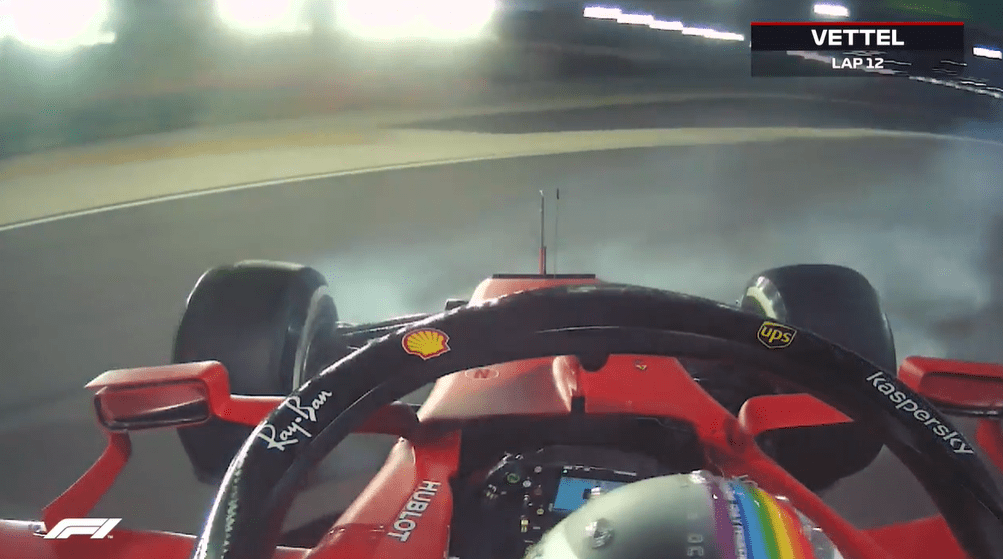 Sebastian Vettel feels his teammate’s ‘ruthless’ driving at the start of the F1 Bahrain GP ensured the race become a ‘lost fight’ as Charles Leclerc reflects on it.

There was drama between the two Ferrari drivers at the F1 Bahrain GP restart, when Leclerc dove down the inside of his teammate into Turn 1. Vettel, wishing to avoid contact, was compromised as a result of the overzealous pass, and subsequently dropped three positions.

At the time the German said over the radio, ‘And again! He can’t just do that as if I wasn’t there. It’s the same as Austria, seriously’, referencing when Leclerc hit the rear of Vettel and took them both out of the race in the F1 Styrian GP.

Vettel then continued over the radio, “This time I should have crashed. Maybe that was the better option. All morning we talk about giving room and then [he] went for the tiniest gap that [didn’t] exist, just praying that the other guy just sees you and moves out of the way.”

Vettel later called his teammate’s antics ‘ruthless’, and afterwards suggested that Leclerc’s actions ensured the race become a ‘lost fight’. The German went on to struggle in dirty air, before spinning his Ferrari SF1000 on Lap 12, whereupon he called the car ‘undriveable’ – the spin, though, wasn’t aired on the world feed, and can only be seen on F1’s video platforms.

“In free air in the end it was not so bad,” said Vettel. “In clean air after the first change in tyres it was not so bad but the first set just never seemed to start working. It was very difficult. We lost a lot of ground at the start, I took extra care for Charles [Leclerc] who I think was a bit ruthless, so it was a lost fight from there,” he summed up, adding that they spoke and cleared the air post-race.

Leclerc did not comment on his lunge on Vettel, only saying that his two starts were successful. The Monegasque came 10th in the end, having benefitted from the DNF of Sergio Perez. It was a damage limitation job eventually with the one point, after Ferrari looked out of depth on the circuit where they excelled in 2019.

“We are just not quick enough,” said Leclerc. “[I had] a very good start on both starts, but unfortunately we had to drop back for the second start – for some reason [that] I don’t know yet. Starting P12 was a very good place in lap one but after that we were P10 at the end with a bit of luck due to Sergio. That’s the way it is.”

Here’s video of the restart incident between Sebastian Vettel and Charles Leclerc: https://www.formula1.com/en/video/2020/11/2020_Bahrain_Grand_Prix__Vettel_rages_at_team_mate_Leclerc.html