Home _Home The opener of WSK Super Master Series in Lonato named the... 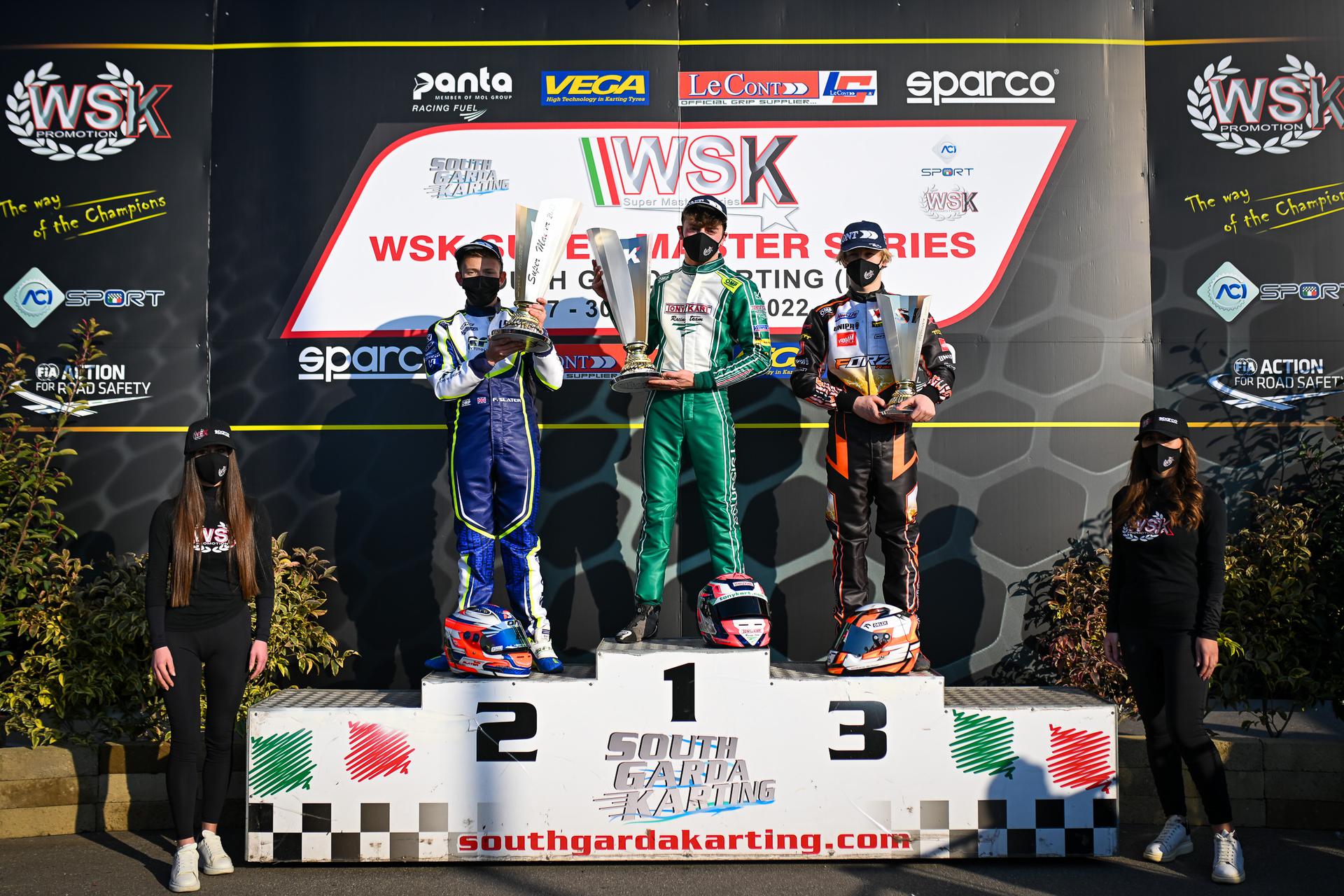 Among the over 260 drivers on track at the South Garda Karting circuit for  the opener of the WSK Super Master Series, the victory went to the Italian Coluccio in OK, the Belgian Van Langendonck in MINI, the Dutch Van Walstijn in KZ2 and the other Dutch Lammers in OKJ.

The first round of the WSK Super Master Series ended with a good participation at the South Garda Karting circuit of Lonato. In the weekend of January 30th, a total of 265 drivers from 50 different countries contested the 4 categories KZ2, OK, OKJ and MINI among the fields of all the official makes. The competitiveness shown on track has been great all the way to the final stages and the Prefinals and Finals of each category enjoyed a great weather.

The high number of drivers required two Prefinals for each category.

The Italian Luigi Coluccio (Tony Kart Racing Team/Tony Kart-Vortex-LeCont) has been leading the weekend since the beginning and kept his momentum winning OK’s Prefinal-A, while Prefinal-B was won by the Finn Tuukka Taponen (Tony Kart Racing Team/Tony Kart-Vortex), who proceeded the Pole Gustaw Wisniewski (Forza Racing/Exprit-TM Racing) that completed a good recovery race.

KZ2. Prefinal-A of KZ2 was won by the German David Trefilov (Maranello SRP/Maranello-TM Racing-Vega), who already had the upper hand in qualifying practice and heats. Prefinal-B was dominated by the Dutch Senna Van Walstijn (Sodikart/Sodikart-TM Racing).

OKJ. In OK-Junior the Dutch René Lammers (Parolin Motorsport/Parolin-TM Racing-Vega) did not have any problem to win Prefinal-A, while Prefinal-B saw the surprising recovery and victory of the Hungarian Adam Hideg (DPK Racing/KR-Iame) at the end of an exciting battle.

The Italian Luigi Coluccio rounded off the weekend taking a great victory in OK.

OK was dominated by the Italian Luigi Coluccio (Tony Kart Racing Team/Tony Kart-Vortex-LeCont), who led the Final from lights to flag. Behind Coluccio, the Brit Freddie Slater (Ricky Flynn/LN-Vortex) proceeded the Pole Gustaw Wisniewski (Forza Racing/Exprit-TM Racing), who ended his recovery race on the podium. The Finn Tuukka Taponen (Tony Kart Racing Team/Tony Kart-Vortex) has also been among the protagonists but had to settle for P4 leading his team mate from America, Luis James Egozi.

Victory to the Belgian Dries Van Langendonck in MINI.

The final of MINI had a surprising end as the Belgian Dries Van Langendonck (Parolin Motorsport/Parolin-TM Racing-Vega) managed to win the sprint to the line from the Czech Jindrich Pesl (BabyRace/Parolin-Iame) to the Spaniard Christian Costoya (Parolin Motorsport/Parolin-TM Racing) that exchanged on the lead until the closing two laps. The fourth place went to the Italian Filippo Sala (Team Driver/KR-Iame), who has always been among the quickest, the fifth to the Czech Oliver Palocko (BabyRace/Parolin-Iame).

The Dutch Senna Van Walstijn takes another win in KZ2.

The Dutch Senna Van Walstijn (Sodikart/Sodikart-TM Racing-Vega) eventually managed to win again repeating the victory claimed one week ago on the occasion of the WSK Champions Cup. Started from the top, Van Walstijn kept the lead for the whole race. His most credited rival, the German David Trefilov (Maranello SRP/Maranello-TM Racing), was third as he was overtaken in the closing stages also by the excellent Spanish driver Pedro Hiltbrand (BirelART Racing/BirelArt-TM Racing), who recovered 11 places. The French Jeremy Iglesias (CRG Racing Team/CRG-TM Racing) ended fourth, while the Italian Giuseppe Palomba (BirelART Racing/BirelArt-TM Racing) was fifth.

The Dutch René Lammers on the top step of the OKJ podium.

The final of OK-Junior was dominated by the Dutch René Lammers (Parolin Motorsport/Parolin-TM Racing-Vega) from lights to the final lap or, more precisely, to the last corner, when Ukraine’s Oleksandr Bondarev (Rycky Flynn/LN-Vortex) attacked him and managed to cross the finish line on top. Bondarev lost his front fairing in the manoeuvre and therefore was handed a 5s time penalty that relegated him to the fourth place. The first place went back to René Lammers, who celebrated on the top step of the podium. The other two podium positions went to the Russians Dmitry Matveev (Koski Motorsport/Tony Kart-Vortex) and Kirill Kutskov (BirelART Racing/BirelART-TM Racing). The fifth went to the Brazilian Miguel Costa (Sauber Academy/KR-Iame).

The next round, again in Lonato, will be the second round of WSK Super Master Series on February, 10-13, 2022. The final two rounds of the series will then follow on March 6th in La Conca (Lecce) and March 13th in Sarno (Salerno).