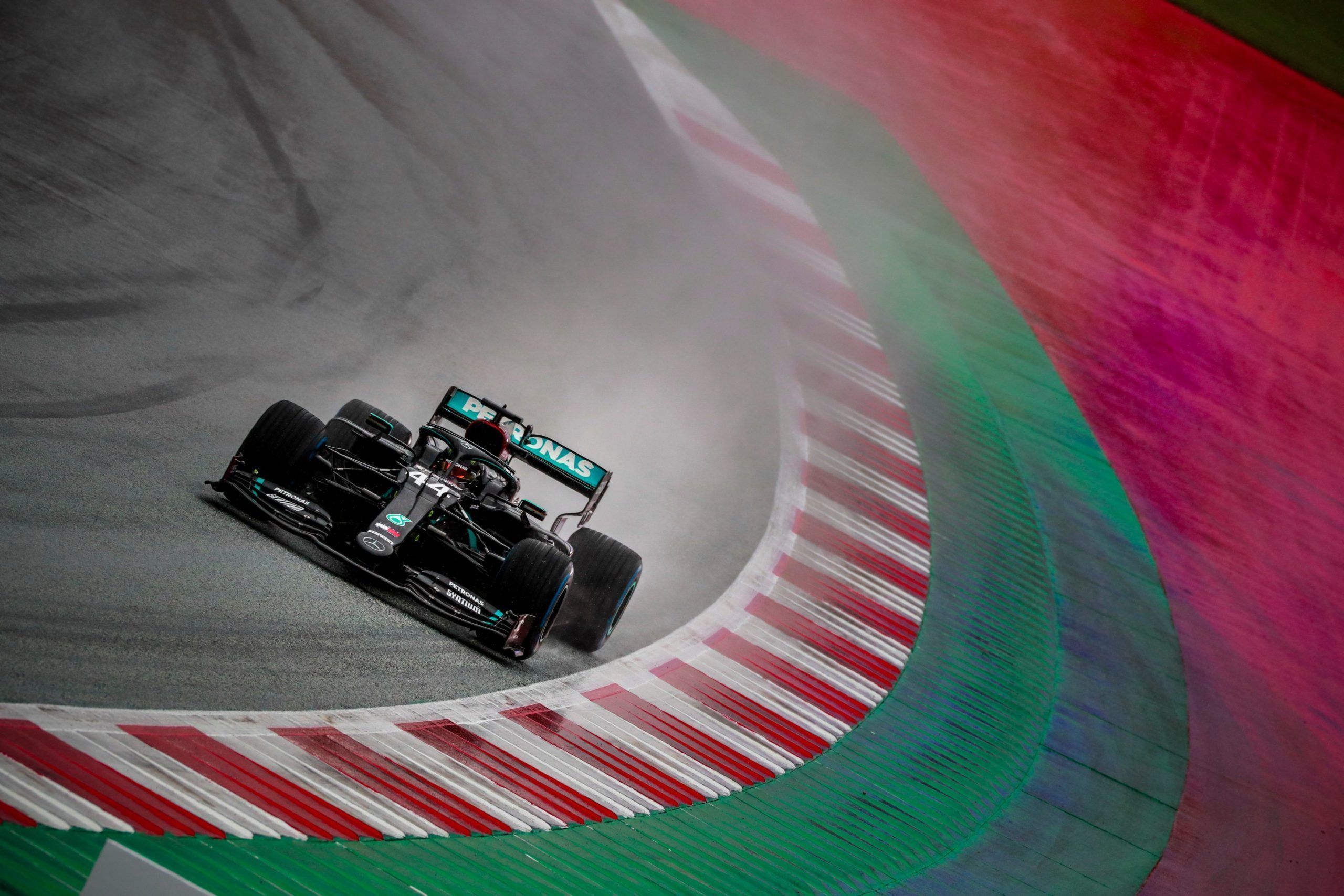 A bold call from the FIA presented fans with a thrilling wet qualifying in F1 Styrian GP as Mercedes won the battle against Red Bull Racing but Ferrari and Racing Point endured.

While the day was without FP3 in the morning, Saturday at the Red Bull Ring was action-packed on the F1 side of things, with a dramatic wet Styrian GP qualifying session – in which Mercedes’ Lewis Hamilton positively eviscerated the competition – took place.

Hamilton took pole by a margin of over one second – the largest seen in quite some time, and reflecting on his qualifying, the Brit expressed his pleasure, the result only made better by the challenging conditions. He also revealed that he very nearly lost the car in his penultimate lap.

“Honestly I am pleased with that,” said Hamilton. “What a tricky day, the weather was obviously incredibly difficult out there for all of us. A lot of the time you couldn’t even see where you were going! I had one big moment the lap before the last. Definitely had my heart in my mouth, but I was able to improve on the next lap.

“I love these days! You remember when we used to race and it was like this, but obviously a hundred times worse when you’re in an F1 car.” The dominant drive from Hamilton in the qualifying session also signaled a surprising reversal of his pace that seemed to have been lacking in FP2, even though both ran in different conditions.

The Mercedes F1 driver explained that the issue plaguing their second practice session was identified and resolved overnight, adding that he likely would have done better in the dry – a bold statement coming from a man who already had such a significant lead. “Friday was a difficult day. We did well in FP1, but then FP2 was an issue for us. We discovered the issue overnight, and it was nothing major.

“I think today would have been better for us had it been dry, but I’m grateful for the rain always. That’s where I want to start, I’m glad it was a trouble-free session. I didn’t make any mistakes so that’s always a positive,” said Hamilton, whose gap was likely helped by a spin from Red Bull Racing’ Max Verstappen.

The Dutchman was on his fastest lap at the end of the session, but fell victim to the slippery conditions on the exit of Turn 9 and actually got caught out by Ferrari’s Sebastian Vettel pitting. Verstappen stated that his car was a handful in the heavier rain that fell in Q3, and added that – even if he hadn’t spun – it wouldn’t have been enough to take the fight to Hamilton, despite the high likelihood that the gap would have been lessened.

“I think overall it was a good qualifying, but in Q3 it was raining a lot more, and it seems like we were struggling a bit more in the really wet conditions, aquaplaning a lot more and couldn’t really put the power down,” said Verstappen. “It was not easy, I tried to be a bit closer to the guy ahead to stay in his tracks where there is a little less water, but anyway, I think P2 is still good. It was just very tricky out there.

The last lap would have been better but I guess it was Seb going into the pits. I understeered because of it and then I went a bit wide, like I came onto the kerb on the exit and I lost it and had a four-wheel drift into the last corner – I don’t think it would have been enough to beat Lewis, but overall it was quite good.”

Teammate Alexander Albon struggled in the conditions. He too spun on his final lap to be just seventh – although he is to start from sixth. The Thai racer admitted to his mistake as he felt he was more happier with the F1 car last weekend than this, which can be ascertained, considering the number of mishaps he has had.

Meanwhile, a surprise inclusion in the Top 3 in F1 Styrian GP qualifying was McLaren’s Carlos Sainz, who finished third. Naturally, the Spaniard was thrilled to have achieved this career-best qualifying result, especially after an ‘enjoyable’ driving challenge presented by the wet track.

“Very happy to come back, back-to-back weekends and to put it in P3 for the first time in my career,” said Sainz. “It feels amazing because this qualifying was probably one of the toughest I have done as a F1 driver, to put together – on the last lap – a really good lap is amazing. So much aquaplaning. It was crazy on the straights, just keeping your foot down and sliding on the straights.”

Looking ahead to the race – Sainz stated he is confident in himself and the F1 team’s ability to replicate an incredible result akin to that of Lando Norris last week. “The car in race trim has been better than we thought, so we are confident going into the race,” he said. “At the same time, we saw again on Friday that the race-pace of the Ferraris, the Racing Points, were — I actually don’t know where they are starting.

“If it’s far back, then it’s good, but I’m sure I’m gonna have Alex and Valtteri behind. It’s going to be a tough first few laps, but then I hopefully can settle in to my own pace.” The other McLaren of Norris was sixth but will start ninth due to penalty. The Brit Norris was somewhat underwhelmed by his result in a session that had high potential for him.

“It was a bit nerve-wracking, you don’t know what’s going to happen,” said Norris. “I was in the wrong position in Q3, I had some nice clean laps in the beginning and my times were good, I was quite good in the middle sector and I was confident in improving a lot, but I caught the Renault ahead of me and then I couldn’t see the tramlines that the cars ahead create, so I came off through the kink of Turn 2.

“Doing so, you get a lot of the puddles and rivers that are forming and I couldn’t see where I needed to place my car so I was getting some big aquaplane moments and making some mistakes when the track was at its best effectively so it was tricky but it was nice because I’ve not driven a lot in this wet, especially in a F1 car. The only time I did it was in Hockenheim last year but I DNF’d after a few laps so it was nice to go out and have fun.

“As for my health, I won’t say what it is but it’s not so much the back, it’s more something inside [in the chest] and when I’m hitting the brakes and I’m cornering, I’m getting the compression from the G-force and causing a lot of pain. We’re trying to figure out what it is, it’s a lot better today and more because I’m drugged up slightly and it’s wet conditions but I think it’s going to be a bigger challenge in the race.”

Meanwhile, in fourth was Valtteri Bottas, who was – similarly to Norris – a bit disappointed with his performance. However, the Finn did explain that brake and tyre temperature issues greatly hindered him, where he couldn’t really get the maximum out of the F1 car and the temperature in the tyres wasn’t enough to produce a lap like Hamilton.

Moving on to Ferrari, it was another telling day even in the wet conditions with Charles Leclerc – who lined up first on the grid in last year’s race at Austria – failing to make it out of Q2. And to add insult to injury, he was later given a three-place penalty for rule infringements as he dropped further back to 14th.

The Monegasque explained what happened, and stated plainly that he and his team are just ‘too slow at the moment’. “We worked quite a bit on the balance,” said Leclerc. “I had quite a lack of front, but we worked on it, I think it got better. I don’t think the balance was a big issue towards the end, we were just not quick enough. When I see the gap, I’m quite surprised. So there’s some work to do.

“In the dry, the car is very nice to drive in terms of balance, we are just not quick enough. In the wet, it’s very similar. The balance – yes we have some problems here and there which we need to solve, but at the end of the day we are just not quick enough. I think we’re 1.8s off. There’s not this amount of time in the balance, so we need to work. I also need to work on my driving, and hopefully we’ll be getting better in these conditions.”

Meanwhile, Vettel made it into Q3, but was the slowest of all in 10th. He rued aquaplaning on the straights and repeated lock-ups under braking. “Unfortunately we didn’t have the speed, we had a lot of aquaplaning in the car, struggled to get the tyres to work, in particular the front, so it wasn’t easy to judge,” he said. “We had a lot of front locking, a lot of aquaplaning down the straight. In the last lap, I tried to do a bit more and risk everything and it didn’t work, I lost the car in Turn 8. Still, I had to try, but not great.”

Looking at others, AlphaTauri’s Pierre Gasly’s Q3 appearance was a big win for the Frenchman, finishing eighth. Naturally, he was delighted with how he ran. He rued the offs of his F1 rivals on his last lap – one that appeared to potentially to be two or three tenths faster which would have put him up in fifth.

The Gasly’s headline run, though, was overshadowed by a Q2 story: this one related to Williams, and their near-inclusion in the final session – which was an impressive feat given their slump in recent years, and one for George Russell, who qualified P12. The Brit added that he wouldn’t have believed anyone that he would make it into Q2 in Round 2 of 2020 F1 season, considering their pace.

While there was elation here but Racing Point had a sorry day with Lance Stroll in 13th – will start 12th – and Sergio Perez not even getting out of Q1 to be 16th. The Mexican had similar problems like Bottas where he simply couldn’t get the F1 tyres to work, terming it as a huge ‘disappointment’. He is banking on the dry pace to fight through.