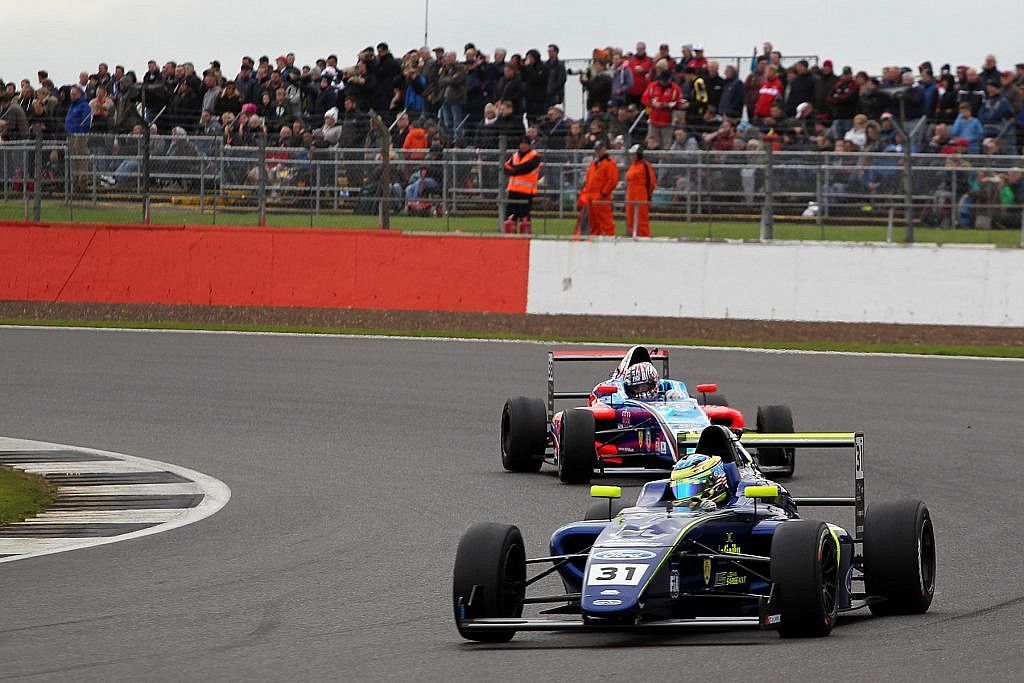 Just three weeks after his maiden victory in the F4 British Championship certified by FIA – powered by Ford EcoBoost, Logan Sargeant was at it again. The American led home a Carlin one-two finish, with Jamie Caroline in second at Silverstone to put Carlin within touching distance of the Teams’ Cup.

Sargeant had to work hard for his victory. Starting on the inside of the track, the Carlin racer was presented with a track still damp from rain early in the morning, while drivers on the outside benefitted from starting on the dry racing line.

Caroline profited most, spectacularly running around the outside of four cars through turn one to take the lead while Sargeant had to contend with trying to hold on to second as poleman Johnathan Hoggard dropped back to fourth.

Oscar Piastri had to contend with starting on the damp side of the track too and like Sargeant battled brilliantly in the opening stages to prevent himself from falling back through the order. Contact between Lundqvist and Hoggard soon promoting the Aussie to third and in the hunt for the win behind Sargeant and Caroline.

Just under half way through the race Caroline struggled for pace. Sargeant wasted no time in taking advantage of the situation with a sublime late braking move around the outside of his team-mate at Brooklands.

Caroline refused to give up and chased Sargeant for the duration with Piastri looming behind the Carlin pair. The trio were locked in a stalemate in the final laps, none of them able to make a pass and separated by just over a second as they crossed the finish line.

Hampus Ericsson continued his fine Silverstone weekend with another Ford F4 Challenge Cup win and just missed out on the overall podium in fourth after climbing up the order from ninth.

Karl Massaad broke into the points and finished eighth, having started outside the top 10. The Lebanese ace was the highest placed Double R runner after Lundqvist endured an eventful race which saw contact with Pasma as he tried to battle back up the order following the coming together with Hoggard.

Pasma did well to remain in contention and hold on to eighth, ahead of Lundqvist and behind Oliver York.

JHR Developments driver Manuel Sulaiman put in an inspired performance and was the race’s biggest improver. Picking his way through the field from 18th on the grid to 10th to take a hard earned and well deserved point.

The Mexican finished ahead of Alex Quinn who recovered well after going off track due to a battle with Oliver York, for which the latter was awarded a five place grid penalty for Round 27, demoting him to an 11th place grid slot.