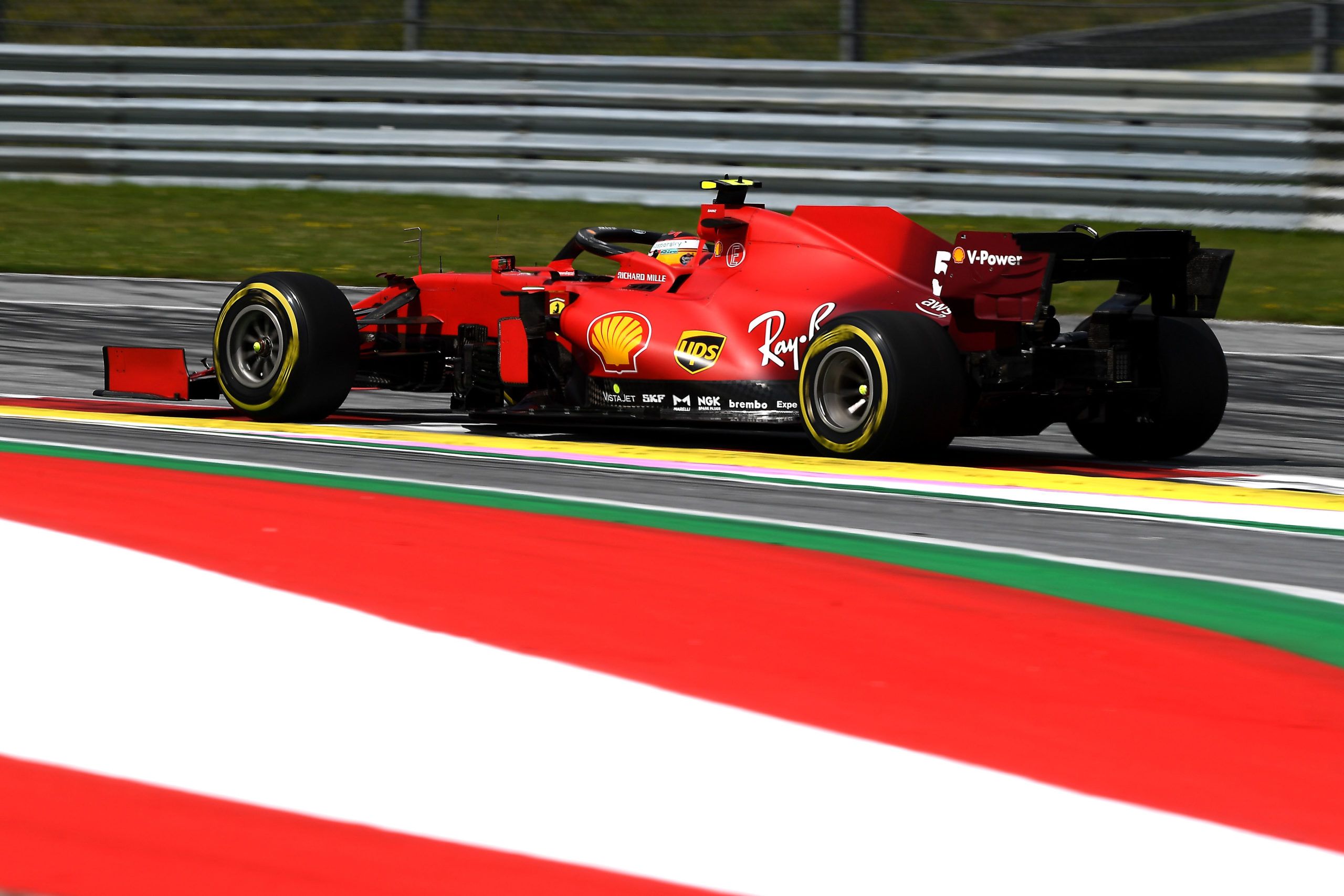 Carlos Sainz reckons the hold-up behind Lewis Hamilton may have cost him to at least challenge Lando Norris in F1 Styrian GP, as the duo add on their races.

For Ferrari’s Sainz, the F1 Styrian GP saw a much better weekend for both he and teammate Charles Leclerc, compared to French GP. A sixth place from 12th on the grid was impressive fight on one-stop, which left the Spaniard happy overall.

But maybe the result could have been stronger too perhaps or at least he could have had a fight as he noted after the race. As it was seen in the grand prix, Sainz got stuck behind Lewis Hamilton after his pit stop and for about 10 laps, he didn’t pass him.

The initial stint of Sainz was solid. However, his day went pear-shaped because he got stuck behind Hamilton for several laps. By all accounts, he had the speed to make it past Hamilton and challenge and fight McLaren’s Norris, but he got for longer.

He eventually had his way after Hamilton started to struggle whole lot, but it was too late for him to push on as his own tyres started to diminish. “I am very happy with the result,” he said to TV media. “It was a very good day in the office, we managed to have a very strong first stint on the medium, overcut the midfield.

“It was a very weird scenario because I was on very fresh hards, had Lando in front that I knew I could catch in clean air, but suddenly I found myself behind Lewis and I doubted for 5-10 laps, whether to follow him and try to catch Lando. But I realised that Lewis was struggling with his tyres and I was much quicker and I had to unlap myself.

“But by the time I did, it was too late to catch him. Not sure if it lost be a place but it would have been a good fight and fun. I say this because the most difficult bit was done. I had a fresh set of hards to chase Lando and suddenly I spent 15 laps behind Lewis, scrubbing my front tyres to get into his DRS to see if let me by.

“In the end, they behaved like a gentleman, like Mercedes always behaves, and let me by,” summed up Sainz, who reckoned that it was a massive turnaround in race fortunes from a weekend to forget for both drivers a week previous – so much so that he felt on pace with Red Bull’s Sergio Perez in the race trim.

“It is a great comeback on race pace, I felt the car was on top of the midfield, even at times, we were strong as Perez in the Red Bull,” said Sainz. “So, it was a very positive day for the team, just unfortunate that we couldn’t take that two points from Lando with the strong pace.”

From that viewpoint, happiness and satisfaction at a job well done but it also sounds like a proverbial “if only” situation. Sainz had a free tyre choice owing to qualifying 12th and had a consistently good day. However, one could also take from it an air of irritation as he had the speed and if he had unlapped himself earlier he could have caught Norris.

Ferrari and Sainz have a second chance at the same track next weekend and should take heart from their performance. So far this season has seen them perform better at tighter circuits (Monaco & Baku), perhaps next week will give us a better idea of their speed at faster tracks.

For Norris, meanwhile, it was another haul of points in 10th and was pretty much the best of the rest. A strong qualifying saw him start on the second row. He scored points for the 13th consecutive race, as he also challenged Sergio Perez and Valtteri Bottas early on, but gave up, knowing the pace difference.

“I think with how much quicker Red Bull and Mercedes were, I had no chance,” said Norris to written media. “I tried holding them off for as long as possible in the first stint, which was still over ten laps or something. But they were so much quicker. I was just starting to ruin my own race by harming my tyres and stuff, so I had to think about that still.

“And the Ferrari’s were very fast in the end, just all the way through the race. Their race pace was already very strong on Friday, so we were expecting them to be fast. I still had to push a bit; you know. It wasn’t a completely easy and straightforward race, but we did what we had to do and we couldn’t have done any better so,” summed up Norris, who reckoned that the race showed how far Mercedes and Red Bull are.

“A bit of the fun comes from knowing I’m in the worst car and I’m ahead of them,” said Norris. “I think it’s cool, you’re also realizing how much quicker they are. This proves how much better their car is. On a day like this, in qualifying for instance,  I out-qualified one of them. It shows we’re doing a good job in qualifying at times.

“Days like these also show how much more we need to improve and make the car better and things like that. We have got a lot of work to do,” summed up Norris, who then added that fifth place was always a fairly safe bet but if Sainz unlapped himself earlier and had Charles Leclerc not had that Lap 1, its possible Ferrari might have challenged him.

“I think we still had very good pace comparing to everyone bar Ferrari, who were very similar,” said Norris. “I think like their strategy was also very strong, but he came from a long way back. They looked good already on Friday, so once I knew he was behind me, at some point in the race he was ahead of me and he hadn’t stopped yet.

“I knew he was going to be very fast at the end. It’s the same strategy as what he did with us three years ago in ’19. So, I expected a bit from him, which is of course OK, I think if they started behind us, they probably could have finished ahead or been a lot more of a threat,” summed up Norris.

There is no doubt that his stock is rising. Some may have questioned him signing a multi-year contract some weeks back but it is looking good so far. Over the past few races also, his performances have out shone those of his previously race winning and more experienced teammate.