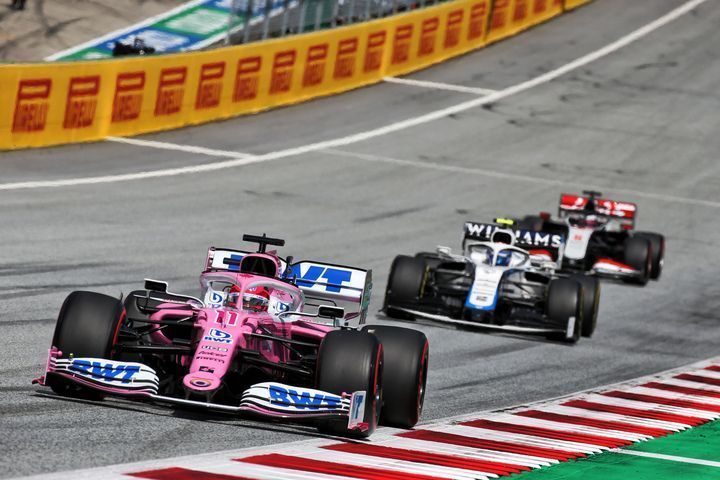 George Russell seems confident to stick with Williams amid Sergio Perez rumours, who doesn’t say much, as Antonio Giovinazzi leaves it on Alfa Romeo and Ferrari regarding his F1 future.

The Haas F1 line-up was the only one to be hugely speculated about ahead of the Portuguese GP as Red Bull Racing, AlphaTauri and Alfa Romeo Racing, were also in the news. But a brand new one, which popped up out of nowhere, was related to Williams.

Certain French reports linked the to-be former Racing Point driver Sergio Perez with Williams, especially after Dorilton Capital takeover. It put both George Russell and Nicholas Latifi in check, who at present have a valid contract in place to race in 2021.

Both felt that way as well when speaking to media including Motorsport Network, The Race, Motorsport Week, Racefans.net, BBC, Reuters, AMuS and more. “I have a contract for next year and with the new owners coming in nothing has changed whatsoever from a contractual perspective under the new ownership,” said Russell.

“I’ve actually not spoken to the new owners about it because from my side there’s no concerns. They’ll all be here this weekend and I’m sure any air will be cleared but I am not concerned that I will be on the grid next year with Williams. There’s always speculation, I guess the media like to build a lot up, it’s understandable there’s speculation because there’s so many great drivers who are available fighting for a place on the grid right now.

“There is Sergio, both Haas guys, Nico Hulkenberg as well, there’s always going to be speculation, unfortunately in Formula 1 there isn’t going to be a place for everyone who deserves to be here. I’m in contact with the guys at Mercedes weekly, we’re always staying in touch. I feel in really privileged position to have their full support behind me and long-term I think I’m in a great position,” summed up Russell, who reckons, he has less worry, especially with the new owners in place.

“There’s probably even less concern for me now that we do have new owners in place who are investing massively into the company which is really exciting,” said Russell. They’re focused on bringing new, exciting talent into the team and the financial worries that may have been around in the team in years gone by are no longer there.

“Obviously F1’s a very expensive sport but with the new investment, new owners around it, it’s really exciting. And already seeing glimpses of what they’re doing, being part of that over the past 18 months and the direction we’re heading in, it’s a really exciting time. Not only for them, but for me to have gone through the struggles of the past 18 months and to be part of that journey into 2021 to hopefully propel the team realistically, in the best case scenario, into the midfield battle,” summed up Russell.

Speaking about the face value of F1 as a sport if it happens that Russell – a young blood – is dropped, the Brit didn’t wish to say much on it other than talking about the hard work put in to be where he is now. “It’s not really my place to comment, I guess it’s the job of the teams and you guys to decide how good my performance has been and if I’m worthy of a space in Formula 1 or not,” he said.

“Ultimately, Formula 1 is about the best of the best and you always want positions to be purely based on talent and performance. I’ve put my heart and soul. I have worked my socks off to get into Formula 1, and keeping my position here, I feel like I’ve done a sufficient amount over the last 18 months, and really made a lot of progress with myself and what have you. I guess that’s your place to say if that would be a huge loss.

“It would be nice to hear that if you guys thought it would be a loss, but no need to comment on speculation and I’m pretty sure at the moment.” On his teammate side, Latifi did not add much, but just echoed the sentiments of Russell. “Like George said, we have a contract and just because the team is under new ownership now doesn’t really change anything on that front so I’m not concerned at all. I have a contract with the team for next year and I’m confident I’m going to be on the grid next year.”

On the other side, Perez did not say anything on the topic as he wished to keep the talks private, but F1 senior writer Lawrence Barretto noted that the Mexican has had discussions with Williams. He noted that the Mexican also has held talks with Red Bull consultant Helmut Marko, who stated that there’s only two out-of programme racers to look at.

“As I’ve said before, I haven’t signed anything,” said Perez. “At the moment there’s not a lot that I have to report or say. The season is coming to an end so it’s getting close and I should be in a position to say something pretty soon I think. But up to now I don’t think there’s a lot of point in giving away anything because I also want to keep my negotiations private.

“I think we’ve got to be respectful of all the teams that we are talking to and so there’s no point to discuss anything at the moment. There are not many teams out there! Actually very few. It’s not like a number, but there are very few teams out there that have a good project that is something that really puts me into their project, and I’m willing to be in that project,” summed up Perez.

While the new game of Williams is played out, the Haas and Alfa Romeo seat has F2 racers written all over it, with Ferrari juniors eyeing one seat each, at the very least. It all hangs on what happened with Kimi Raikkonen and Antonio Giovinazzi – the latter also coming from the Italian manufacturer’s stable.

Multiple reports said Raikkonen has signed already but the Finn has been adamant since Germany that nothing has been agreed or signed thus far. His stance remained the same in Portugal as well, while Giovinazzi put the decision on Ferrari and Alfa Romeo. He, though, added that it doesn’t depends on what the Finn decided to do.

“I think it’s not my decision,” said Giovinazzi. “Like I always say, I am focused on my job that is driving, and then for the rest it is not my decision. We need to see what happens with Ferrari and Alfa Romeo and then we’ll see. I hope a decision will come soon.  For me the target is to be on the grid next year. I would like to be with Alfa Romeo because for me it’s an important team – it’s the team that I started my career with, in Formula 1.

“I would like to continue with Alfa Romeo but like I say, it’s not my decision, there’s talking going on and hopefully soon we can have the answer. And, I don’t think so my future depends on Kimi. I don’t know what he will decide, but from my side it’s not whether Kimi stays or not. It’s a decision from Ferrari and Alfa Romeo together.”