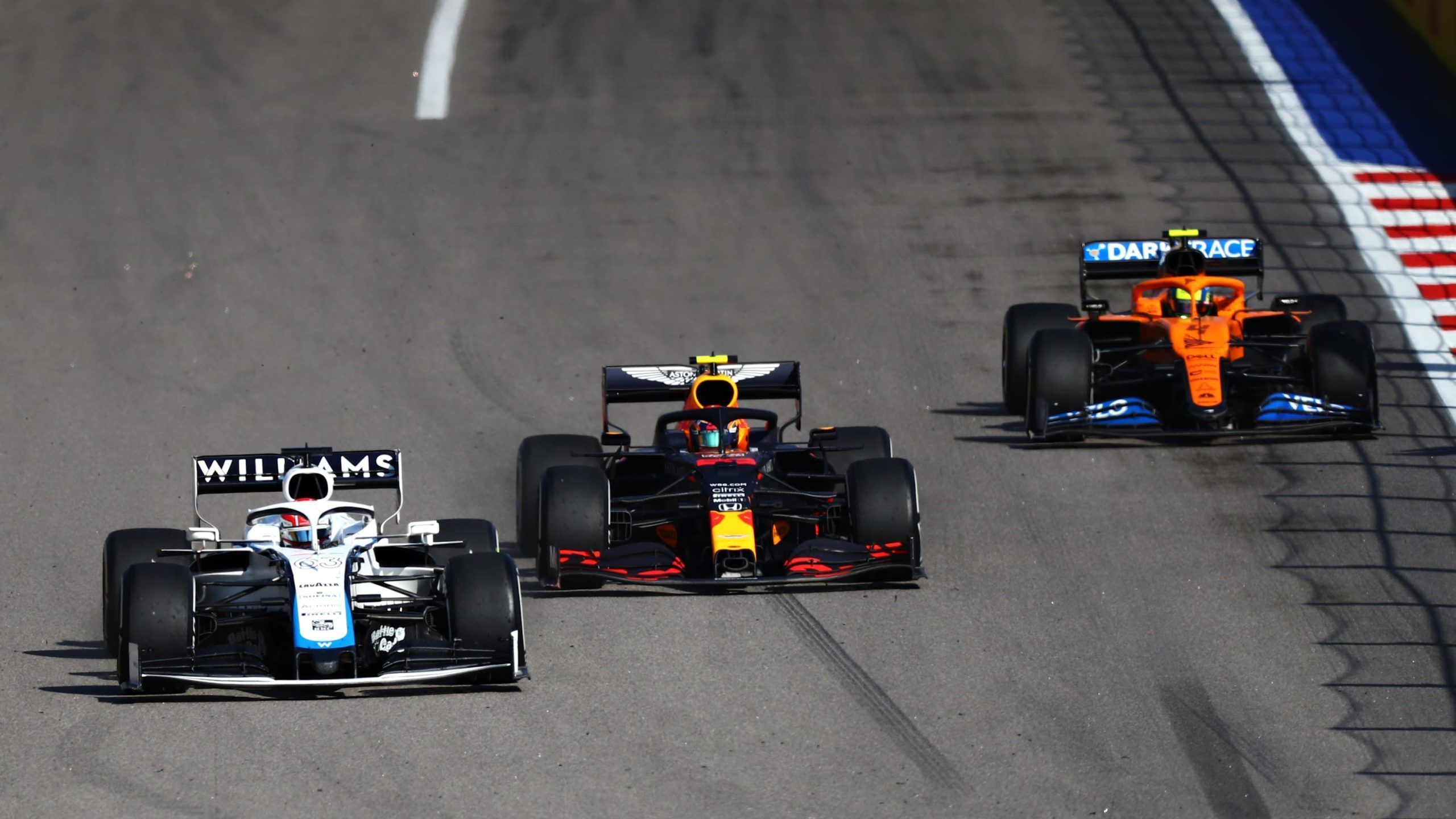 George Russell says he had fun in his brief battle with Twitch mates Alexander Albon and Lando Norris in F1 Russian GP, even if it was in backend of the field.

A Lap 1 trouble for both Red Bull’s Albon and McLaren’s Norris along with William’s Russell, brought the Twitch trio together in F1 Russian GP at Sochi, while the fourth member Ferrari’s Charles Leclerc was running in the Top 10 at that moment.

All the three drivers were on the hard compound as the multi-lap fight ensued where Norris was the first to make a move on Albon. The McLaren racer then tried his hand on Russell but it allowed the Thai driver to pass both of them at one go to have track position.

Norris – despite having a steering issue – then eventually passed Russell with the pace advantage. While the Williams driver was left behind, the McLaren racer and the Red Bull driver were together again with AlphaTauri’s Pierre Gasly involved too.

Gasly was the winner with the fresher compound as Albon scrapped in the fight too, while Norris locked-up to drop down after a third stop. Even though the previous battle wasn’t for points but the Twitch trio had supreme fun against each other in respectable manner.

“It was great to be battling with those guys, obviously, for me to be trying to hold up a Red Bull and a McLaren was very, very tricky,” Russell was quoted by F1.com. “But we had great straight-line speed this weekend which actually made it that much easier to keep them behind and obviously I think there was a good amount of respect between the three of us which made it great.

“That lock-up did actually hurt the race quite a bit but nevertheless we still would have had to pit from the hard as the hard would not have made it to the end. The pace just wasn’t there in the race. We actually understand why now.

“I was very confused when I finished the race where the pace had gone but we do know now why we had no pace in the race, and it is a relief now, as I was actually pretty disappointed and worried directly after the race,” summed up Russell, who revealed that Williams had a problem of tyre temperature in all of the grand prix.

It was same for Nicholas Latifi as the tyre temperature was way to high than what it was showing to them on the steering wheel, which misled the drivers about their degradation and which forced the British racer to pit three times in the F1 grand prix.

“It’s purely tyres, which unfortunately in this sport it always seems to be the case,” said Russell. “We just had a tyre temperature issue so the tyres were running much, much hotter than expected, and I was reading on my steering wheel, and that misled us a bit.

“Long story short the tyres were just running well over the window and if the tyres are too hot and you keep pushing on then they just degrade,” summed up Russell. Both he and Norris ended up outside the points position with Albon scoring one.

The Thai racer started from 15th but dropped to last after safety car re-start and had to fight his way up to 10th. He struggled on the hard compound, while it was better on the medium. However, as per Christian Horner, the track exposed his weakness.

Horner revealed that Albon is sensitive to tracks with short corners and big braking zones, which is why he struggled more at Sochi. “It was a lot of work for one point and it wasn’t an easy race,” said the Thai racer. “We struggled at the beginning to overtake and get through the pack on the hard tyre and so we lost a lot of time.

“When we swapped to the mediums it was a little better and we did as much as we could but it was difficult out there and a frustrating race. We were just in traffic the whole time without any clean air so we couldn’t put down any really good laps.”