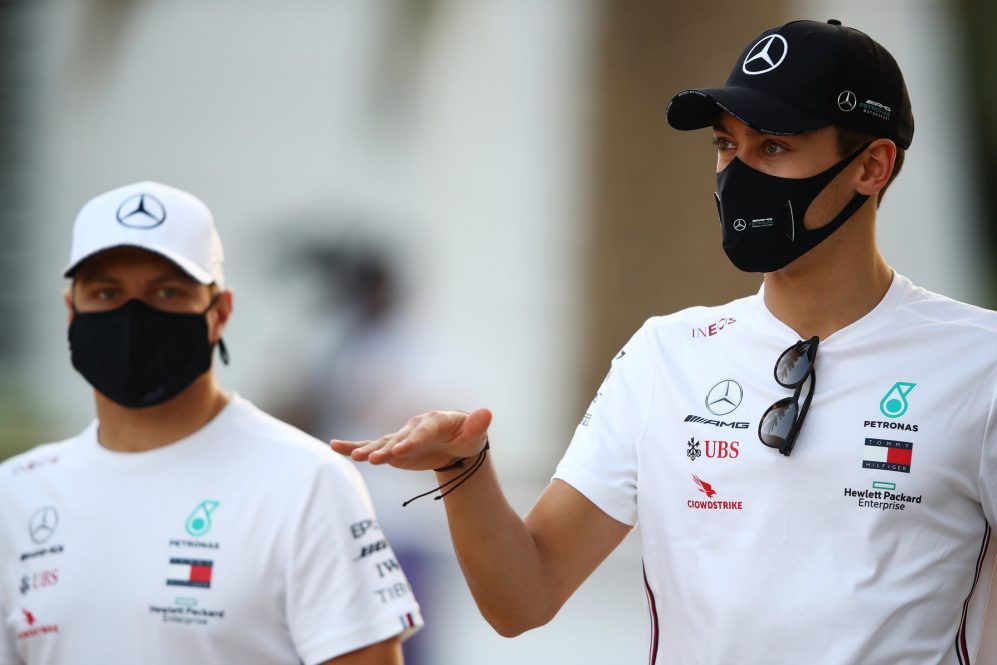 George Russell doesn’t see any change in his relation with Mercedes and Valtteri Bottas after the happenings in F1 Imola GP.

Last year’s Sakhir GP was not the last fight between Mercedes’ Bottas and Williams’ Russell, as the duo came together in F1 Imola GP, in tricky conditions. The latter was trying to overtake on warmed-up tyres, while the former was warming his tyres up.

The two collided, resulting in a huge incident. Russell was not pleased with Bottas, as the two blamed each other for the incident. The British F1 driver later on did admit that the Finn wasn’t fully at fault, but stuck to his aftermath reaction.

He apologised for his actions towards Bottas on Monday after the incident, but before that, he noted that the incident wouldn’t change his relation with Mercedes and or the driver in concern. In fact, Toto Wolff wasn’t pleased by the actions of the British driver.

Wolff was more displeased since the crash affected Mercedes, as he spoke more like a team principal, than a manager/mentor of the drivers. “It’s not going to harm my relationship with Mercedes,” said Russell to media including FormulaRapida.net. “I’ve already spoken with them, and there’s understandings from both sides.

“I’m sure from my side, when you are looking forward, you are not really taking into consideration of which car it is. But at the end of the day the move was absolutely on. It was only three-quarters of the way down straight and that would just have been a clear easy simple overtake, had it not been a little bit damp and that point.

“The point I pulled out, it wasn’t damp. It was just the track was going to the left, I was squeezed slightly to the right and that’s where the dampness was. Should I have reacted how I did afterwards, in the heat of the moment? Probably not, no. But as I said, the emotions are incredibly high. We’ve exchanged words and that was it.”

On Bottas, Russell added: “Valtteri and I will talk afterwards and we will clear the air. Obviously in the heat of the moment, there are a lot of emotions, but I’ve got no intentions to hold any grudges or have any bad relationship with any driver on the grid. I mean it is in my intentions to clear the air with him.

“I’m sure we will probably have a phone call in the week just to put it behind us and move on. We’re all racers. We’re all battling for position. And at the moment it’s incredibly disappointing, sour, for all of us. You know, your heart stops for a moment when you crash at over 200 miles an hour. You just don’t know what’s going to happen.

“My anger towards him at the time was more that I thought he put us both in harm’s way and it was an incredibly scary incident to be honest, at that speed. Fortunately we both walked away from it with no battle cars. But obviously it could have been very different. There is no tension at all between Valtteri and I.

“But obviously you can take that comment [to Sky Sports] as you wish really. I think it was pretty clear how it was intended. But maybe I’m wrong. Maybe he’s just fighting for absolutely every position. And as I said, he is his right to do so,” summed up Russell.

From the side of Bottas, the Finn notes that they aren’t ‘friends’ as such, but it doesn’t mean there is no respect as drivers. “I’ve never really worked that closely with him, but obviously he’s been around for some time because he’s been the reserve driver and done some testing for the team,” he said.

“I know him a little bit, but there have never been any issues. In terms of this one, obviously I was not happy with how it ended up. But I’m an easygoing guy, so there are no problems. But I can’t say I’m friends with him, like I can’t say I’m friends with most or any of the drivers really. From my side, no issues but today was not ideal because he made me lose a good chunk of points potentially and it was his mistake,” summed up Bottas.