Home F1 Ricciardo was sure Stroll will get penalty, Perez only had one go... 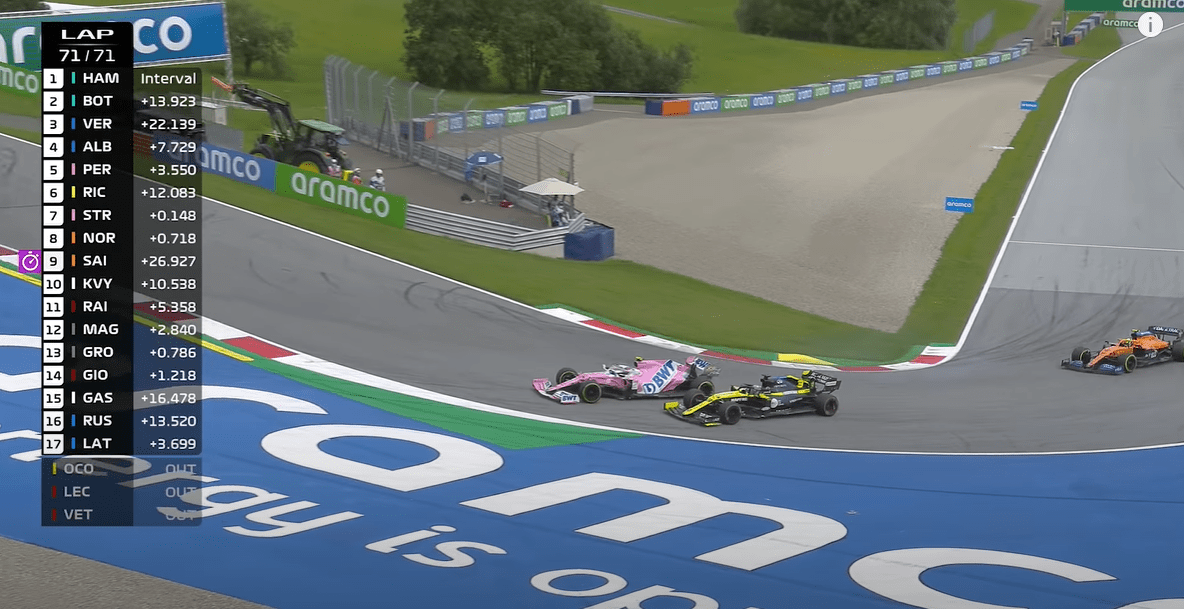 Daniel Ricciardo thought Lance Stroll will get a penalty for his move in F1 Styrian GP as Sergio Perez says move on Alexander Albon was his only opportunity, while Cyril Abiteboul blasts the people at Enstone.

While the middle and early stages of the F1 Styrian GP may have been called boring by fans, this term is not applicable to the closing stages of the race, and certainly not the last two laps at Red Bull Ring, in which there was drama in the mid-field fight.

In Turn 3 of the second-to-last lap, a lunge on Renault’s Ricciardo from Racing Point’s Stroll kick-started two laps of excitement in this area of the grid, and – looking back on that first event of the chain reaction – the Australian was less-than impressed by his F1 rival’s antics that disadvantaged the pair of them as they both had to go off track.

The Australian did accept some blame, but only in that he says he should have kept the door shut more to prevent Stroll from having an in. “First, he didn’t really get past, I mean, he forced both of us of the track, I’ll be critical of myself and I should have closed the door but I don’t think he was going to make the move,” said Ricciardo.

“He was desperate with Lando coming and I think he had to do something as Lando would have eaten him up but I took the apex and we crashed. So, just frustrating that we also a position to Lando. To end the race like that is not a good feeling. The first part on the medium, we were quite strong and then we had the soft, we had some other issues.

“Tthe tyre wasn’t really working as we hoped it would. We were doing good to hold onto Lance but with two laps to go, it fell apart a bit. If he pushed me off but he stays on track, then that’s fair enough but if takes both of us off, then it is not a move. I am trying out of the apex to avoid a crash.

“I should have hugged the white line and blocked from earlier, but it was a move that he was never making and losing a place to Lando was bittersweet,” summed up Ricciardo, who was confident that Stroll would be penalised but the stewards ruled it as a racing incident.

Explaining his thought process, Stroll added: “I spent the second stint to get on Ricciardo but he was very strong into Turn 1 and out of it which made it difficult and challenging for me to get by. Finally on the last lap I saw a very small opportunity with a small gap and I went for it.”

The Canadian did pass Ricciardo, maintaining his position through the finish. However, he ended up in the same position that he sat in prior to his incident with the Renault driver at the end as he was overtaken by McLaren’s Lando Norris. The opportunity arose in the final corner for him to be promoted into sixth, as his teammate’s damaged car sat just ahead of him on the exit. However, this never came to be as he finished narrowly behind Perez.

“I arrived at the worst moment behind Sergio because it was right at the middle of Turn 10, so I was just stuck behind him and when we got on the power, I just finished a front wing behind him, so very tight last lap and an exciting race,” said Stroll. “Looking at the race, it was a good first stint, we settled into the race nicely, got past Gasly early and then we were pushing on catching the Renault ahead of us.

“We stopped a couple of laps earlier than Ricciardo and Sergio, at that point I was just fighting through traffic to get free air. In the second stint, I made a mistake and Sergio managed to get a run on me in Turn 3 and overtake in Turn 4,” summed up Stroll, who added that he reckons the Racing Point could have been the second or third fastest car.

“Absolutely, I think in Styrian GP, we arguably had the second quickest car or maybe third,” said Stroll. “We were definitely quicker than Renault, McLaren which was really positive. It was a perfect race for both of us.”

Meanwhile, Perez got his damage whilst trying to overtake Red Bull Racing’s Alexander Albon – a move that quickly turned sour. He was surprisingly happy given the circumstances under which he ended the race, as he added that the move was the only realistic chance for him to get through the Thai racer.

“I think it was a great recovery from qualifying, great pace in the car and good work from the team with the strategy,” said Perez. “We managed to recover as we are up to P5 and nearly P4 in the end. I was pushing hard on Albon and I did not have any opportunity apart from the one that I took, unfortunately, I touched at the wrong angle.

“I understeered a bit towards the exit. I opened up the steering wheel when I was picking power and then I broke the whole front wing. I was lucky to lose only one position from it. I had to give it a go because we were pushing flat out with all what he had and that was the only opportunity I was going to have, Albon was quite strong in that medium corners. Unfortunately that didn’t work,” said Perez.

As a result, Perez lost out to Norris as McLaren took heavy points again in the midfield fight. Even though Renault counts itself in it, the team has not got enough points from the first two rounds of the 2020 F1 season, especially due to unreliability, which angered Cyril Abiteboul after the Styrian GP.

Already in the first race, Ricciardo retired due to cooling issues in the radiator. It was sent back to Enstone for checks and was returned to Red Bull Ring. This time, Esteban Ocon saw the burnt of it as Abiteboul termed it as unacceptable to happen in a short season.

“Lots of emotions after a weekend like this one. We had good emotions after qualifying with both cars reaching Q3 and Esteban who showed a very strong pace in extreme conditions, demonstrating his outstanding driving skills in his second quali with us,” said Abiteboul.

“The emotions after race were much more painful after another retirement for one of our cars caused by exactly the same issue as last weekend. We had put lots of effort to return, examine the parts in Enstone, and send it back to the track, but clearly there is something that we missed. This poor level of reliability is, obviously, not acceptable in a field that is so tight.

“The race also showed that we need a bit more pace against our direct competitors. Daniel had a good race and he did well to defend for so long. Overall, the prevailing feeling is one of disappointment, however, we should not deter from the fact we’ve improved massively at this track compared to previous years. The car has made huge steps forwards but so have the other teams. Now it’s gloves off for the rest of the season.”

Here’s the video of Ricciardo and Stroll: https://www.formula1.com/en/video/2020/7/Styrian_Grand_Prix__Stroll_forces_Ricciardo_off-track_at_Turn_3.html

Here’s the video of Perez and Albon: https://www.formula1.com/en/video/2020/7/Styrian_Grand_Prix__Perez_and_Albon_collide.html