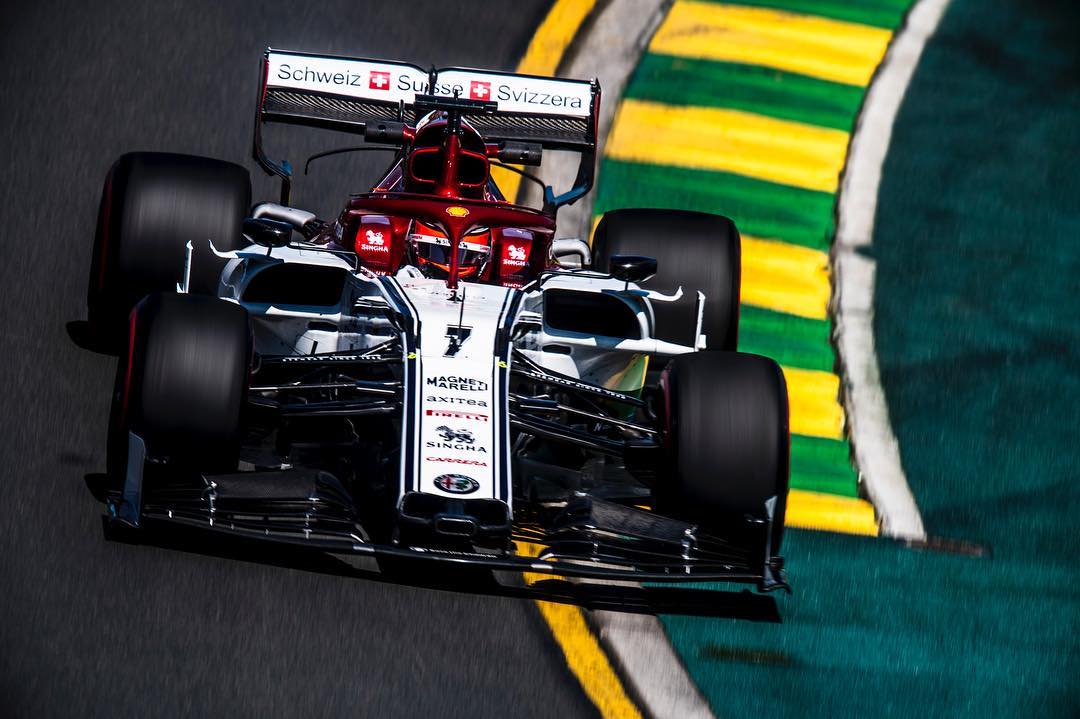 Alfa Romeo Racing’s Kimi Raikkonen wasn’t too happy with his first qualifying in the new car in Australian GP to start the 2019 F1 season.

All weekend, Raikkonen had been thereabouts in the Top 7 with the Haas drivers in the top half of the midfield pack. The Finn made it into Q3 without any major trouble but couldn’t set a lap any better than ninth for the Australian GP race.

He was not only beaten by the two Haas drivers Romain Grosjean and Kevin Magnussen, but also McLaren’s Lando Norris, who surprised everyone with his performance. When asked about his run, Raikkonen was straight up disappointed.

The Finn though added that the Alfa Romeo car has in it to do well. “Am I happy? Yes and no,” stated Raikkonen. “I’m a bit disappointed, as I think there is more in the car and we could have ended further up, but I never really put a lap together.

“Now we have to get through the first two corners of the race without incidents and then take it from there.” Even from testing, it looked like Alfa Romeo to be in the hunt with Haas and Renault for the top end of the midfield pack.

While the two Renault drivers couldn’t quite get through Q3 but will be a threat in the race. Raikkonen’s teammate Antonio Giovinazzi was among the list of drivers who couldn’t quite achieve what they had hoped for from the first qualifying session of 2019.

Giovinazzi ended up 14th for Australian GP start after his warm-up lap in Q2 did not go well which meant he couldn’t work with the tyres on his quick lap. Just behind him was Toro Rosso’s Daniil Kvyat, whose lap was ruined by Ferrari’s Sebastian Vettel’s off.

While the Russian doesn’t blame him for it but he did lose time to end up behind his rookie teammate Alexander Albon even, who did a good job in the end to line-up 13th for his maiden grand prix event behind the two Renault drivers.

Both of the French outfit’s drivers were also left slightly dejected with Nico Hulkenberg ending up 11th ahead of Daniel Ricciardo. They were on the same page in terms of making into Q3 with the German having a lock-up and traffic to not get a clear lap.

At the same time, Ricciardo lost out in the first sector on his quick lap. “Making Q3 was definitely possible,” said Hulkenberg. “It’s unfortunate that we had a small problem, which cost us a shot at the Top 10 [to start the Australian GP].

“I lost a bit of time on my first lap in Q2 through traffic and a lock-up, but we showed the pace was there for a strong result. We’re competitive. We know it’s close and small margins make a big difference.

“We’re not in bad shape. The car felt good with long-run pace on Friday and I’ve felt comfortable in the car all weekend.” Ricciardo added: “I’m clearly disappointed not to make Q3, especially as it was just half a tenth and that’s something I can find in myself.

“I lost a bit of time in the first sector on the last run. We had the potential to make Q3 so when you don’t do the perfect lap, it’s frustrating. As expected the midfield is really close but I’m feeling optimistic for a strong result.”

Meanwhile, among the drivers not making it into Q2, Red Bull Racing owned up on making mistake with regards to not sending Pierre Gasly out for the second run as they were caught out by the improving track conditions and others going for another run.

He ended up 17th. At the same time, McLaren’s Carlos Sainz had troubles with Williams’ Robert Kubica as the Spaniard was caught out by his puncture and had to slow down which cost him all the time to make it easily into Q2 like Norris. He was 18th in the end.

In a similar position was Racing Point’s Lance Stroll who reported that Haas’ Grosjean’s out lap cost him few tenths on his quick lap, which he needed to get out of Q1. He had to be content with 16th, when Sergio Perez will start Australian GP in 10th.

Here’s what happened with Mercedes and Ferrari at the front