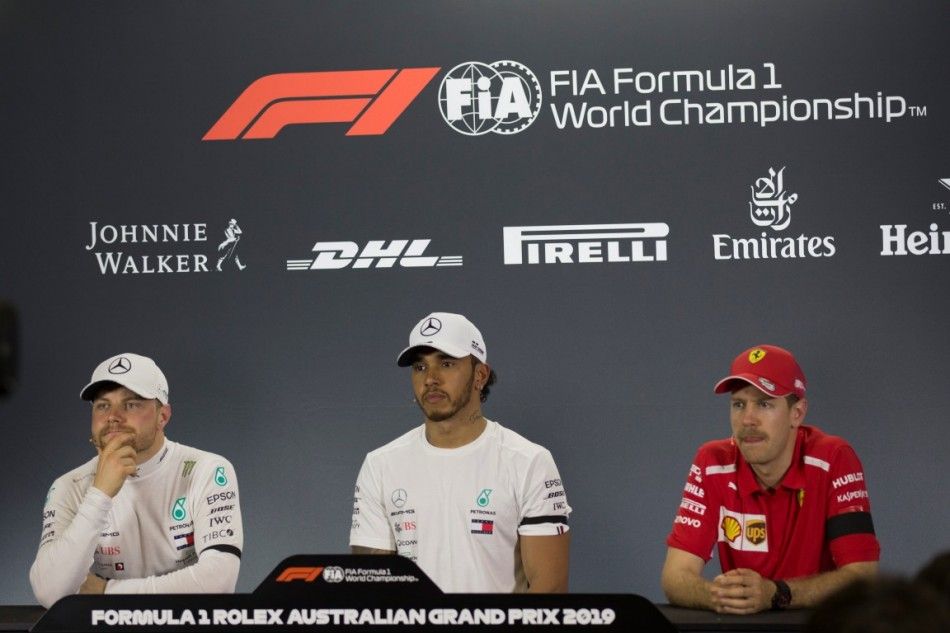 Mercedes and Ferrari drivers were on opposite spectrum after F1 Australian GP qualifying with Lewis Hamilton and Valtteri Bottas reveling the high run, while Sebastian Vettel could only lament the gap.

Already on Friday, it looked like Mercedes had picked up some time and positioned themselves well for the Australian GP weekend with Hamilton topping all the three practice sessions while Ferrari had a difficult time – which was said to be sandbagging.

It was expected that they will pounce on the opportunity on Saturday which they did to a certain extent, but still fell short by a big margin of 0.704s when Hamilton took the Australian GP pole with Vettel only third, beaten by Bottas as well.

Meanwhile, teammate Charles Leclerc wasn’t in the picture with the Monegasque not very happy with his Q3 lap which meant he was beaten by Red Bull Racing’s Max Verstappen to end up fifth. Speaking to the media, the Mercedes drivers were upbeat with their run.

Hamilton was especially pumped up looking at how close the field was, which was at one point separated by a second only. He was a bit downbeat on his first Q3 lap which he normally does well on, but was happy he could get the second one in.

“The second lap was definitely a lot better than the first, which is not always the case,” started Hamilton. “It’s always quite difficult on the second lap to pull that amount of time out. But on the first lap I made a mistake, which is unusual for me.

“It was OK, I just brushed it off and kept moving. We just kept working away, chipping away at our pace and our balance throughout the weekend. As I said, coming from Barcelona, we made some really big steps forward in the last couple of days with set-up and we brought that here and it seems to have worked.

“There was also a little bit of work done after that two weeks, were we analysed everything and made some small corrections. I really was not expecting to see the performance difference that we have here.

“It had been so close throughout the whole weekend between us all. It’s amazing to see how close the top 16 are, I think there was a second between us all at one point. That’s a real positive for rule regulations.

“It’s a bit difficult when you have a session like that to grasp exactly what just happened but I’m very proud to be up here and very grateful for everyone who has worked so hard throughout the winter and this couldn’t be a better way to start the year.”

Later on Hamilton repeated his words from testing where he said he genuinely felt that Ferrari are ahead after the post-test analysis. Even on Friday, he felt that the two teams were on par if not better than each other, but then Ferrari dropped off.

Vettel though was not 100 percent happy with the balance on Friday, which he talked about again after qualifying. His small off moment in Q2 did not throw the car off as he said and that everything worked fine with the lap – it was just lack of performance for some reason.

“I tried, obviously, to find the limits in Q2, and went a little bit over the limit,” said Vettel “Fortunately the car was fine. Q3, run one, or generally Q3 was fine. Overall, that fortunately did not impact our qualifying.

“I think everybody is surprised [by the result] – probably even themselves. I think yesterday we didn’t have a good day. Today felt better but in terms of gap and pace, it was very similar. For sure there’s some homework for us to do to understand.

“I still think we have a great car and we should be better than this – so I’m looking forward to the race. We have 58 laps to get a proper read of where we are – but certainly Mercedes are the clear favourite if you have such a big gap and comfort throughout qualifying.

“All the sessions. We’ve got to live with it today but tomorrow is a new day. We’ve done it before, around here especially, so, we’ll see.” When pressed further, Vettel somewhat elaborated on where the Ferrari SF90 is lacking.

“I think a little bit of everything,” Vettel started. “I don’t think the straightline is a problem, so I think we are quite competitive down the straights but I think we’re just losing in the corners. There are 16 corners around here and I think it’s a fairly even spread.

“So far it was more in the medium and lower speed stuff rather than the high speed stuff which, I would say,  also speaks for a strong car in general. I haven’t got the balance yet which maybe I would like to have, especially in lower speed.

“And with it not the confidence and trust which again, around here, can make a big difference because it’s a bumpy track. But given the gap is so big [to Mercedes], we must lose time in more than one place, for sure.”

As mentioned, while Leclerc was not so happy, on the other hand, Bottas was blown away by his and the team’s performance. The Albert Park circuit isn’t one of the Finn’s strong tracks but he managed to get a lap together and deliver when it mattered.

“I’m a little bit blown away about the performance we had,” he said. “Obviously Friday was looking good but it’s always practice. I don’t think anyone in the team could have imagined we’d be in this position after the testing.

“From my side, I really enjoyed the qualifying. We made some changes [after FP3] and really felt more confident in the qualifying and got some nice, clean laps. The first lap in Q3 was pretty good. I was quite happy with that.

“I knew that there was still something to improve in the second run but for some reason just lost some time in the first couple of corners. Historically, it’s not been the best track for me, honestly. I’ve never felt like I’ve had a great qualifying or race here for some reason.

“I think I managed to build it up well this weekend. Really started from zero this weekend, trying to learn session by session, and was pretty pleased with the car and driving and the main thing, in the qualifying, especially the first lap in Q3.

“I was really enjoying the driving and that’s when the lap-times were good. So, yeah, obviously there were still things I could have done better, as Lewis showed in the last lap, but it was close enough – so much better, for example, than the year before.”